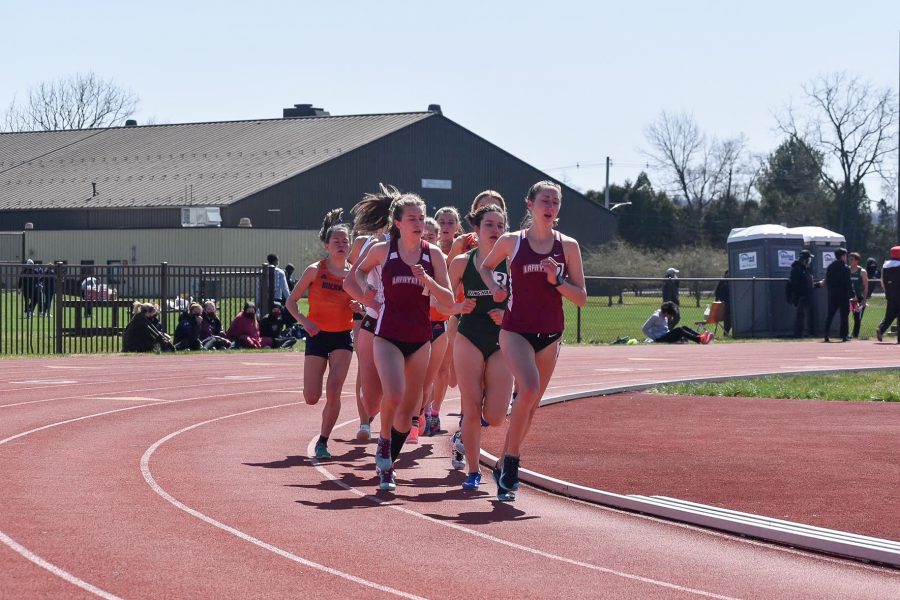 Both teams finished in eighth place at the outdoor championships. (Photo courtesy of Athletic Communications)

Last weekend was one for the record books for the Lafayette track and field team. Ten new times were entered into the school’s All-Time Top 10 list, including two Lafayette records broken at the two-day Patriot League Championship event.

Senior Ryan Branch broke one of the longest-standing Lafayette records in the 5,000-meter run, shattering the previous mark set in 1984 by Jeff Parker by a full five seconds. Fellow senior Ainsley Jacobs broke her own school record in the 5,000-meter run that she set just a few weeks ago.

Both the women’s and men’s teams finished in eighth out of ten and nine teams, respectively, in the season’s final meet.

“It was definitely bittersweet to toe the line at the Patriot League Championship for the last time,” Jacobs said. “It is the meet everyone works to qualify for all season and it is always extremely exciting and rewarding to make it there.”

The first day of the biggest meet of the season started off with Jacobs in the 10,000 meter run, where she raced off to a quick start. She earned third place overall with a time of 35:54:12—the third fastest time in school history for the event.

“I was happy that I was able to run a personal record and improve upon the school record despite running on tired legs,” Jacobs said. “I almost considered not doubling back for the 5K at Patriot Leagues since it would mean 9.3 miles of racing for the weekend, but I am glad I ended up running.”

Jacobs has become well acquainted with racing on tired legs this spring, recently breaking an 18-year-old school record in the 5,000-meter run. She said it felt “great to stand on the podium” once more and score points for her team.

“It was really special that I got to share that moment, and many other moments from that weekend with my best friends,” Jacobs said.

Jacobs also recalled the overwhelming feeling of team camaraderie around her during the final meet.

“Five of my teammates were running the 5K as well, so it was super exciting to just get hyped up together and encourage each other before the race,” she said. “The race ended up being extremely fast and me and my teammates were pushed for some great times.”

Senior Olivia Barney had a standout performance in the throwing events, finishing fourth overall in the hammer throw with a top mark of 54.28 meters. Barney’s toss was a personal best and the fourth furthest throw in school history for the event, earning five points for the Leopards in the process.

“I felt like each throw was my last chance to leave my mark on the team,” Barney said. “When I was done, it was sad, but I knew I did everything I could in the moment.”

Barney also holds the fifth best all-time Lafayette mark in the discus. Naturally, she takes pride in seeing her name among the best times in school history.

“I know now for years in the future, athletes will look at my name and see the impact I had,” she said.

The Leopards also scored some points in the team relays on both the men’s and women’s side. Sophomore Katie Riley, senior Lizzie Harmon, freshman Mikayla Randall and sophomore Alex Avery teamed up for the 4×800-meter relay and placed fifth overall to score four points in the event.

The men’s 4×800 relay team of juniors Jesse Schmeizer and Ryan Murphy and freshman Sean Hamilton and Willie Marina also made the scoreboards in sixth place, scoring three points for Lafayette.

Rounding out the point scorers from day one was junior William Prebola, who finished seventh overall in the javelin with a top throw of 61.25 meters. Prebola’s toss marked a new personal best and landing him eighth in Lafayette school history for the event.

After the first day, the women sat in fourth place with 11 points while the men were in seventh with two points.

The Leopards picked up right where they left off on the second day of competition, breaking the two school records and entering a handful of times to the All-Time Top 10 list.

Sophomore Rachel Hurley finished sixth in the steeplechase, kicking off the scoring action with three points and recording the fourth fastest time in school history for the event. The women’s 4×400-meter relay team of Riley, Harmon, Avery and senior Emily Becker entered the scoring sheet with an eighth place finish that added another point to Lafayette’s total.

Junior Autumn Sands hit a new personal best and landed herself third All-Time in school history in the 5,000-meter run with a time of 17:11.18. Not to be outdone, Jacobs also broke her own school record set earlier this season in the event with a time of 17:00.39. Despite setting Lafayette records, neither of them scored in the event.

“My team has been through a lot in the past year, and we kept talking about how grateful we were to be there and how there were so many times we thought we wouldn’t make it because of just another thing getting in the way,” Jacobs said.

Three more women entered the Lafayette All-Time Top 10 list in the 5,000-meter run: Sophomores Dannah Javens and Becky Hartman, and senior Gabi Galletta all finished with times good for sixth, eighth, and ninth all-time in school history for the event.

“We’ve had six girls get on the Top 10 list this season which is an amazing accomplishment and a testament to both our hard work and dedication and the work of our coach,” Jacobs said.

On the men’s side, Branch broke the school record and finished fourth overall in the 5,000-meter run with a time of 14:30.18, adding five points for the Leopards. Junior Isaiah Moore added 0.5 points to the team total with an eighth place finish in the high jump to finish off the Lafayette scorers on the day.

The meet was the final competition of an unusual spring season for the team, with a shortened schedule, missed games due to contact tracing and a number of athletes kicked off campus for COVID-19 violations in January.

The women and men both finished the meet in eighth place, with 19 and 10.5 points, respectively.

Despite an unusual season that lacked the typical busy outdoor schedule, many of the players said they were just grateful to compete this spring. And some of them are already nostalgic.

“I’ll miss being surrounded by amazing people who love the same sport I do,” Barney said. “Track and field has caused me a lot of stress over the years, but everything has been worth it. I truly love the sport and I am sad that it is over, but I am excited to find new passions out in the real world.”

“I will miss everything about being on the Lafayette cross country and track and field teams,” Jacobs added. “I have made the best friends in the world through being a part of this team and I wouldn’t trade it for the world. I will miss all the camaraderie that comes with being on this team and having a support system like no other.”