‘Just keep plugging away’: The future is bright for the men’s lacrosse team despite winless spring 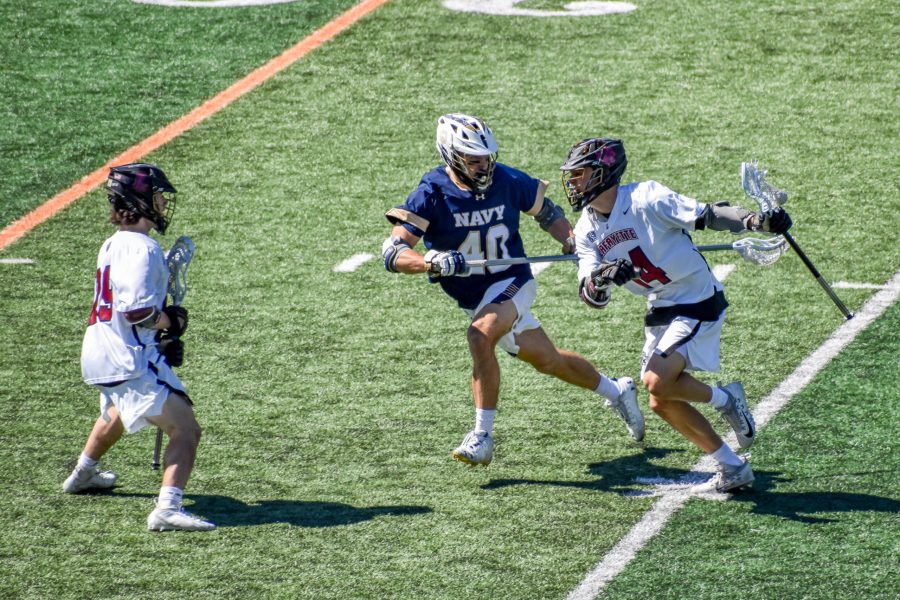 Freshman attacker Peter Lehman (right) was named the Patriot League Rookie of the Year and led the team in goals this season. (Photo courtesy of Athletic Communications)

The Lafayette men’s lacrosse team went 0-11 this spring, but you wouldn’t know it talking to head coach Pat Myers.

In the highly competitive Patriot League, wins are hard to come by in the sport. Myers already knows this, as his squad hasn’t beaten a conference opponent during his three seasons on College Hill.

But what the lacrosse team does have is a budding program stacked with talented young players and a coach who believes in taking it one step at a time. Despite the uphill battle, Myers embraces the challenge.

“This season from the get-go was about making progress as a program,” Myers said. “It’s always been about creating a winning program, not necessarily a winning season at this point.”

Consider the progress made. A year ago, during a pandemic-shortened spring, Lafayette played five games against ranked opponents and lost all five by an average of 11 goals. Not exactly a razor-thin margin.

This spring, the Leopards faced an identical five ranked teams and once again lost each game. But this time, the average margin of defeat was just 5.6 goals, including a three-point loss to undefeated and seventh-ranked Lehigh in mid-April.

“I think our guys are very self-aware that we are building something here,” Myers said. “We’re starting from the bottom and working our way up. I think they were excited with the progress they saw on the field.”

Myers said the team got better as the season wore on, evidenced by three narrow losses to ranked opponents. The Leopards dropped games to seventh-ranked Lehigh (11-14), 19th-ranked Loyola Maryland (7-11) and 12th-ranked Navy (10-14) to wrap up the spring.

While the top-tier competition doesn’t necessarily translate to a gaudy win-loss record, it does force the players to work hard and be their best.

“That’s why kids want to play at Lafayette and why they want to be a part of this program and what we’re building,” Myers said. “They know that they’re playing in a really competitive league against top-15 teams week in and week out.”

“And we embrace that challenge,” he added. “It’s forced us to raise the bar for this program.”

A gigantic freshman class has played a significant role in raising that bar. The team boasts 19 first years on a roster with 51 players, and many of the young guys have already made their mark: the Leopards’ four top goal-scorers are all freshmen.

Despite beginning their collegiate careers without the usual ‘fall ball’ leading up to the season, the new players “came in and made their mark right away.”

“While they had a ton of success this year, and I’m incredibly proud of them, I think what makes them unique is their humility and their work ethic, and knowing that they’re scratching the surface,” Myers said. “They are already ready to get back in the weight room and get back to work.”

Freshman attacker Peter Lehman is one of the many young talents on the Lafayette roster, leading the team with 20 goals and tying for the top spot in points with 24. Lehman was honored as the Patriot League Rookie of the Year on Tuesday, but he wouldn’t take any of the credit for himself.

“It definitely feels good, but those individual awards really are team awards,” Lehman said. “It’s better to see us making progress as a team.”

Lehman isn’t the only rookie atop the statistical leaderboard for Lafayette. Fellow first-year attackers Charlie Cunniffe and Carter Cecil are second and third, respectively, in goals. Five of the top six scorers on the team are freshmen, and the sixth—Macklin Fitzpatrick—is a sophomore.

“Just seeing the leaders of the team settle into their roles and seeing these young guys really blossom out on the field, obviously starting with Peter, was really fun to see,” Myers said. “It leaves you going into the offseason with a ton of excitement.”

This past Saturday’s game against Navy also served as Senior Day for the team’s five members of the graduating class. Co-captain Bryan Hess, and classmates Jake Floyd-Jones, Andrew Robbins, John Natoli and Gabe Smithline were honored during a pregame ceremony.

The team’s class of 2021 has gradually dwindled over the past few years, with some turnover occurring during the coaching transition after the sudden passing in fall 2017 of freshman McCrae Williams, who was going to be a goalie with the program.

“Anytime there’s a transition…you have to start from scratch,” Myers said. “The commitment to the Lafayette lacrosse lifestyle is not for everybody. But the guys that stuck with it over these last three years I’m incredibly grateful for.”

Above all, many of the players simply enjoyed the chance to compete this spring. While the team didn’t quite get their normal slate of games, this season was nearly twice as long as the one last spring.

“The opportunity just to be out there with the pandemic was motivating in and of itself to be able to play the game that we love,” Myers said. “They just kept their heads down, kept working, kept getting better and fought to the very last whistle.”