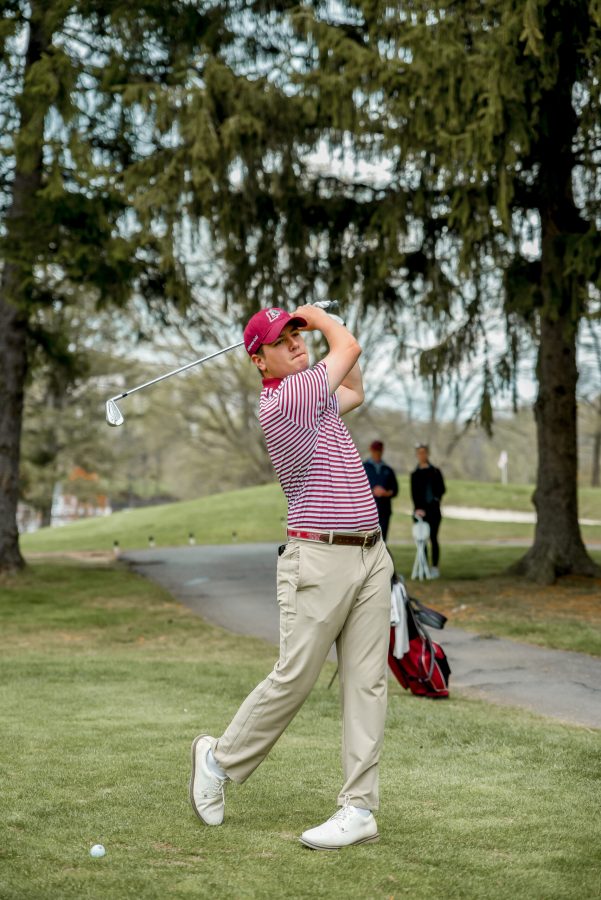 Lafayette had three players finish in the top five at the championships. (Photo courtesy of Athletic Communications)

A consistent year for the Lafayette golf team ended with a podium finish last weekend in their final match of the season at the Patriot League Championships. Four Leopards placed in the top 10, including three who tied for third.

Lafayette placed third overall out of eight teams with a score of +45 at the United States Naval Academy’s par-70 course. Their third-place mark was the fourth time this season that the team earned a top-five finish.

The championships consisted of three rounds over the course of May 1-2.

After the first round, the Leopards sat at 12-over par and in second place – four strokes behind frontrunner Loyola Maryland. Junior Kazuki Osawa finished round one with a score of 71, just one shot over par and good for second place on the individual leaderboard. Senior Brendan Cronin and junior Ryan Tall both shot a 72 and tied for fourth place after the first round.

After round two, the Leopards still clung to second place; but the team was nine strokes behind first place Loyola Maryland, while Navy was on Lafayette’s heels and only two strokes back from second.

The Leopards let their lead over Navy slip during round three and ended up in third place, but senior Cole Berger bounced back to shoot a tournament-low score of 69.

In doing so, Berger rocketed from 15th to third place during the afternoon. His third-place finish was his second consecutive top-10 finish, and his final round of 69 was equaled only by Loyola senior Brandon Berry, who won the tournament.

“My putting was amazing on the final day,” Berger recalled. “My pace control was much better in the final round and it allowed me to save par on a few very long putts. On 17, I had a 60-foot two-putt to keep me at -1.”

Berger wasn’t the only Leopard to finish in the top five: Osawa and Cronin tied him for third as all three finished +11 for the tournament. Tall, who entered the day tied for fifth, ended up tied for ninth place with a score of +13. Sophomore Martin Vanhaelst finished tied for 27th overall with a score of +25, while junior Drew Steiner finished 45th with a score of +43.

The Leopards finished in third place, just a stroke behind Navy and 19 behind winner Loyola Maryland.

The team will graduate four seniors this spring, including co-captains Berger and Cronin, as well as Alec Cwienkala and Creighton Hendrix.

“Towards the end, I was more emotional because I knew it was my last few holes in college golf,” Berger said. “That honestly made the birdie on 16 bittersweet.”

Berger, Cronin, Osawa and Tall were all recognized for their outstanding play by the conference: Berger, Cronin and Osawa received All-Patriot League First Team honors, while Tall earned a spot on the Second Team and was just two strokes back from being on the first.

The Leopards will welcome in some new faces this fall as the team has just eight returning players.

“Everyone is going to have to go out and earn it,” Tall said. “Next year we have a large freshman class coming in. We are encouraged that those guys can hop in and get a lot of experience.”

The Leopards will likely return to their normal schedule next fall – with a full slate of competition before the 2022 spring season.