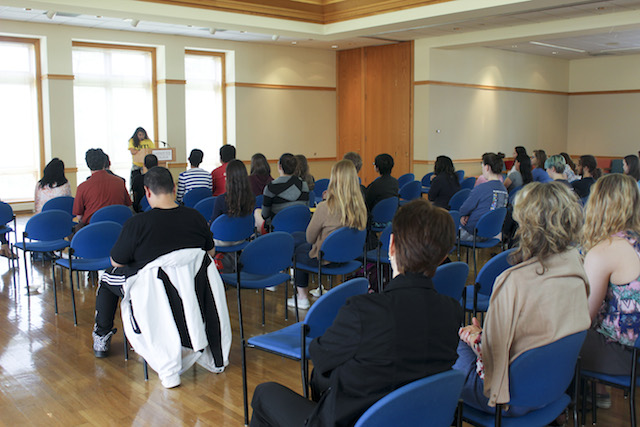 Anastasia Gayol Cintron
Poet Jared Harel reads at and judges the annual Jean Corrie Poetry Reading
Poet Jared Harel walks up to the podium with a collegiate swagger. With his hands in his pocket, slouched over a bit and a confident grin, his boyish presence pervaded throughout his reading on last Tuesday at the Jean Corrie Poetry Reading & Ice Cream Social.

One of the highlights of the Spring calendar for English majors and poetry aficionados, the reading is a celebration of the Jean Corrie Poetry Competition, where sophomores, juniors and seniors submit their work to an accomplished judge who then reads at the social.

This year’s winners, Christine Calella ‘16 and Nicole Bauer ‘16, were judged by Jared Harel, a highly accomplished poet whose works have appeared in publications such as Tin House, The American Poetry Review, The Threepenny Review, The Gettysburg Review, The Southern Review, and Ecotone. His poetry chapbook, the Body Double, was published in 2012 and focuses on variations of fantasies about doppelgangers.

Living in Astoria with his wife and daughter, Harel incorporates much of his family life into his work. The dynamic between him and his wife professionally—as she is an attorney and he is a poet and musician—is the source of much poetic comedy and self-ridicule. One of the poems he read, “Go So You Can Come Back,” is a piece inspired by something his wife tells him whenever she urges him to get things done. The poem is a beautiful telling of the scattered and eccentric mind of an artist trying to accomplish small, everyday remedial things.

“Go but don’t linger in frozen foods or forget where you parked or chat up the cashier,” he read, interpreting his wife’s plea in the piece.

Most notably in his reading, Harel is able to connect with an earlier time in his life, namely his high school and college years. Being a drummer in a NYC-based rock band, The Dust Engineers, he has this cool adolescent vibe about him. One of his pieces is about actually skipping senior-skip day. In his poem, “Senior Cut Day” he embodies what it is like to be young and feel important. There is this twinge of nostalgia as he read, but also this tragedy in the temporary moment he has pulled us into from a less complicated time.

Following the open-mic, was pizza and a small question and answer session with Jared Harel where students were able to chat about the career of professional writing.

“You guys are, in many ways, my ideal audience…most of my life was spent in the same roles you guys have been in…it’s kinda my wheelhouse,” he said “I think it was Elizabeth Bishop who said, ‘anyone who has survived childhood has enough material to last a lifetime.’”