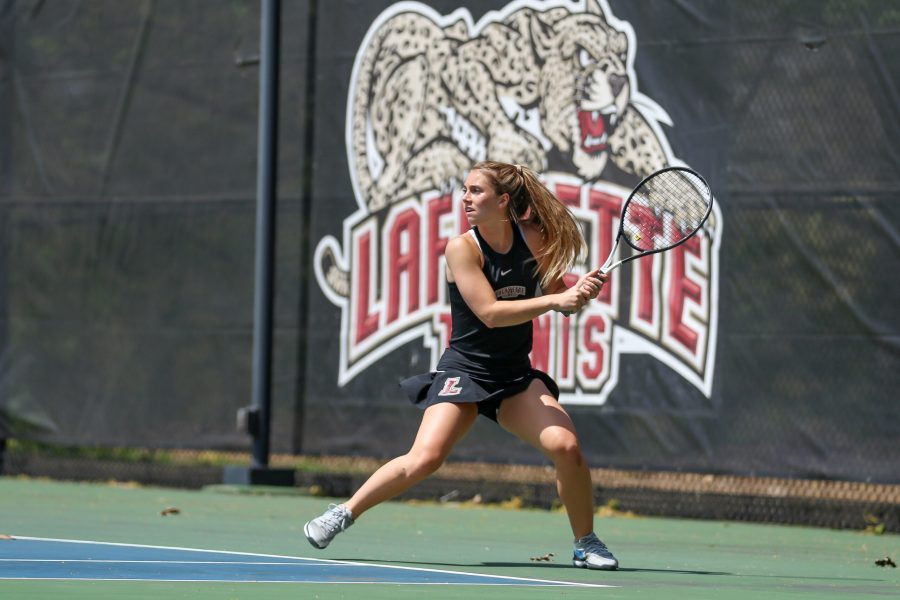 The end of the season was identical to how the Leopards finished in spring 2019. (Photo courtesy of Athletic Communications)

The Lafayette women’s tennis team got bounced from the Patriot League quarterfinals last weekend after a 0-4 loss to top-seeded Boston University (BU). The Leopards reached the quarterfinals after a 4-0 win over Holy Cross on Thursday, April 29 in the opening round.

The end of the season was identical to how the Leopards finished in spring 2019, with a 0-4 loss to the Terriers after a 4-0 win over the Crusaders.

The Leopards did not drop a set in either singles or doubles in a dominant performance over a winless Holy Cross team. The senior duo of Cece Lesnick and Samantha Snyder won their doubles match 6-1, while sophomore Melanie Sparhawk paired with senior Ruthie Wilson and won the second doubles match 6-0, giving the doubles point to Lafayette.

“Going into both matches, we knew that nothing was going to be given to us,” said junior Maureen McCormack. “We had to go out and give it our all, which I can attest that the team and I both did. The team’s confidence propelled us to beat Holy Cross.”

Sophomore Jessica Siegel won both of her singles matches, 6-0 and 6-1, for her team-high sixth singles win of the season. Lesnick and Sparhawk followed suit, winning their singles matches 6-1 and 6-2, respectively. McCormack, Snyder and sophomore Halle DeNardo did not finish their single matches as the Leopards clinched the win while they were still playing. All three players were leading when the matches ended.

On Friday in the quarterfinals, the Leopards faced top-ranked BU in a quick turnaround. The Terriers flipped the script on the Leopards, dominating doubles play and setting themselves up for victory.

Snyder and Lesnick fell 6-1 in their doubles match, while Sparhawk and Wilson lost 6-0. McCormack and DeNardo were trailing 4-3 at the time their match was stopped as BU had clinched victory.

Snyder, Siegel and Lesnick all dropped their single matches.

“Given all of the hurdles we had with COVID, I think this team did a great job,” McCormack said. “We had some great wins like Holy Cross and some extremely close matches like Saint Joe’s and Colgate.”

The tennis team was not without their fair share of challenges this season, as a number of their matches were either postponed or cancelled due to COVID-19 outbreaks. The team’s small roster was less beneficial than one would think.

“If one person on the team contracted COVID, three more members of the team had to quarantine,” McCormack said. “This drove down our numbers for matches and, because of it, some matches had to be canceled.”

Other games were canceled or postponed due to out-of-state restrictions, limiting the team’s ability to get ready for conference play. This spring, the Leopards played about half as many games as they usually would.

“Some teams like Siena and Marist we were unable to play [against] because of COVID restrictions with their school and state, which was upsetting to us as we enjoy those matches and they built up our schedule,” McCormack added.

Aside from the challenges of a pandemic-shortened season, many of the players were simply grateful for the opportunity to compete this spring.

“I think the team really just enjoyed the ability to go out and play again after COVID abruptly ended our season last year,” McCormack said.

As the team recoups and looks toward next year, there is also a focus on recovering after the long, difficult season.

“To prepare for next season, I think the team needs to have fun in the summer, play some tennis, relax, and stay connected with each other,” McCormack said. “I think that the closeness of our team this year helped us win matches. So I think if we could maintain it, that would help us even more.”