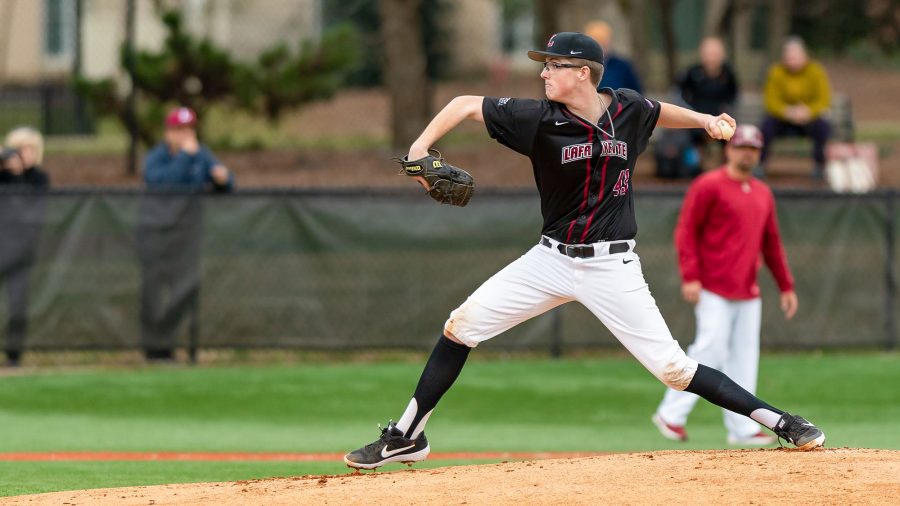 Woodward made his first appearance for the Low-A Clearwater Threshers on Tuesday. (Photo courtesy of Athletic Communications)

When the Low-A Clearwater Threshers released their roster for the 2021 season, there was one noticeable name that jumped out from the list, at least if you’re a Lafayette fan: JP Woodward.

Lafayette’s lefty ace last year, Woodward signed with the Philadelphia Phillies after the 2020 MLB draft was cut down to only five rounds.

After getting signed by the Phillies, it was not guaranteed Woodward would be on a team this year. Minor league baseball has four affiliate teams and then extended spring training for players who did not make one of the teams. Spring training is where teams decide which level a player will be designated to.

The turnaround from spring training to the season is short, only a few days in fact, and Woodward saw his first action as a minor league baseball player this past week on May 4.

“It was really cool to soak in all the fans and the atmosphere,” Woodward said. “It was dollar Tuesdays so even though it was limited capacity it was great to have fans enjoying the game. There were people standing over the bullpen talking to us and kids asking for baseballs nonstop. It was really cool to have that experience.”

Woodward is currently on the roster as a bullpen pitcher. His first action came in the Threshers’ opening night loss to the Lakeland Flying Tigers on Tuesday. Woodward pitched the ninth inning, allowing two hits and one run.

“I sat in the bullpen all game with the other pitchers watching the game and then the pitching coach called down and said ‘Woodward get hot’ and I got ready to go and throw,” Woodward said.

The biggest change from a college player to a professional one is typically the mindset change, and for Woodward, that was no different.

“My mindset has certainly shifted since reaching the pros,” Woodward said. “At Lafayette, the focus was on playing perfect. I was a walk-on at Lafayette and I don’t think I ever got the attitude that I could go out there and believe I could beat anyone I was facing.”

Now, however, Woodward has the confidence to know he belongs.

“Since I’ve gotten to the pros, I really feel like I can play with anyone and I think that’s been my biggest advantage and one of the reasons I did so well in spring training,” he said. “I’ve realized I have to trust all the work I’ve put in. The move from Lafayette to the pros has been a huge culture shock and there is a great difference competitively, but at the same time I think it has helped me immensely with my mindset.”

Another noticeable jump from a college to professional season is the number of games played. Lafayette typically plays in the range of 50 to 60 games per year, while class-A leagues play a 120-game schedule. The game day schedule is a bit different, too.

“March 4 was the first day of reporting to my Low-A team,” Woodward said. “The team gets to the stadium around 1 or 2 for lunch and then we hang out in the clubhouse for a while. Pitchers can help out during batting practice in the late afternoon because the games are at 7 p.m. every night. As a pitcher, an hour before the game we start to lock in and play catch. [We] sit in the bullpen during the game until our name is called.”

Although he is new to professional baseball and has only been on the Threshers for a few days, Woodward did not seem intimidated by starting over on a new team.

“I don’t think my role on the team has been all that different,” Woodward said. “College baseball relies a lot more on leadership with juniors and seniors. Professional teams are more like a brotherhood, it’s not as reliant on leaders. The age range is all over the place, from high school draft picks to guys who are 24.”

“We realize we are all in the grind together because minor league baseball can be tough so I think the power structure is different and I think it’s a different atmosphere and it’s more competitive on the field,” he added. “There’s a bit of a duality to it, but the atmosphere has certainly helped me a lot and we learn from each other each day since we all come from such different backgrounds.”

Woodward’s season continues tonight, May 6, at 6:30 p.m. with another game against the Flying Tigers.