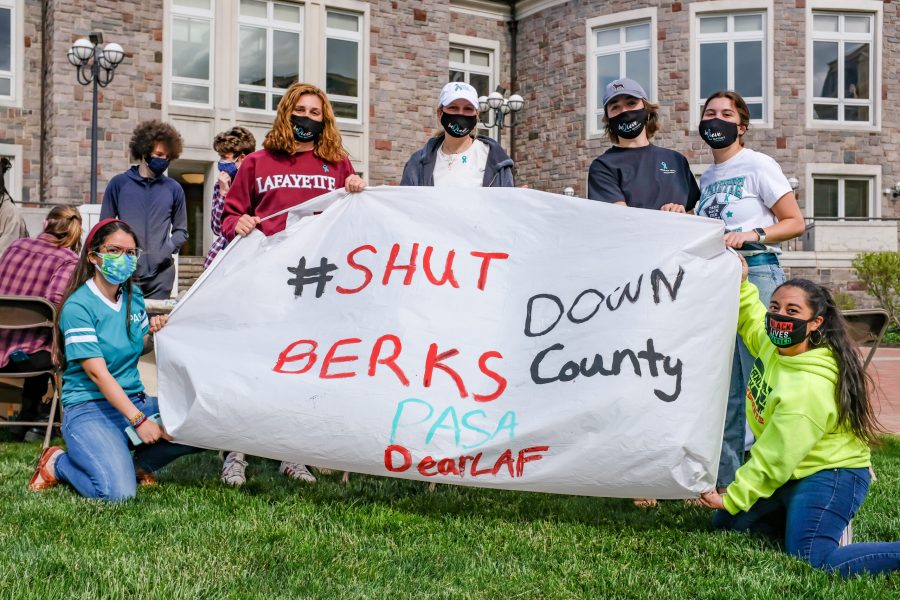 Students and campus activist groups gathered on the quad at the "No More Cages Protest" to call for the closing of the Berks County Detention Facility, a center for Immigration and Customs Enforcement that is about an hour away from College Hill.

Sporting “Black Lives Matter” masks and brandishing “Abolish ICE” signs, students gathered in protest to shut down the nearby Berks County Immigrant Detention Center last Friday. The “No More Cages Protest” was organized by the Dear Lafayette College Coalition and garnered support from other activist groups including Pards Against Sexual Assault (PASA), the Refugee Action Committee, the Hispanic Society of Lafayette, and about 50 other students.

The Berks County Detention Center has incarcerated children as young as two weeks old and held families for over a year at a time, according to the Pennsylvania Immigration and Citizenship Coalition, an organization also aiming to shut down the facility. In 2019, a Honduran woman brought a lawsuit against the facility alleging that officials failed to help her while she was repeatedly sexually assaulted by a staff member. The suit ended a week before trial with a $75,000 settlement, according to reports in The Morning Call.

Students gathered to protest this and other alleged rights violations at the facility.

“It was a protest to shut the detention center down because of the sexual and physical abuse that occurs there. We had tables for phone banking, writing letters to representatives, and making signs,” President of PASA, Ella Goodwin ‘21 explained.

“It’s been a goal of ours to ensure that we are bringing an intersectional approach to sexual assault. It’s an issue at our college that affects individuals of all identities. We at PASA were playing more of a supportive role. Dear Lafayette put in a lot of work in terms of research and planning. A lot of the credit for the idea and the work behind it goes to them,” Libby Mayer ‘21, vice president of PASA, added.

“The whole purpose of the protest in the first place was so that people not only came in solidarity but also to bring awareness to the campus. Lafayette as an institution holds a lot of power. We were able to bring noise from the students and bring awareness to powerful people, like Senator Bob Casey or Mayor Panto,” Caceres said.

For many members of the Lafayette community, immigration issues are closer to home than they appear.

“It’s easy to think that it’s something that doesn’t happen near us, but Berks County is only an hour away. It’s a powerful thing for us to come together and take a stand against something that affects different groups of people,” Mayer said.

While the protest gained broad support from a coalition of activist organizations and students alike, MOSAIC Officer and Dear Lafayette BIPOC Ally Kimberly Manalang ‘21 made it clear that further action must be taken.

“This is only the start. It’s sad we haven’t seen these types of protests in the past because the detention center has been around for so long. We need to continue and not let off the pressure,” Manalang said. “This is a long-term fight.”