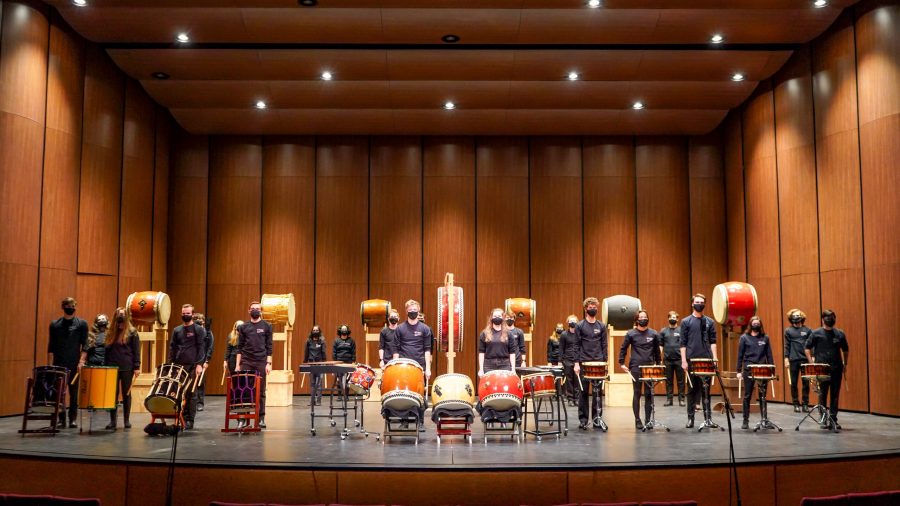 Percussion ensemble recorded their performance for this spring, which can be viewed on the college website. (Photo courtesy of Larry Stockton)

After almost a year apart, music ensembles on campus reunited in-person this spring to experience the joys of live performance once again. And as the semester comes to a close, ensembles deliver their final performances, held in a mixture of outdoor, in-person, and virtual shows in a triumphant return to live music.

For the percussion ensemble, Director Larry Stockton said the group’s preparation leading up to their final performance was more intense than ever.

The concert was streamed virtually on Monday night, and can still be viewed on the arts section of the Lafayette website. They performed a variety of pieces separated into duets and smaller groups with music ranging from African Drumming to Japanese Taiko.

Stockton credited the ensemble for all of their hard work and dedication, even through a pandemic.

“I have never been more proud of any group. Everyone was there all the time and put in 100% effort,” he said.

Anna Zittle ’22 conducted the group’s performance of the Beatles classic “Daytripper,” which she claims as a highlight of her percussion experience.

“It was an immense privilege to be able to conduct and I’m really grateful to Doc. Stockton for allowing me to do that this semester,” she said.

The orchestra managed to beat the rain last Sunday afternoon and perform outside. A streamed video of the event will be streamed sometime next week.

Bassist Ben Putnam ‘24 said he is thankful to be performing live again after a year of virtual events.

“It was extremely rewarding to have that in-person concert on Sunday because it means that all our efforts didn’t result in another virtual event,” he wrote in an email. “Although virtual events are useful for a lot of things, I think music is where they fall short. Music in person is so much more powerful.”

However, the group’s semester as a whole has looked very different than in previous years. The ensemble split up into two practice groups to adhere to COVID guidelines, limiting the semester to only string players, according to Orchestra Director Lewis Baratz.

Nonetheless, Baratz said he is thankful for the opportunity to meet with his students in person again. He acknowledged their effort and ability to step up to plate, even in unusual circumstances.

“Most of the people in the ensemble are STEM majors, so I feel that music is so valuable and I’m very happy that they were able to express that with their peers that they have not been able to within the year,” he said.

The jazz ensemble, led by Matt Vashlishan, performed their final concert in person on Wednesday, May 5. Drawing a large crowd, the concert showcased the hard work that the group put in all semester.

Having a seven person band compared to the ensemble’s usual 18, Vashilian was faced with a unique set of challenges that mainly included rearranging pieces to tailor to the group’s small size and ratio of musicians.

Despite that obstacle, Vashilan said that students remained positive.

“I could not have asked much more out of their attitudes, given the circumstances,” he said.

For her first semester on campus, Sophia Kosednar ‘24 said she is thankful for the ensemble for giving her an experience of what life looks like on the other side of the pandemic.

“This ensemble has been challenging, but also really rewarding,” she wrote in an email. “It was out of my comfort zone to be in such a small band, but I was able to get close with everyone, and definitely find my voice—both musically and socially.”

And for music ensembles that are still preparing for final performances, the work is not yet done.

The concert band, directed by Kirk O’Riordan, has been in the process of putting together their performance through video recordings, which will be streamed through the Williams Center for the Arts on May 22.

The program includes a combination of student conducted pieces such as Morten Luridsen’s “O Magnum Mysterium” led by assistant conductor Katie Rice ’21 and the world premiere of “Toward an End Yet Unseen,” composed by Justin Kogisaka ’22, which replicates what happens when a virus enters the body.

O’Riordan recognized the challenges that this year has brought, namely that maintaining social distance has made cuing during rehearsals more difficult. However, he said that his students have shown patience and collaboration to make the semester work.

“Everything we’re doing, we’re doing together,” he said. “I can’t tell you how proud I am of all of them. They’re amazing and they’ve kept me going through a difficult semester.”

The chorus ensemble, directed by Jennifer Kelly, has taken a unique approach to their final performance, which lies somewhere in the realm between a live concert and a perfected sound recording. The concert will be available May 15 at 8 p.m. on the college website.

Using the cross-platform app BandLab, students recorded their sound and blended their voices into one another. To accompany the music, they created visuals to tell the story of the songs, incorporating lakes and waves to coincide with an Afro-Cuban chant, social justice issues and an expression of gratitude toward first responders.

Given COVID-19 guidelines, the ensemble was not able to sing together in person, so they focused on rhythmic exercises, movement and kinesthetic learning.

“I don’t remember a time that I have been more proud of my students than this year, not only for the new skills that they’ve needed to learn in order to adapt, but also their positivity in doing all of this,” Kelly said.

“My number one takeaway would be that song expression is a human need,” she added. “This is all about the students. Everything that happens on Saturday night is because the students wanted it to happen.”