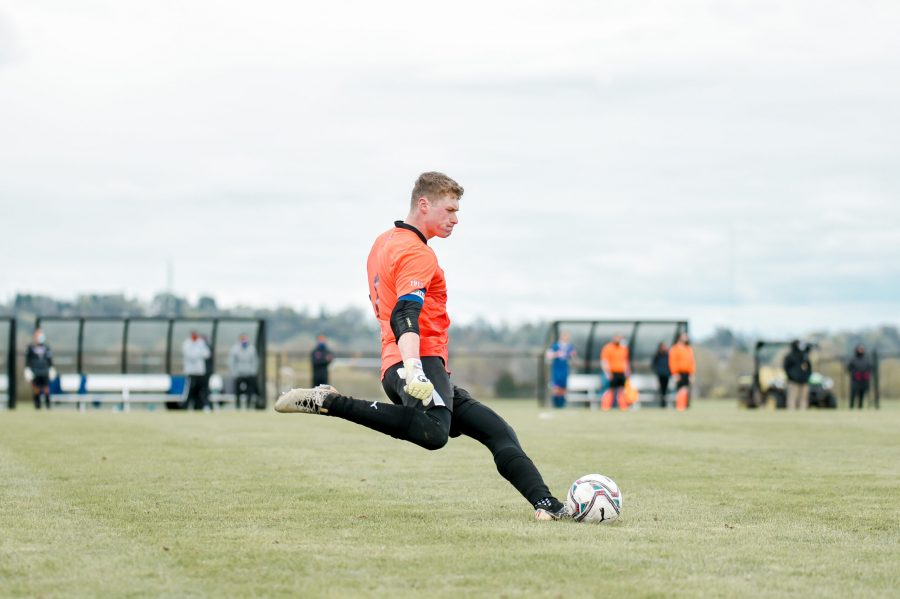 Sutton has started every single game in goal since arriving at Lafayette. (Photo courtesy of Athletic Communications)

The Lafayette men’s soccer team has seen tremendous success in the past two years, falling just short in the Patriot League Championship game in consecutive seasons. And one man has seen it all from the best vantage point on the field: goalie Alex Sutton, a junior who’s been the team’s starter since he first arrived freshmen year.

“I was not guaranteed the starting role when I came in,” Sutton said. “One of the primary reasons I came to Lafayette was because it is unique to come to a school with two other freshmen [goalies] and only one goalie in the grade above me.”

The fact that there was less competition gave him a much higher chance of playing and winning a starting spot, he said, provided he could prove himself on arrival.

“I made a decision to come here based on the fact that I trust myself and my ability,” he explained. “The opportunity was ideal.”

Although Sutton has started every game since he arrived as a freshman, he had no trouble adjusting to the collegiate pace and making an impact.

“On the field there was not a massive learning curve,” he said. “I’ve been preparing for collegiate soccer and practicing for that moment for my whole life. Even though the level is higher in college, it’s not too different from high school and club…I was ready.”

Sutton’s first season, the 2018-2019 season, was a far cry from the team’s two most recent seasons. Lafayette finished 5-8-4 that year, with a 1-5-3 record in Patriot League play, and failed to qualify for the Patriot League Tournament.

It only took a year for the Leopards to right the ship, however, as the team managed to go 9-7-5 in the 2019-2020 season with a a 4-3-2 record in conference play. The team qualified for the Patriot League Tournament and lost in a heartbreaker to Lehigh with a score of 1-0.

“I have to give a lot of credit to the senior class of last year,” Sutton said. “That was the year we took our biggest step forward from the previous year and that changed our overall mentality around the team.

“We began taking soccer more seriously and our focus became more centered on winning. Everyone wants to win but it is difficult to visualize winning when you are losing a lot. The seniors made things a little more serious and gave us the confidence to recognize that we can win.”

The Leopards backed up their strong play last year with one of the most dominant seasons in recent memory. Sutton was lights out for the Leopards, with two shoutouts and only two games where he allowed more than one goal.

“I was fortunate enough to be staying in Washington D.C. during the pandemic and as a result I was able to train with a professional team there,” Sutton recalled. “Another big reason I was motivated to stay in shape is because the team is such a close knit group of guys and we were in constant contact with one another. When one person went on a run they would send a video letting everyone know and that way we pushed one another to stay accountable.”

The team also sent videos of their workouts to each other and would build routines out of videos posted by other players. Sutton noted that some members of the team who lived near each other were able to train together while staying COVID safe.

The team’s commitment to staying in shape throughout the pandemic certainly paid dividends, as the Leopards went 6-0 in the regular season, all of which were conference matches. The team once again fell short in the Patriot League Championship, losing 2-1 to American in overtime.

“There is no way to sugarcoat it, losing consecutive PL Championships sucks,” Sutton said. “We recognize we can’t change the past so we’re just dealing with it and we’re focused on next season.

“Right after the loss the captains said watching American winning and celebrating a championship on our home turf should hurt and should add some salt to the wound. Therefore when we win next season it will feel that much better. We want to keep growing and understand that when we eventually lift that trophy it will be a great feeling.”

Sutton took the fall 2020 semester off and as a result, will be graduating in the fall of 2022 rather than the spring of 2022. Given the NCAA’s decision to grant athletes an extra year of eligibility, Sutton will be backstopping the Leopards for the next two seasons. After that, Sutton says it is his goal to play professionally.

“I still have a ways to go before [I can play professionally], but I think if I can become the best player I can be, I can help Lafayette be the best team it can be and I believe that will be mutually beneficial,” he said.

Sutton and the Leopards will be back in action in the fall and hope to capture the Patriot League Championship that has eluded them the past two seasons.