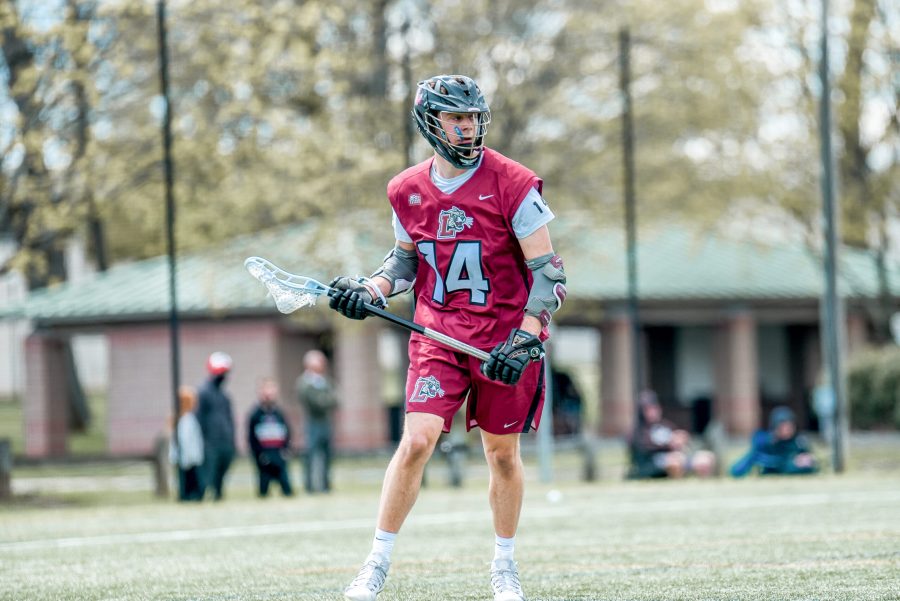 Lehman led the Leopards in goals and points this spring. (Photo courtesy of Athletic Communications)

Lehman, per usual, deflected all praise.

“It’s kind of credit to my coaches and teammates pushing me in practice,” Lehman said. “When we weren’t at school yet, my coaches and team did a great job of introducing the freshman to the program and getting us ready for what it was going to be like.”

The Leopards faced stiff competition this spring in a competitive Patriot League, including finishing the season with four close losses to ranked opponents. Although the team didn’t have an eye-popping win-loss record (0-11, 0-8 in conference), Lehman remains hopeful for the future.

“I think we made a lot of progress throughout the season,” he said. “We struggled to find our stride in the beginning of the season, but towards the end I think it all kind of came together and we played some really tough teams in close games.”

The Warminster, Pa., native and economics major came to Lafayette with a long list of high school accolades despite missing out on a senior season due to COVID-19.

“I’d say it was definitely weird adjusting because I didn’t have a senior season of high school and we didn’t have fall ball either, so it was a long time since I had played a real competitive lacrosse game,” Lehman said.  “My team and the coaches did a really good job of kind of bringing us freshmen in and having us jump right into it. I think that helped me and the rest of my freshman class get acclimated to everything.”

During his time at his high school alma mater Council Rock North, Lehman was a member of the National Honors Society and earned a spot on the distinguished honor roll, volunteered with a Bible School Camp and was a youth lacrosse coach. He was also named an Under Armour Underclass All-American in 2019 and earned All-Suburban One League (SOL) honors.

“What brought me to Lafayette is obviously just the really good academics here, and also what Coach Meyers is trying to build,” Lehman said. “He’s kind of starting from scratch, and I thought it’d be really cool to be a part of a team that has a goal of building a program up from the ground and getting better every day.”

Lehman says he was sold on Lafayette from the first time he stepped on campus.

“All the guys on the team are just really nice and treat each other with respect, and I think from the moment I visited here I realized that and it was just something I wanted to be a part of,” he said.

While all of his teammates were really supportive during his rookie season, Lehman pointed to senior co-captain Bryan Hess as someone he really looked up to. It appears Lehman’s not the only one.

“It kind of goes without saying that that’s the guy who everybody looks up to on our team,” he said. “You know he’s got your back, and he’s always going to be there for you. He’s just a really good kid and wants what’s best for the team and puts the team before himself, so I definitely looked up to him a lot.”

Lehman started every game in his rookie campaign, leading the Leopards in scoring with 20 goals and adding four assists for a total of 24 points on the year. He also picked up 16 ground balls and caused three turnovers, and is already excited to return to the team next year.

“I think a year of playing college lacrosse is going to be really good for me and it’ll be fun to be around the whole team together,” he said.

None of the team’s seven top goal scorers are graduating this spring, with Hess being the main loss from a production standpoint, so the Leopards will go into next season with high hopes for a talented rising sophomore class including Lehman.