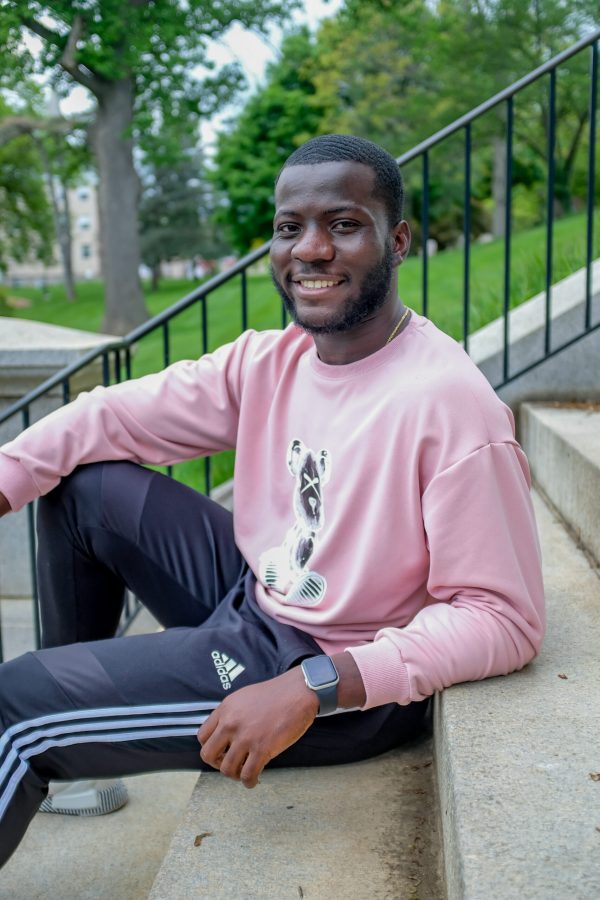 Balogun will be working his "dream job" at Goldman Sachs after graduation. (Photo by Caroline Burns '22)

Basit Balogun ’21 keeps odd hours. It’s not uncommon to find him working on a project at 4 a.m. or taking calls long before the sun rises. His phone is constantly buzzing. When he walks on campus, he rarely makes it more than a few feet before stopping to chat with someone.

None of this is wasted time. Balogun’s deep connections on campus aren’t just social; they are rooted in a deep attentiveness and commitment to his community. His personal story is one of hardship and determination, but he has spent much of his time “lightening the load some have to unduly carry”—making it easier for others to follow his path to success.

And as this year’s Pepper Prize winner, Balogun represents a Lafayette ideal centered on giving and community.

“Basit is one of the most giving people I have ever met,” said Professor Rosie Bukics, Balogun’s Posse mentor. “He gives himself, all the time. He is there for whoever needs him, or whatever needs to be done.”

Balogun came to Lafayette after living in the United States for only two years, having moved from Nigeria halfway through high school. He started out in the computer science department, but his freshman year was violently interrupted when he collapsed on a basketball court with a heart attack. He underwent open heart surgery and was confined to a hospital bed for months.

Bukics recalled visiting Balogun in the hospital after his surgery. Even in that moment, she said, he wasn’t thinking about himself.

“He spent the entire time not talking about himself and what he had been through, but what was going on on campus, what was he missing,” she said.

Balogun lost the entire spring semester to the heart attack, which put him at a significant disadvantage compared to his classmates. He was forced to overload but still managed to maintain high academic standing, earning dean’s list in half the ensuing semesters.

But Balogun was never focused on his own hardships. After his freshman year, he quickly began building a network of support for the people around him, focusing particularly on the hidden disadvantages often overlooked at an institutional level.

“There are so many people that are disadvantaged in so many ways that the world doesn’t recognize, and it slowly builds up,” he said. “Any system that exists, it disadvantages someone, somewhere.”

He gave an example: many students coming from lower income high schools have less rigorous curricula, which sets them back from their peers even in intro level courses and makes it more difficult to navigate careers.

Balogun’s resume is a laundry list of volunteer tutoring and mentoring programs, all of which help address this problem. He has worked in high schools, both his own alma mater and around Easton through programs like the You Can Too mentorship program. He has led workshops on coding and financial literacy, and worked as a career ambassador for the Gateway Center. And he has worked as a career ambassador for Seize Every Opportunity (SEO), an organization that connects Black, Latinx and Native American college students with summer internships.

“There are very few African Americans, there are very few Latinos in [computer science] and so students from those backgrounds who come in feel like they’re strangers,” Liew said. “Basit is a shining example, and through his willingness to help [these students], to talk to them, they can share their experiences and he can help them deal with [their challenges] and overcome them to the best of their abilities.”

“That’s a really great impact on the department, and on the field in general,” he added. “We need more examples like him.”

Balogun got involved in other ways, too, often pushed by his close friend Saeed Malami ’20. He and Balogun went to rival high schools in Nigeria, though they didn’t know each other at the time. Malami was the first person Balogun told when he learned about winning the Pepper Prize.

“To this day, his growth has been not simply marked by going through the years and facing challenges,” Malami said of Balogun. “[It’s been] this deliberate, and I tell you very deliberate, constant examination and re-examination of himself and his ideals and his values.”

Despite all his institutional work, many of Balogun’s main contributions have been behind the scenes. He spends hours every week tutoring students in math and computer science, especially the notoriously difficult CS150. This semester, he’s spent 13 hours nearly every weekend helping students get through the course. And in Posse, too, Bukics said he is “the glue that held the Posse together.”

“I saw people that I care dearly about struggling, I just felt like I needed to help them,” Balogun said.

Operating like this on an interpersonal level plays into a broader Balogun philosophy: working within a system can only take you so far.

“I don’t think it’s fair to expect someone who’s disadvantaged by the system to follow the system in the same way as someone who is benefiting from the system,” he continued, adding that this was true so long as they behave “ethically.”

He gave another example: to be a Teaching Assistant (TA), most courses require a certain level of performance in the class and demonstration of content knowledge. One thing that is also required but rarely mentioned, however, is being able to legally work.

Balogun was undocumented for the majority of his college career, which prevented him from getting a paid job as a TA. But he did it anyway, as a volunteer. And his experience as an undocumented student also led to one of his most singularly significant contributions to campus: Undocufund, an organization that provides scholarship money to undocumented students.

The group was formed in 2020 by Balogun and student government president-elect Flor Caceres ’22. In their first fundraiser, they raised almost $10,000. Additionally, Balogun has helped secure admission for three undocumented students in the last two months.

“Being undocumented is not just about the label, it comes with so many things,” Balogun explained. “It comes with being very poor and not being able to generate capital for yourself. I spent my first two years just worrying about money, like 90% of the time.”

Though he noted that Lafayette provides good support for undocumented students, he said “it takes someone who has worn those shoes to really understand.” Undocufund provides no-strings-attached funds for their recipients, to help reduce the financial strain of daily life that these students experience. More than that, however, the fund is a way of raising awareness of undocumented students on campus.

“It’s a way of showing…there’s a group of students on campus that we need to take care of,” Balogun said.

Coming out of college, Balogun has a “dream job” at Goldman Sachs working as a Systems Engineer. Long-term, he said he has a passion for entrepreneurship and developing deeper, technological solutions to the problems he confronted as a college student. But overall, he said, he’s not quite sure where he’ll end up.

“I think life just takes me places,” he said.