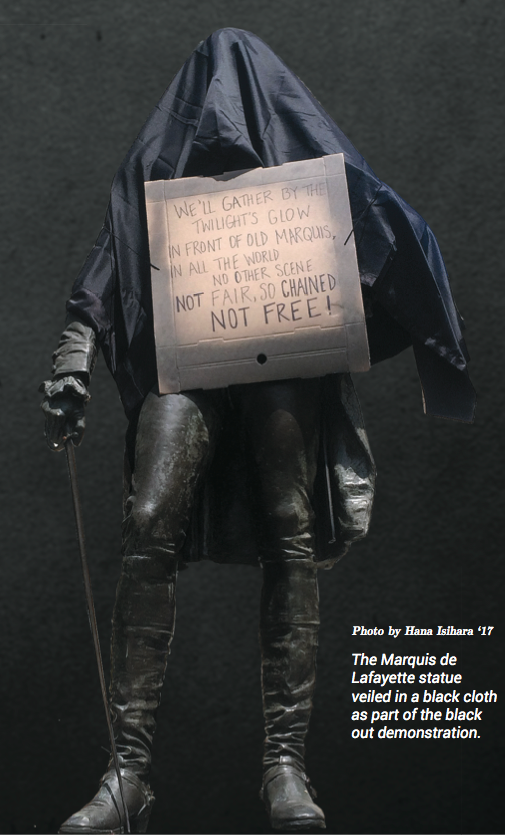 By Melissa Last
Students make statement against police brutality with campus campaign
Students woke up on Monday to pathways covered with chalk outlines of bodies and sayings like “Black lives matter.” Statues were shrouded and black flags were placed around campus.

The mute display was explained in an email sent to the entire student body and signed by members of several campus organizations. The demonstration, the email said, was a “black out” to “highlight the protests in Baltimore which stem from our nation’s history of poor race relations.”

“We implore you to continue the discussion surrounding systemic racism in and outside of the classroom…” the email read. “This is a human and social problem that transcends race and class and can only be solved when we, as a community, come together to actively address it.”

The message concluded by asking students to reach out to the Office of Intercultural Development, the Association of Black Collegians, Kaleidoscope or NIA: Women of Purpose and consider the state of race relations both on campus and across the country.

The demonstration did have an impact, although perhaps not what the organizers intended. It spawned a rash of postings and Yik Yaks ranging from supportive to dismayed to offensive.

According to Campus Liaison to the Association of Black Collegians Ariell Christian, the “black out” was in response to what many students felt was a lack of attention paid on campus to issues such as Ferguson and, more recently, the events in Baltimore.

Christian acknowledged that President Alison Byerly had addressed the issue in a recent email, but “we felt like that wasn’t essentially enough…there needed to be more action on this campus.”

This “we” referenced by Christian includes more than just members of ABC, but a collection of students from all over campus who came together to execute the “black out” Monday morning from 3:30-6:00 a.m., she said. The demonstration was four-part: the veiling of the statues, chalk outlines and messages written on paths, black flags and the announcement email.

The reaction to this demonstration was mixed on and off campus. Some students said the action felt polarizing and as if it pitted black students against the rest of campus. Others found the protest to be accusatory. Many said they were confused about how to respond to the demonstration, with one noting: “All of these events just make us feel less connected with our African American friends.”

Online the response was more hostile. A post by the Lafayette College Facebook page about the demonstration received a myriad of enraged comments from alumni, students and others. Some posters found the black out “disturbing” or disrespectful as it occurred on the day that one of the NYPD officers shot last month died of his wounds.

One online poster, Maureen Liccione, writes, “I am very very disturbed by this. On the day a member of the NYPD not much older than the students was assassinated? What respect was shown for the daughters and sons of PO’s who attend Lafayette?”

“Clearly all lives matter, but not all lives are being treated like they matter,” Christian said. “The Black Lives Matter movement is not meant to prioritize some lives over others, but rather recognize that black lives are often treated as though they do not matter as much as others when this should not be the case.”