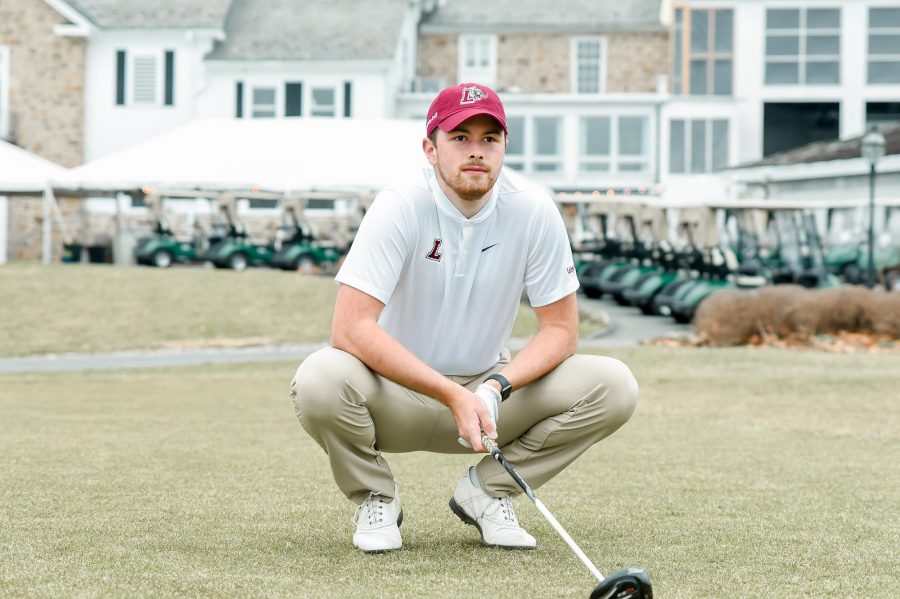 Cronin tied for third place at the conference championship in May. (Photo courtesy of Athletic Communications)

After an outstanding four-year career at Lafayette, senior golfer Brendan Cronin was named the Patriot League Scholar-Athlete of the Year last week, the first Lafayette golfer to win the prestigious award.

Cronin was also named to the All-League First Team after leading the Leopards through an unprecedented spring season, his first such award.

“It boils down to a lot of hard work both on the course and off the course,” Cronin said. “It is a great way for me to go out as a senior and reflects the fact that I focused a lot on golf, but also focused a lot in the classroom.”

The Sutton, Mass., native has been on the golf team for four years at Lafayette and has posted a number of standout individual performances. Cronin is no stranger to academic accolades either, having earned spots on the Patriot League Academic Honor Roll every year.

“It is a pretty cliche answer but it boils down to time management,” Cronin explained. “I have had a pretty busy schedule at Lafayette for the past four years so I had to take advantage of early mornings and late afternoons when there is not much going on. I’ve had the opportunity to work with a number of groups on campus to help me with my time management…using groups such as Athlete Peer Mentor.”

The Scholar-Athlete of the Year honor is given to someone who excels both in the classroom and at their respective sport. An athlete must have at least a 3.20 cumulative GPA and be a starter or key player in their sport to be considered.

Given his credentials, Cronin was an obvious choice: his Lafayette résumé is about as stacked as they come, with a 3.69 cumulative GPA as a civil engineer and a third-place finish in the Patriot League Championship a few weeks ago.

“I’ve grown a lot as both a student and athlete in my four years at Lafayette,” Cronin stated.

Cronin specifically pointed to the engineering major’s structure as one of his keys to academic success.

“Lafayette has an excellent engineering department,” he said. “The professors build off classes well so I’ve had the ability to grow as a student.”

“I took a lot of basic courses my first year and then sophomore and junior year I was in the thick of classes pertaining to my major,” Cronin added. “Fortunately, my senior year I was able to dive more into what I’m interested in. I think how the major was laid out allowed me as a student to be the best I can be.”

Cronin led the Leopards this year on the golf course, helping the team finish in the top five at three tournaments this year and place third in the conference championship round, the team’s fifth top-three finish in the event since 2010. Cronin shot an 11-over-par 221 at the Patriot League Championship, tying senior Cole Berger and junior Kazuki Osawa for third.

“I do not think my golf game is at its peak but I think it’s progressed enough where I know I am going out on top,” Cronin said. “And that’s great peace of mind, knowing I gave it my all, grinded with my teammates in practice and at tournaments, and enjoyed my four years. I’m satisfied leaving Lafayette and I know I’ll be happy walking across the stage in a couple of weeks.”

As one of the team’s veteran players, Cronin has witnessed firsthand how the Lafayette golf program has grown and improved over the past few years.

“The team my freshmen year was not the best, but the three other golfers in my class knew there was more we could get out of the program,” he said. “Fortunately we added a number of great freshmen my sophomore year, and the team just took off.”

Last spring’s regular season schedule was a wash due to the pandemic, but the team placed second in the conference championship in 2019.

“Golf is all about confidence and I think since my sophomore year we’ve been the most confident team in the Patriot League,” Cronin said. “Last year we had a tough break as that was really the year we thought we could win it all, but my four years at Lafayette have been an amazing experience and I’ve met amazing people.”

Cronin’s accomplishments go well beyond the classroom and golf course, as he has been the Chair of Sustainability for the Lafayette College Student Government for the last two years and an Athlete Peer Mentor for the last three years. He has also served as a scholarship chair for Phi Kappa Psi fraternity, been a member of Lafayette’s AISC National Steel Bridge Team and volunteered for Boys and Girls of America.

Despite his breadth of involvement, Cronin still somehow finds time for fun.

“Anyone who has an eye on this award should focus on balance,” Cronin said. “Be sure to work hard, but also to enjoy the other parts of school. It’s just as important to enjoy spending time with friends. Time management is crucial so you can spend the appropriate amount of time on schoolwork, yet you also have the opportunity to socialize, interact with people, and enjoy downtime.”

While Cronin understands the importance of focusing on schoolwork and golf, he does not diminish the role that friends and extracurriculars have played in his time at Lafayette.

“Balance is important because when you look back at the four years, I will certainly remember this award but I will also remember the times I spent with friends,” he said. “It’s easy to get bogged down with the academics and aiming for a 4.0 GPA, and while that is important, the social interactions a person has and the social connections you make are equally as important.”