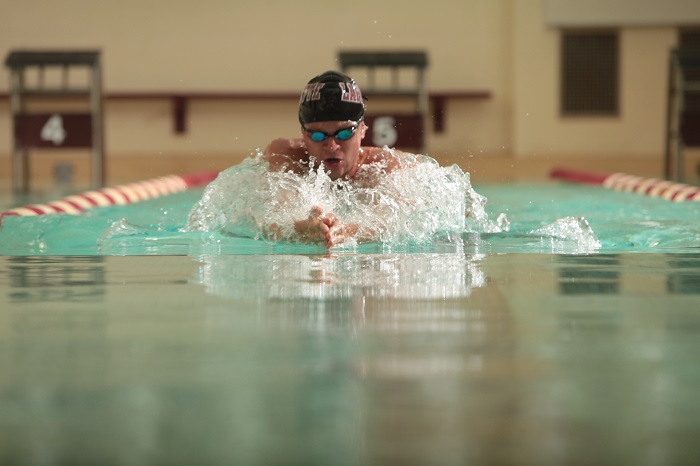 Greg Grewal ‘16 practices the breaststroke in preparation for the swim season and a chance at The Olympics. [Photo Courtesy of Athletic Communications]

The chemical engineering major and captain of the swim team qualified for the 2016 Olympic trials after posting a 1:03.17 time in the 100M breaststroke at the USA Swimming’s Futures Championships on Aug. 2. The qualifying standard time of the event is 1:03.69.

A holder of multiple records at Lafayette including the 100M and 200M breaststroke, Grewal is arguably one of the best swimmers in the history of the program. Head Coach Jim Dailey, who has spent the last 20 years leading the swim team, fully agrees with this sentiment.

“[Grewal] is definitely in the top one percent of swimmers that I’ve coached,” Dailey said. “In 1992, when I first started coaching here, we had Andrew Rutherfurd go on to compete in the Olympic Games in Barcelona. [Grewal] has broken most of his records so it says a lot about him.”

Dailey never quite envisioned this amount of success for Grewal when he came out of high school.

“Greg came here for the academic profile of the school,” Dailey said. “He was a decent swimmer coming out of high school but I never thought he would be this good.”

The last Leopard to qualify for Olympic trials was Rutherfurd, making Grewal’s achievement even that much better.

“I would say this is my greatest achievement,” Grewal said. “It’s been a goal ever since I was little. Looking at people competing in the Olympics and thinking ‘I wish I could do that someday.’ It’s something special.”

Grewal will have about 10 months to train for the trials, which start next July in Omaha, Neb. Although he is going to train to best of his ability, Grewal still doesn’t think it will be good enough.

Actually getting to the Olympics is going to be tough for Grewal, as only the top two swimmers in his race will get selected. Both Grewal and Dailey have realistic and similar goals going into the trials. Their primary goal is to make it to semi-finals which would place Grewal in the top 16 of his event.

“I would love to make top 16,” Grewal said. “It’s a long shot goal but it’s also something to shoot for.”

In attempting to reach this goal, Grewal is going to have to juggle training, swim season and schoolwork. After recently being named to the Patriot League Honor Roll, Grewal has proven that he can successfully balance schoolwork and athletics.

“His work ethic in the pool is the same as it is in the classroom,” Dailey said. “He has high expectations of himself and sets realistic goals that he works hard on to achieve. Greg hasn’t been elected captain by his teammates just because he’s a fast swimmer.”

Grewal will continue training for the Patriot League championships and Olympic trials. Regardless of how he performs at either event Grewal will have left a mark on the Lafayette program.

“When you come to college it’s your last four years of swimming and as a coach you’re not looking to just get swimmers to achieve their best times but rather to fulfill their potential,” Dailey said. “Sometimes it takes a special kid to do that and I think [Greg] is one of them.”