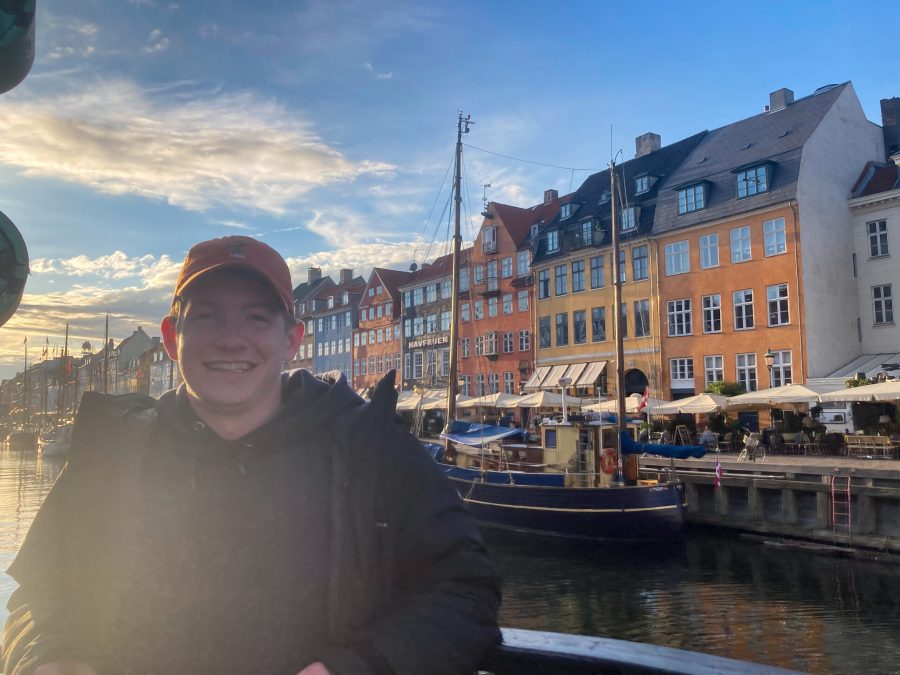 Henry Hipp '22 is taking a course entitled “Terrorism and Counter-Terrorism from a European Perspective" through DIS Copenhagen. (Courtesy of Hipp)

Few Americans get to see Copenhagen, Denmark when it is free of tourists. Henry Hipp ’22 and Kara-Lyn Moran ’22 have found this to be an unexpected perk of studying abroad during the pandemic.

“[Denmark] just opened the borders up to Americans and I, with my other classmates, we are the only Americans in Denmark, let alone tourists at all. So that’s pretty interesting,” Hipp said. “We can see Denmark in its purest form.”

“The city is not full of tourists, so it does feel like we’re living like locals, which I think is something that is fortunate for me. I don’t think that’ll happen for any other study abroad students,” Moran explained.

Hipp and Moran are currently studying abroad in Copenhagen through DIS, a program specializing in study abroad in Scandinavia. Through DIS, students take one core course that usually allows them to travel throughout Europe. However, due to the pandemic, Hipp, Moran and other students in their program have not had the ability to leave Copenhagen.

“I feel kind of cheated because we were supposed to go on all these amazing field studies. For example, my core course—Counter-Terrorism—we were supposed to go to Dublin in Northern Ireland, and then Oslo in Norway. Those are two focus areas that we’ve talked about for quite some time this semester. So it’d be nice to go there,” Hipp said.

Moran had a similar experience with her core course.

“Most of the semester was literally just a waiting game, sitting on Zoom and figuring out what to do,” she said.

Still, both Hipp and Moran are grateful to even have the opportunity to study abroad during such a tumultuous time.

“I had to manage my expectations to be like, I know that I’m going abroad, but it’s not going to be the abroad semester that somebody had two years ago, five years ago, because that’s just not the expectations that I had… And so I said I’ll take the chance,” Moran said. “If I get to go abroad at all, that would be wonderful.”

For the majority of the semester, Hipp and Moran have been attending their study abroad classes from home through Zoom. However, when Denmark’s borders opened to study abroad students in mid-April, they finally had the opportunity to travel to Copenhagen.

“I did lose faith at times. They kept being delayed, our travel plans. So that definitely hurt my hopes. But I’m glad I stuck with it. And I think I totally made up for the lost time at least, learning on Zoom. Even the few weeks that I’ve been here makes all the difference,” Hipp said of physically visiting Copenhagen.

Moran credited Lafayette’s Study Abroad Office for being an invaluable resource during her experience.

“There weren’t very many study abroad students, so the Study Abroad Office at Lafayette was extremely helpful and very timely in communications… The office does a really good job of making sure that students feel like they have resources, so I’m very thankful for that,” Moran explained.

Ultimately, both said they are thankful that they had the chance to travel to Copenhagen after months of remote learning.

“It’s a super invaluable experience… Being able to interact and hear these different perspectives is something that really is priceless. That’s really special,” Hipp said. “I’m grateful for that.”