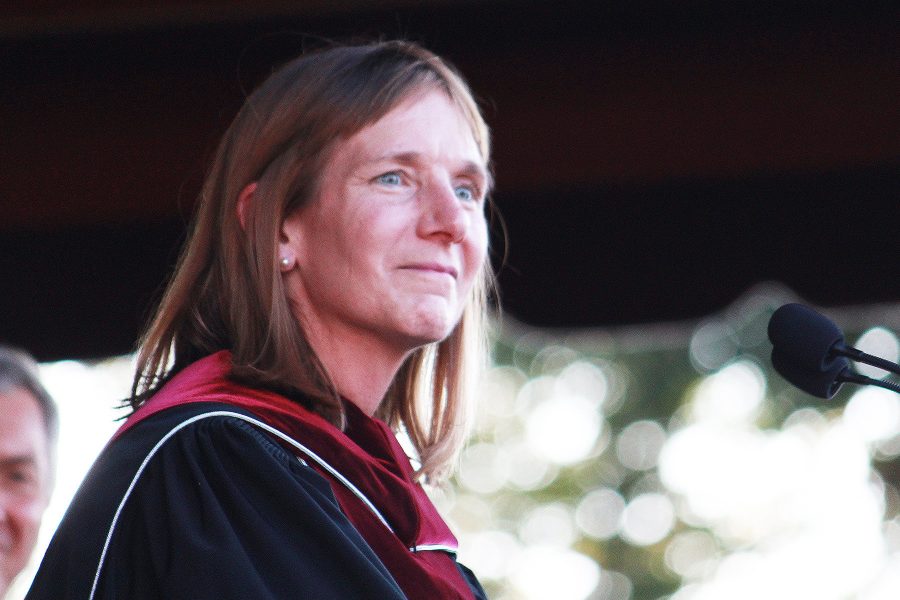 In her own words, President Alison Byerly has the “equivalent of two bachelor’s degrees”—eight years at the college has meant seeing two entirely different student bodies rotate through. As president, Byerly led the largest-ever capital campaign, oversaw the largest-ever capital project and saw the college’s endowment crest $1 billion. She also spearheaded initiatives to grow financial aid and increase the affordability of Lafayette. And now, she will be officially stepping down on June 30, ceding the position to her replacement Nicole Hurd.

Earlier in the year, Byerly announced her intentions to go on sabbatical after leaving the college, as she did in 2011 when she finished her book “Are We There Yet?: Virtual Travel and Victorian Realism.” But she surprised many at the college when she announced that she would instead be assuming the presidency at Carleton College in Minnesota, a liberal arts school similar in size to Lafayette.

Prior to becoming Lafayette’s president, Byerly spent much of her time in academia, first as a professor then as provost and finally executive vice president at Middlebury College in Vermont. During that time, she was a visiting scholar at MIT, Stanford and Oxford. She first joined Lafayette in 2013, succeeding Dan Weiss as the college’s 17th president.

In addition to the thousands of students who came and went during her tenure, Byerly also saw through some more permanent additions to the college, like the $75 million Rockwell Integrated Science Center (RISC), which opened August 2019 and was the college’s largest-ever capital project, and the new McCartney Street dormitories, which opened in the fall.

“The very first day that Rockwell was open, I can still picture opening the doors and walking in and seeing it filled with students,” she said. “Students were already sitting outside the cafe, they were already going out of the classrooms, and I just felt so so enormously proud.”

Byerly also played a significant role in the “Live Connected, Lead Change” capital campaign which raised over $400 million from 2014 to 2018. Over $86 million of that sum was earmarked for financial aid.

Affordability was a big theme for Byerly’s presidency. In 2016, she helped launch the Affordability and Distinction through Growth strategic initiative, with the goal of increasing the student body over ten years to grow the financial aid budget. Following the pandemic and with a new president about to assume the role, the future of the initiative is unclear, but Byerly said she hopes it can live on in some form.

Preparing and presenting the initial plan, she said, was one of her proudest achievements at the college.

“I have seen so clearly over time, caring for many students from many different walks of life, that that journey [to college] is a lot more complicated for some,” she said. “There are students who would really benefit from the opportunity for a Laf education. But…I think all students benefit from knowing a wider range of students around them.

“I do think it’s the right thing [increasing Lafayette’s affordability]…that we offer students that opportunity to be a part of an environment that is a genuine cross section of America and not limited simply to a particular stratum of students.”

She added that it is not sufficient to just admit more students, but to support them after arriving on campus, especially lower-income and first-generation students. The pandemic in particular she said helped lay bare a lot of potential inequities in the student experience. Before and during this time, her administration worked to build resources for these students on campus, like increasing financial aid for winter interim courses. She said there is “absolutely more work to be done,” however.

Byerly was a very visible president. She taught guest lectures and even taught a course one year, and regularly attended plays, musical performances, readings and other events. From her bird’s eye view as president, she witnessed class after class work their way through the college. She said each had their own particular flavor, but there has been a growing continuity between the classes during her time here.

“It’s amazing how some classes have particularly strong leadership in certain areas, and how this has an effect on the rest of the class. It’s amazing how quickly student cultures change,” she said. “There’s a culture that’s specific to a place, but there’s a sense in which [students] are connected to larger movements with other students.

“Many things seem less Lafayette-specific than they used to be, and I don’t mean that at all in a bad way,” she continued. “A lot of the language, discourse, concerns reflect good thinking that’s happening elsewhere, too. There’s a kind of opening up as a culture among students, of looking beyond our own campuses.”

She noted a higher level of political engagement and activism among students than in previous years, which she said was not necessarily specific to Lafayette. She also said she’s seen students make more intentional efforts to preserve groups across classes through leadership training.

Lafayette has also gotten more diverse under Byerly, both in the student body and the faculty. Byerly herself was the first woman president of the college, and will be the first woman president at Carleton as well. Since she first assumed office, women leaders in higher education have become much more common, but she said that at the time she was aware of the symbolic importance of her appointment, especially at a college that only went co-ed in 1970.

“I was very touched by the fact that many women did say they found [my appointment] significant,” Byerly said. “I wanted to make people proud of me as their first female president.”

Though she likely won’t go back to teaching any time soon, Byerly said her job as president has allowed her to participate in the education process in a new way—one which she enjoys immensely.

“In an odd way, what I remember most fondly is not just the highlight moments, but things like walking around Rockwell and feeling like, ‘gosh, I helped make this happen,’” she said. “I feel very proud and honored to have been in a position to help make [the Lafayette] education possible.”