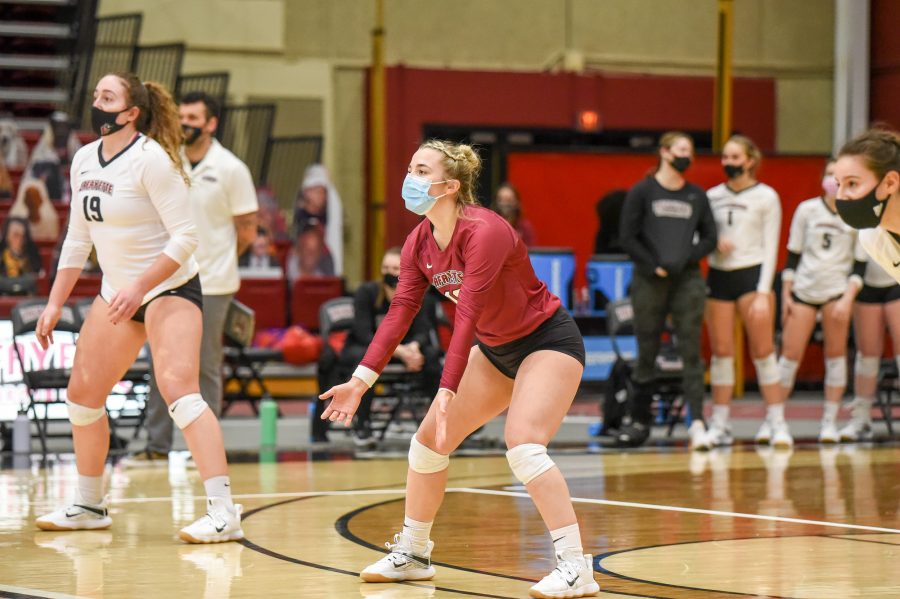 With women’s volleyball’s first game being postponed due to extreme weather, the team played four matches in just five days in the opening week of the season, winning two and losing two.

“The UConn Challenge was our first game of the season since our home opener against Iona was cancelled,” senior outside hitter Leanna Deegan said. “We were all so excited to have our first home opener and there was even a student athlete tailgate organized for before our game. At first we were hopeful that the power would be restored, but once we realized the game would probably not happen we joined the tailgate in the dark.”

“The week before, we focused on different gameplay scenarios score-wise and different competitive drills,” Deegan said. “Going in, we knew the teams would be a challenge but were excited to see our progress from preseason and get a little preview on how competitive we can be this year.”

Late into the second set, the Leopards went on a 3-0 run to tie the match at 24, but the Huskies gained enough momentum to take the set.

Deegan led the way for the Leopards with nine kills and six digs. Junior outside hitter Ellie Carrera-Justiz put down eight kills and 11 digs. Sophomore setter Alyssa Vitale opened the season with 27 assists and five digs.

The first step in the UConn challenge ended in a 3-0 loss for the Leopards.

In the first match of the day on Saturday, the Leopards took one out of four sets against Rutgers.

“Being able to take a set off of a Big 10 team like Rutgers was really cool and made me excited for the season, especially for Patriot League play,” Deegan said.

Deegan paced all attackers again in the second match of the day against Central Connecticut with 28 kills, leading the Leopards to their first victory of the 2021 season (3-2).

The Maroon and White started to fall behind after the third set but closed out strong in the fourth with a 4-0 run.

Deegan collected 14 more digs on the day and a second straight double-double. Carrera-Justiz was also in double figures with 10 kills. Sophomore Katie Weston hit a career-high of 28 digs in the win.

“Katie Weston played really well and got a lot of digs,” Deegan said. “She makes the hard plays look easy. She’s great to play next to and is super calm and collected.”

Deegan hit .457 and added 24 kills and five digs. This was Deegan’s third straight match with over 20 kills.

Lafayette started off fast with a 7-0 run to take the first set.

“Alyssa Vitale got the sets out and gave opportunities to the hitters even when the passes are being shot directly at her,” Deegan said.

NJIT pushed back in the second set, but the Leopards battled to tie.

“Something we have been trying to work on is having a consistent energy and court presence rather than playing really good one set and then letting up the next,” Deegan said.

Deegan had four kills to open the last set, leading the Maroon and White to a victory, closing out a long week of volleyball.

“It’s definitely tough to manage time while in season, especially during weekday games,” Deegan said. “But once we start to get into more of a routine and schedule with school starting I expect it will be much better,”

“For this tournament, we have been focusing on fixing our own mistakes and sharpening our own skills,” she added. “Now that we had our first couple games, we identified what needs to be worked on and have been doing that in practice.”

Lafayette will be traveling to Sacred Heart this weekend for another invitational, starting on Friday, Sep. 10 at 7 p.m.