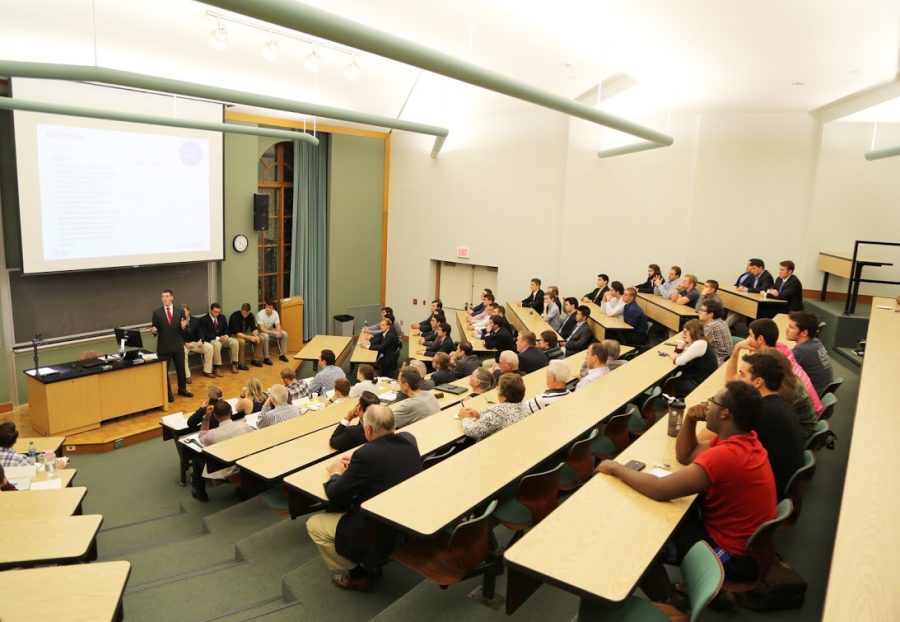 The first of two presentations by interested fraternities, as part of the college’s new Greek

over an hour and 15 minutes, including the question and answer part.

The committee consists of faculty, administrators and students both affiliated and non-affiliated

with Greek Life, and will submit a recommendation to Vice President of Campus Life Annette

Delta Tau Delta, the other interest group formed at the college, will present on Monday. The

“colony”—the next step in the application process to be recognized by the college—or none.

During the first part of the night, the group spoke about their commitment to being “true

gentlemen” and the values of their organization, along with their goals to be recognized by the

college, to return to their house, Vallamont, to contribute to the Lafayette community and do

community service, as well as to carry out their unique three-day member education program.

program, for clarity on what it means to be a “true gentleman,” and the group’s commitment to

After the questions, the committee went into a closed-door meeting.

“We discussed our impressions and reactions to the presentation itself,” said Associate Director

of Residence Life and Advisor to Fraternities and Sororities Dan Ayala, a member of the

committee. “So, highlights of things that we heard that were of interest, positive points, things

that were of concern, things that the organization can improve upon.”

presentation. The closed-door session lasted for over an hour, he said.

He read a section of Chi Phi application to the committee on diversity, “While Chi Phi’s

eligibility standards seek to attract the best and the brightest students, the standards will

seek in the realm of diversity.”

McKnight then asked, “I’m just wondering why you think of those as being at odds…the idea of

In an interview, President of Chi Phi Rho Chapter and one of the leaders in the presentation

Michael Altman said Chi Phi’s members are diverse in their interests, backgrounds and the

different places they come from. He listed members that come from single-parent households

and two-parent households, socioeconomic diversity, the range of places across the country their

members come from and different interests from art to football.

that when deciding who can join the fraternity they look for “the character of the individual.”

dialogue with me about how to see diversity as a benefit,” McKnight said in an interview.

answer to his question, but did say he felt like they did a good job in talking about different

forms of diversity in the presentation other than the “Big Eight” (ability, age, ethnicity, gender,

race, religion, sexual orientation and socio-economic status), like having a mix between athletes

and non-athletes in the group.

McKnight could not comment on the closed discussions of the committee.

According to Ayala, one of the main things that the committee is looking for in a national

organization that wishes to colonize on campus is that their policies on diversity, inclusion and

non-discrimination are in line with the college’s policies.

receive recognition as a colony by the college.

The contract with the college to use the house is up by the end of this semester. If Chi Phi does

not pass to the next step of the process next Friday, Blakeslee said the organization still plans to

work out another arrangement with the college to use Vallamont.

President of the DTD interest group Dan Lupia ‘16 (Full disclosure: Lupia is our copyeditor, but

Lupia said that he does not feel there is animosity between the Chi Phi and DTD interest groups,

although only one of them, if any, will be allowed, can move forward in the Greek life

reapplication process at this time.