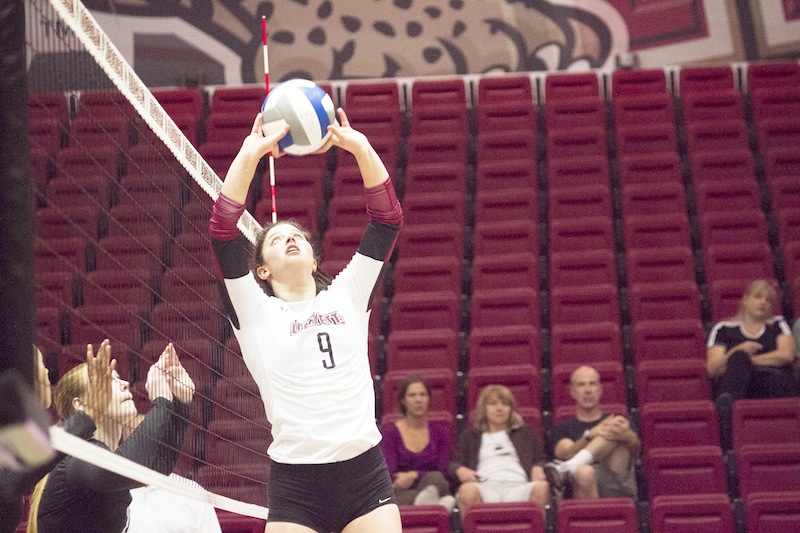 This week The Lafayette takes a timeout with freshman setter Maria Balus who has been selected as Patriot League Rookie of the Week three of the last four weeks.

You’ve had three rookie of weeks in four weeks, what is your reaction?

Definitely really cool to experience that. I actually never really found out until one of my

teammates mentioned it, and I thought that was really cute. They’re like, “Can we all just say

congrats to Maria, for getting Rookie of the Week, again.” Oh my god, it’s really cute, kind of

also embarrassing, but really sweet of everyone.

The first part of season has obviously been good for you, how has the transition to

It really helped that we had full preseason to kind of start us off. My team has been really, really

helpful in making sure my transition is a lot easier than it would normally be without them.

It seemed like last year the setter position had a question mark for the team, what’s it like

filling that role for Lafayette as a freshman?

That one was a pressure situation, but obviously something that I had a lot of support coming

into it. Definitely hard to immediately step into that role, but I definitely had a lot of help to help

The team recently swept Lehigh. That’s your first experience with the rivalry, what was that win like for you?

It felt so amazing. The last point of the third set was probably one of the greatest feelings I’ve

the court like we had won a national championship and we were just so excited to beat Lehigh.

We kind of expected it too, but at the same time it was still just a great excitement to finish that

Volleyball is having a great season so far at 10-4, especially compared to last year. How does that feel for the team?

It’s a great feeling for the team. We have this whole “new team” thing that we’ve tried to

incorporate in our talks together. We do a good job of supporting each other and instead of

crumbling we know how to pick ourselves back up, which I think is a really amazing trait to have

What is your biggest challenge for the rest of the season? What team are you most worried about?

Our biggest challenge would definitely be American at this point. They’re definitely a very good

team. We were with them in sets two and three, and I think that we were really close. I think that

and keep our level of play higher.

Did you play any other sports growing up?

When I started high school it was either going to be basketball or volleyball, and I was trying to

think about which one I’d want to focus on, so I could progress further in one of them. My

brother got me started in volleyball and we both continued it throughout high school. I get this

weird, extra kind of adrenaline rush when I win in volleyball, so I really like that feeling, and that

helped determine which sport I wanted to play.

really big role of the team, like a quarterback in football. I liked being the go-to person in a tight

situation or if we need a leadership role to pull us out. It may not get as much credit as hitters

do, but it’s a really good feeling set up someone else’s success.

In high school we would have buddy bag system. They were my favorite things. They would

from. It was the cutest thing because at the end of the game we would try to guess who it was

from. It was such a fun time being secretive and getting gifts from people.

You moved here from California. What’s been the biggest transition living at Lafayette?

The transition was pretty easy because of how the team helped me fit into my role at Lafayette.

still have to go buy my winter clothes.

I’d rather play the sport than watch it. The sport that I watch the most would probably be

basketball. My family is big on the Lakers, but they went downhill.

I like the saying, “This too shall pass.” I think it’s very applicable to any situation, because if you

all of the moments that you have.