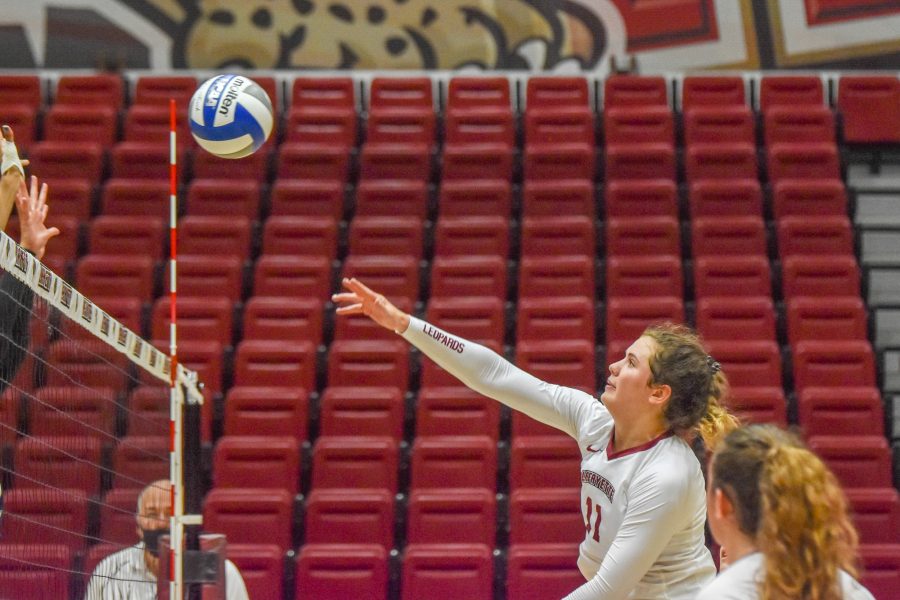 The Lafayette volleyball team made a quick comeback on Tuesday against St. Francis, after failing to capture a win in the three-game Sacred Heart Invitational over the weekend.

Senior outside hitter Leanna Deegan had a career-best 36 kills, marking the second-most kills in a single match in Division I this season. Deegan also added 14 digs, making her third double-double of the year, and hit .418.

“The team did well staying aggressive and attacking the ball this weekend,” Vitale said. “I think we could be better at communicating on the court and work to minimize our errors.”

Despite the lack of communication, the team managed some impressive accolades on Saturday.

Deegan led the way against both Fairfield and UC Irvine, recording her third-straight outing with over 20 kills total: 23 against Fairfield and 18 against UC Irvine.

Lafayette opened the second day of the invitational strong, winning the first set against the Stags but dropping the next three sets.

Tulevech managed 11 kills and hit .429 in the Fairfield match, with Deegan adding a double-double with 14 digs. Vitale had another 42 assists.

“I think freshman outside hitter Abby Nieporte really stood out this weekend. She definitely stepped up when the team needed her which was awesome,” Vitale said.

Vitale had 31 assists and a pair of services aces, but UC Irvine was able to close out the final two sets to win the match.

“As a team, we’ve been competing every day and working to be a strong offensive team. We also went over our team values and goals as well as watching film on the other team,” Vitale said. “Our coaches really emphasize focusing on ourselves and what we can control.”

The match was a fast start for Lafayette, with the Leopards scoring the first four points of the opening set and taking the first two sets with an easy sweep. The Maroon and White came back to tie the third set after the Terriers made an effort to lead.

“It’s definitely been a challenge trying to stay in a good place both physically and mentally since volleyball and school are both so demanding, but the team is really open with each other so we all pick each other up to stay ready for the next practice or game,” Vitale said.

Deegan led once again with 19 kills and eight digs. Vitale added a double-double that included 48 assists and 10 digs.

“In each game we definitely had great moments,” Vitale said. “We stayed scrappy and worked through adversity in our games, so overall I’d say the hustle of the team was memorable.”

Tulevech closed out the Leopard’s last non-conference match with a game-winning kill. Patriot League play will initiate with Colgate on Saturday at 4 p.m., followed by Holy Cross on Sunday at 2 p.m.