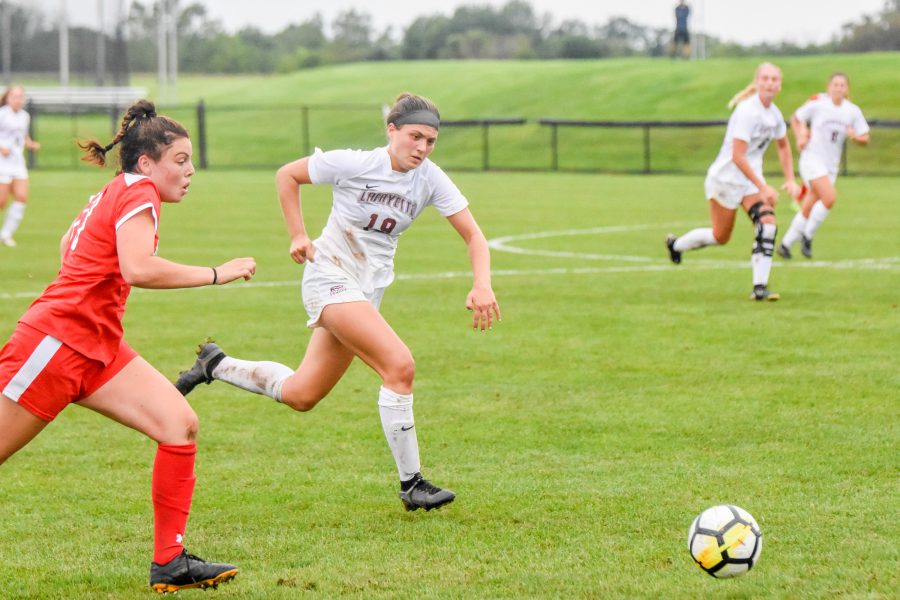 Gretchen Waechter, a freshman defender on the women’s soccer team, was named Patriot League Rookie of the Week after tallying her first career point with an assist during their win against Saint Peter’s on Wednesday and scoring her first collegiate goal during a win over NJIT. The Sea Cliff, N.Y. native started in both contests this week, playing 84 minutes against NJIT and 44 minutes against Saint Peter’s. Waechter is the first women’s soccer player to be selected for one of the conference’s weekly honors this season.

“It was really rewarding. It feels good to be recognized for the work you put in,” Waechter said.

After starting the non-league season with four losses, the women’s soccer team had a positive turnaround this week, adding two consecutive wins.

“In the beginning it was kind of difficult because we have a small squad to begin with, and we suffered from a lot of injuries from a lot of key players, so a lot of underclassmen had to step up and take on the role best we could,” Waechter said. “Our first win was really exciting because as a team we’ve been working so hard and spending so much time together both playing soccer and off the field.”

Waechter expressed that her new teammates have been a great support system during her transition to college play.

“The best part is making relationships and making new friends because although it’s only been two months, I already know I’m going to be friends with these people forever. I trust them so much and I think we have a lot of trust in each other,” Waechter said.

“I have the freshmen, who are my closest friends, but I would say the people that push and motivate me the most are probably the upperclassmen, and specifically a lot of the seniors,” Waechter added, “They’ve been doing this for so long, they have so much experience and I want to respect the work that they’ve put in.”

Waechter was a leader herself back at Friends Academy, where she started for all five years, led the team in scoring for four years, served as a team captain for two years, and led her high school team to two conference championships. To add to her accolades, Waechter was named Most Valuable Player in 2019 and 2020, earned All County Award in 2018 and 2019, earned All Class Award in 2016 and earned All Conference honor in 2017.

She also gave back to her community by taking part in a Student Athlete Leadership Team Training workshop, serving as a Community Service Leader and volunteering as a youth soccer coach.

Despite all of her success in her home town, she still had the dream of being where she is today.

“For the last five or six years of my life, my goal was playing in college,” Waechter said. “I actually did the process a little differently than a lot of other athletes do, in that I looked at schools themselves before I really reached out to coaches.”

Waechter found Lafayette to meet all her needs in addition to sports.

“I remember visiting, campus was so beautiful and I automatically fell in love,” she added. “I had a family friend who loved it, and everyone who knew anything about Lafayette only had positive things to say. From there, I tried to see if I could potentially play here.”

Waechter is looking forward to a bright future at Lafayette, with Saturday’s Patriot League game against Boston University on the horizon.

“We’ve been working on taking what we’ve been practicing and translating that into the game. If we’re able to do that successfully, then I think we’ll be able to progress and be a lot better,” Waechter said. “We’re on a winning streak which is good, and we start our league play on Saturday, so I’m really excited for that.”