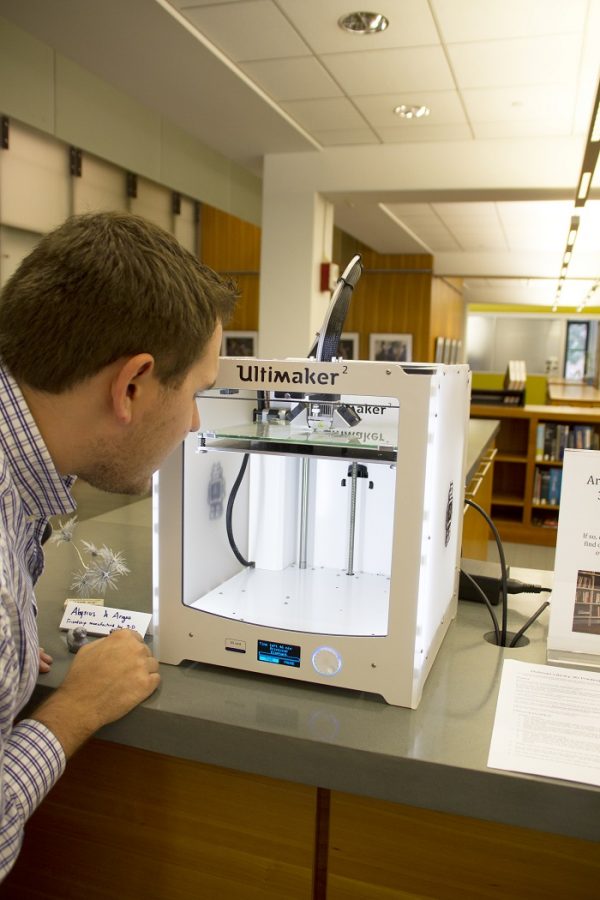 An observer watches the 3-D printer at work. [Photo by Hana Isihara ‘17]

As the college invests more into 3-D printers, Lafayette students are finding opportunities to conduct coursework, research and business.

The Additive Manufacturing Program (AMI), which began in January 2015 as part of the interdisciplinary IDEAL center, explores metal and plastic 3-D printing beyond the classroom and beyond the engineering discipline.

Students in and outside classes have used the 3-D printers to conduct research, create business opportunities, and design their own objects.

Chemical engineering student Samantha Buczek ‘17 was first introduced to Additive Manufacturing in her ES101 course in her first-year. She conducted interdisciplinary research with Ferri over last summer using the plastic and metal printers in Acopian.

“If you have an idea for mechanical engineering students to make car parts or wheels or parts of any machine,” Buczek said, “they have the software available to design a vinyl that can be put into the printer and you can actually…see it on a small scale before doing it on a larger scale.”

McElroy sees the same value in a plastic 3-D printer in the library, and believes that educational programs can arise out of its use there.

“For us the chief interest is in the education and we think we all have discovered that when we take an idea and turn it into something real, an object that you can touch, work with, that you can share with others,” McElroy said. “There’s a lot of a learning that goes on. It takes an idea and converts it into a tangible object. So, that’s the hypothesis that we wanted to test with 3-D printers.”

Ben Ritter ‘17, who also first became involved in 3-D printing through his ES101 course, became a ‘chaperone’ last year that allowed him to work with the printers frequently.

“I think that 3-D printing offers a variety of business opportunities,” Ritter wrote in an email. “The ability to quickly and accurately create prototypes and models of design projects is incredibly useful. Printers are more than valuable tools, also doubling as marketable merchandise themselves.”

Ritter has used the printers to print parts for his mini-car project, guitar capos and some of his design ideas and has seen others printing more complex things like parts of a clock.

The program is funded through a combination of philanthropy, external partnerships and institutional support, according to Ferri, who estimates the total assets amount to $1.5 million. Ritter and Macasevich have both seen that the price of printers has decreased enough to be relatively affordable.

“It’s something that I wish I had when I was in school. But they were just way too expensive at that point. And now that the price has come down,” Mcasevich said, noting that students are taking advantage of the opportunity rapidly. “It’s taken off and seems to be still picking up.”