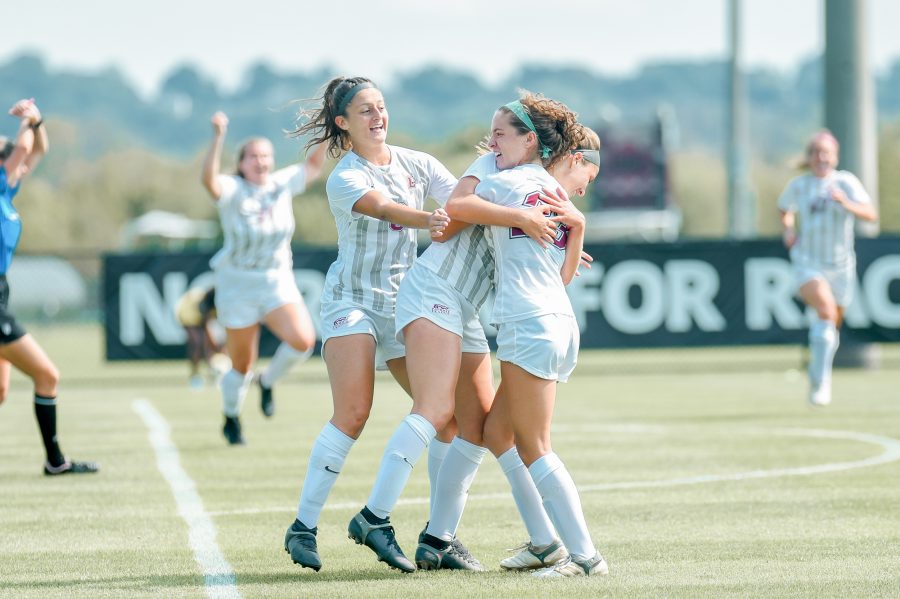 The women’s soccer team wraps up out of conference play with their second win of the season against NJIT. (Photo courtesy of Athletic Communications)

Lafayette women’s soccer team won its second consecutive game in out-of-conference play with a 1-0 victory over New Jersey Institute of Technology (NJIT) on Sunday. The win brings their record to 2-4.

The Leopards had a strong start when freshman defender Gretchen Waechter scored off a volley after a ball was lofted into the area by senior forward Katie Butler.

“It was a great goal,” senior midfielder Sophia Hudson said. “[Senior midfielder Riley Dowd] played a great ball in, and it was an excellent finish on [Waechter’s] behalf.”

Waechter was named Patriot League Rookie of the Week for her effort in the games against NJIT and St. Peter’s on Wednesday, Sept. 8. The goal was the first of Waechter’s career and her nomination for a conference award is the Leopards’ first of the season. Earlier in the week, Waechter notched her first career point on Butler’s goal against St. Peter’s.

The sole goal by the Leopards came six minutes into the contest. The Maroon and White dominated the scorecard notching seven shots, including three on goal, compared to NJIT’s three shots and one on goal.

“We are always happy with a win, especially a solid win,” Hudson said. “Within the last couple of weeks, we have focused a lot of attention on finishing out games when we have a lead.”

The Leopards won two in a row after their previous 0-4 record and will look to capitalize on the momentum heading into their first Patriot League contest against Boston University tomorrow.

“First and foremost our team’s goal is to get everyone healthy and on the field,” Hudson said.

Despite facing multiple injuries early in the season, the team has aspirations of winning when it counts this year.

“Beyond that, we want a spot in the Patriot League tournament and then we want the Championship. We live by the motto ‘no wasted games,’ meaning we take no team or game for granted, and play to the utmost of our ability on any given day. If this is our mindset I see no reason that we shouldn’t accomplish what we set out to do…in fact we have no excuse not to.” Hudson said.

Lafayette will begin Patriot League play this Saturday at an away game against Boston University at 4:00 p.m. The game will be streamed live on ESPN+.