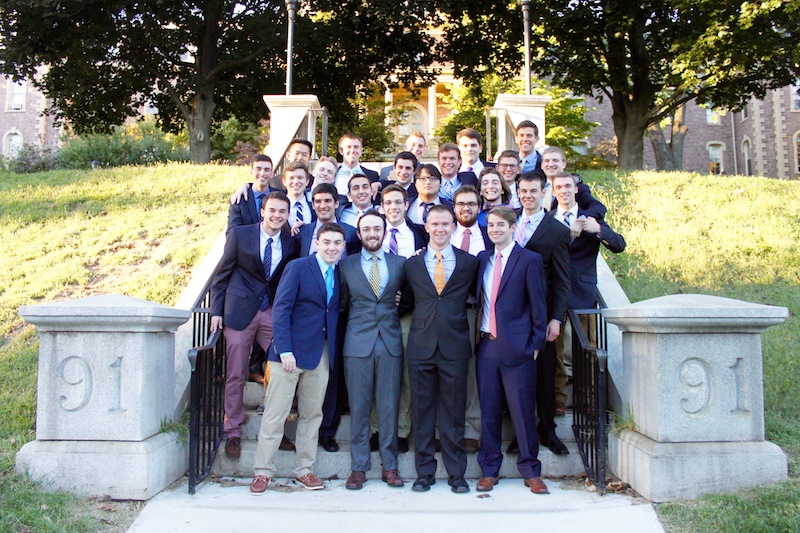 For the first time since 1988, the college will recognize the Delta Tau Delta fraternity.

At about 4:30 p.m. today, both Chi Phi and DTD received the 18-member Recognition Committee’s decision to grant DTD colony status.

The new status will allow DTD to, among other privileges, become an associate member of the Lafayette College Interfraternity Council and use resources available through Lafayette’s Fraternity and Sorority Advising.

This is the first time since the college has brought a fraternity back on campus since Delta Upsilon in 1993.

The organization is expected to submit a full chapter application by September of next year, according to a letter about the decision sent to DTD by Advisor to Fraternities and Sororities Dan Ayala.

President of DTD Dan Lupia ‘16 (Full disclosure: Lupia copyedits for us. He did not copyedit this story) said the 26 members of DTD are excited about the decision. A ceremony to recognize them as a colony will be held at a nearby DTD chapter within about three weeks, according to Lupia.

“We’re just really happy to have finally made a step at Lafayette College moving in the pro-Greek life direction and bringing something back to the school,” he said. They have been organizing and preparing for becoming a colony for about a year and two months.

President of Chi Phi Michael Altman said the members of Chi Phi are disappointed they did not receive the opportunity to become a colony by the college in this part of the process.

The letter Altman received notifying him of the committee’s decision listed reasons such as Chi Phi remaining unclear on the meaning a “true gentleman”—one of the key terms Chi Phi used in describing requirements to join the organization. He added that the letter said he committee was unclear on the value Chi Phi would add to campus, among other reasons.

Altman said Chi Phi provided the organization supplemental materials on what it meant to be a “true gentleman” after their presentation.

Although he said members of his organization are disappointed, he is glad to see another Greek organization is being welcomed back onto campus.

“It’s good to see that the school is moving in a direction to actually change the Greek life culture at this school and we congratulate [the members of DTD] and wish them the best,” Altman said.

Chi Phi can reapply as an interest group next year for colony status. They have been trying to get back on campus for about five years, according to Altman.

Ayala could not be reached for comment before press time.

Ian Morse ’17 contributed to this report.