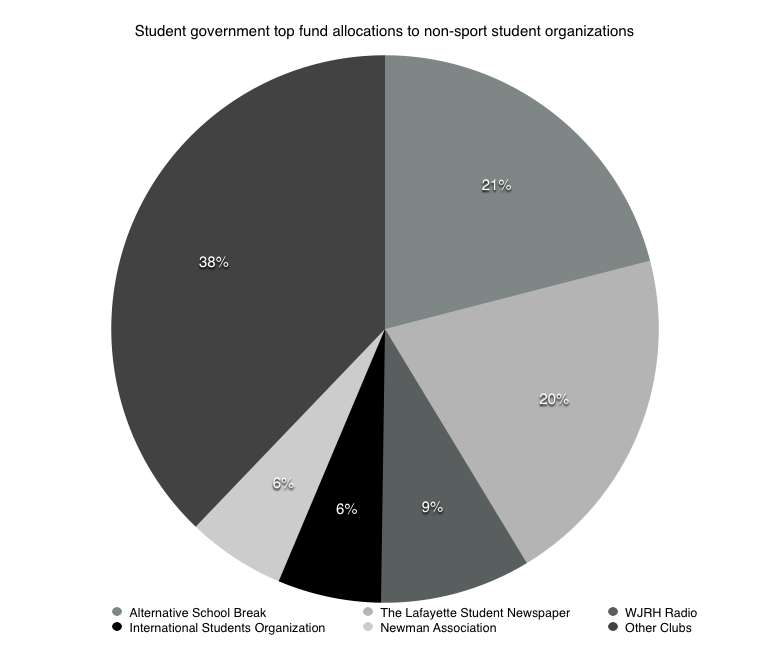 A year into the new budget system, some student clubs are confused and some are unhappy with the process of securing club funds, particularly with a new food policy and unclear rubrics to allocate money.

In the past, clubs were given a lump sum at the beginning of each semester. Under the new process, however, they are given a small amount up front and must justify further funding as the semester progresses.

Student government members admit that the new system is a work-in-progress and continues to evolve as budget requests come in.

The Student Budget Committee (SBC) in student government has the responsibility for divvying up nearly $670,000 to clubs, paid for by each student’s $270 activity fee.

“Last semester, we got a lot of feedback which we’ve been using to construct the way we handle the budget this semester,” secretary student government secretary Alexandra Bell ‘18 said.

When the new budget process started last semester, the SBC experienced funding shortages due to poorly kept records of expenditures.

“The way we’re dealing with it now is so much better than last year because we have experience to base it off of,” Chair of Student Organizations Allie d’Arenberg ‘18 said. “Leo [MacKenzie, student government treasurer] has a [standard] allocation per week so we have a very prepared track,” d’Arenberg said, acknowledging that their system is still a work in progress.

When asked about student government’s relationship with organizations, Lafayette College DiscipleMakers Christian Fellowship (LDCF) board member Rob Lowery ‘16 said that “It’s difficult to figure out what to expect [in terms of funding].”

Club leaders feel obligated to ask for more so that they receive the actual amount they need, Lowery said. “It’s worrisome that in the future, we’ll ask for what we actually need and get less.”

When the club applied for funding for a fall conference they were granted $3,320 instead of the $5,520 they requested. They based their budget request on last year’s large attendance but this year had fewer attendees than anticipated. “If we had the same numbers as last year, [the decrease in funding] would have been really harmful. But, it didn’t hurt us and it worked out,” Lowery said.

QUEST’s Condom Bingo planned for tonight night feels the effects of the SBC’s new policy, as the club was denied $700 which would go towards pizza, something QUEST guaranteed its bingo players in previous years. According to members of student government, this denial is a result of the implementation of a new no-food policy.

“[The SBC] only give[s] food for the first event,” Chair of Student Life John Walker ‘17 said. “Otherwise, if it’s not central to the event, we don’t fund it.”

Bell added that since brown bag lunches for campus events cost “$100 [each], we’re implementing the policy of not funding brown bags because students can get their own lunches.”

Some students are frustrated with this new change.

“They’ve already taken away the food budget, which makes it much more difficult for organizations who expected to get food for their events,” QUEST treasurer Becca Miller ‘16 wrote in an email. “[This policy] was not clearly communicated to the campus community or to organizations that are affected by this change in policy.”

Members of the SBC said there “was no specific rubric” for allocating funds.

“We try to be fiscally responsible,” Mackenzie said. “The main complaint people have is that it seems random. There isn’t a specific rubric we can go off of so there is an amount of subjectivity to it.”

Some clubs have been pleased with their ability to secure funds.

“I’m confident telling you that the current student government board is way more supportive to us than the previous one,” Abdel Rahman wrote in an email.

The current government offered to allocate the necessary funds for the 2015 school year’s activities as well as sponsor renovations to the prayer room. MSA requested $4,588 to fund their 9/11 Vigil and Eid al Adha Dinner, and was allocated only $2,400.

According to Abdel Rahman, MSA received the exact money necessary for this year’s Eid dinner. The disparity came from not being allocated money for t-shirts for the 9/11 vigil, which “wasn’t all that necessary so it wasn’t a big deal,” as Abdel Rahman wrote in an email.

Members of the budget committee say that another new change is the format for receiving budget information as of Nov. 1. All information must be transferred through LafSync.