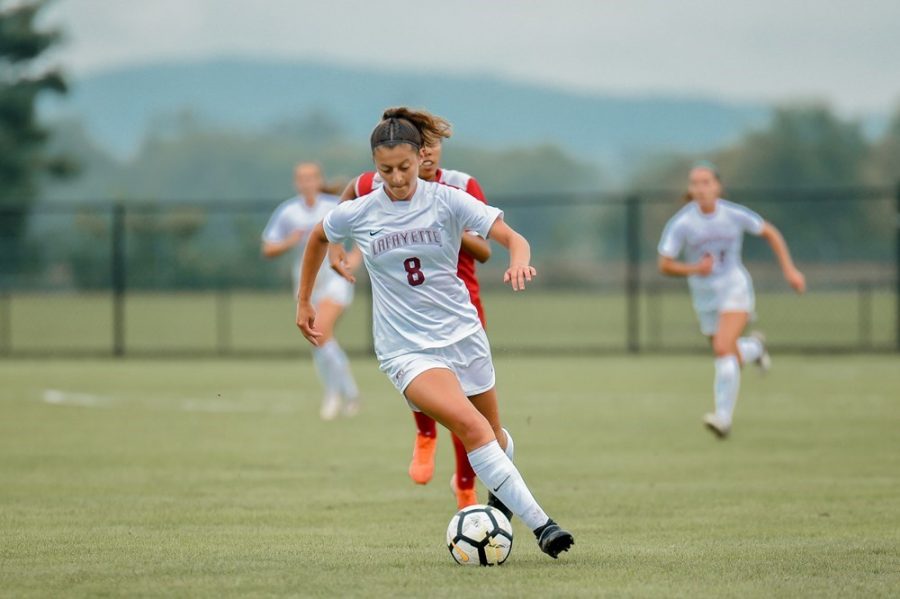 “The practices leading up to [BU] were more about keeping our legs fresh, while also implementing some game-type scenarios and intensity to model the real game,” junior goalkeeper Natalie Neumann said. “Ultimately, this week was more about mental preparation for the transition into league play from our conference games. We had great preparation, a good travel day and positive energy going into the game.”

Within the first 12 minutes of the match, junior forward Melissa Lamanna scored the first league goal off a pass from senior forward Katie Butler.

“The quality at practice especially during the last week was high and everyone looked sharp. You could definitely feel the excitement for the start of Patriot League play,” Lamanna said. “The goal we scored was probably one of the most memorable moments of the game for me. Emily Coe’s service into the box was phenomenal and Katie Butler’s quick reaction helped set up the shot well. We have been working on getting more numbers in the box, so to see it be applied in the game and result in a goal was encouraging.”

“[Lamanna’s] goal was definitely a memorable moment to put us on top early within the first half, and Emily Coe’s initial kick into the box for the goal to come was a perfect setup to the entire play,” Neumann said.

The Terriers scored twice in the final 12 minutes of regulation, with both tallies coming from Boston’s senior forward Amy Thompson. The first was off a rebound from a save by Neumann and the second was a long strike from just outside the 18-yard box that managed to get past her.

“At the beginning of the second half, I had a big breakaway save that definitely kept us in the game, but also gave us some momentum and confidence to keep pushing and working hard to prevent BU from scoring,” Neumann said.

Neumann played all 90 minutes against Boston.

“Our goalkeeper [Neumann] has been a consistent force for us, making lots of big saves to keep us in games,” Lamanna added. “Our back line has been especially good with working together to hold our line and keep communication up, and our midfield players are constantly battling to control the game which allows our forward players to get in areas to create some scoring chances.”

“Overall it was a great collective effort, and the backline especially was under a lot of pressure at times and had some key defensive moments,” Neumann said. “Unfortunately luck wasn’t on our side at the end of the game. I know we will bounce back and keep our focus fully until the 90th minute to ensure we have the best shot at securing three points each game going forward.”

Both Neumann and Lamanna added that the team will use the excitement of the upcoming rivalry game against Lehigh to fuel them and notch a win for Lafayette.

“I believe everyone who stepped on the field this weekend worked their hardest and contributed to the game in some way, which is something that makes our team so special,” Lamanna said. “The thing I admire most about this team is our resilience. We fought until the last minute and didn’t give up, which is something that will serve us well for the rest of Patriot League play and in the seasons to come.”

Lafayette women’s soccer faced Lehigh on Wednesday, Sept. 22nd, losing 2-1. The team’s next challenge will be against American tomorrow at 7 p.m.