Lafayette used to have what?: A look into the college’s defunct amenities and traditions 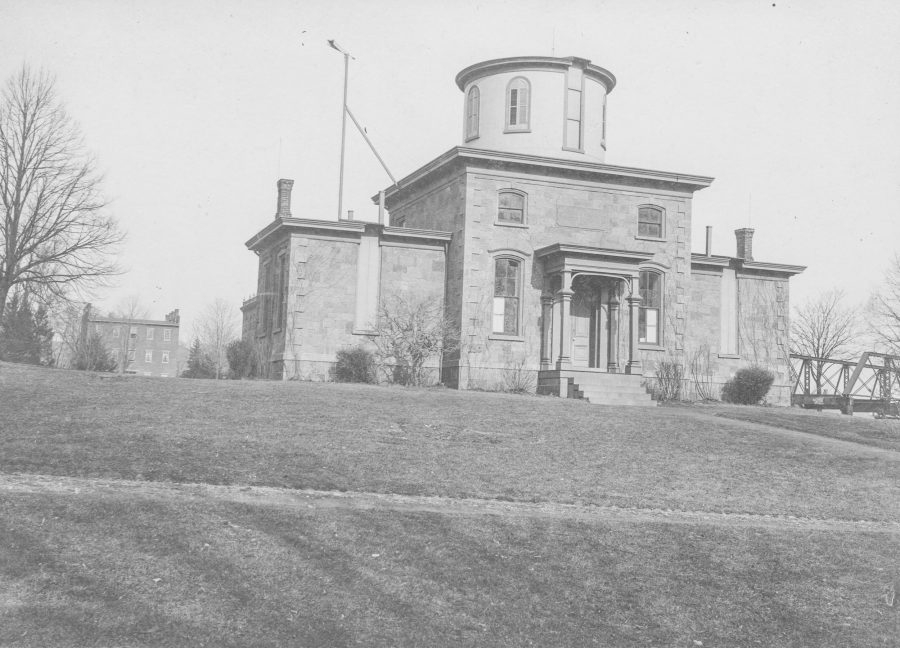 Established in 1864, Colton Chapel used to be an observatory nicknamed "Star Barn," until its demolition in 1914. (Photo courtesy of Special Collections)

Imagine a stroll across campus in 1945. There’s a military drill taking place on the quad. A room in Kirby Hall is filled with firearms. Hogg Hall has a bowling alley in its basement. By college mandate, every student is a member of ROTC.

Throughout Lafayette’s long history, a slew of facilities has come and gone. These changes are reflective of the college’s–and the country’s–social and cultural legacies.

While there are still some questions about the college’s past, Thomas Lannon, director of Special Collections and College Archives, confirmed one thing: ROTC dominated campus life. For over half a century, ROTC was such a major social and civic presence on campus that membership was mandatory for students until 1968.

During that timeframe, ROTC had deep impacts on Lafayette’s social life and on the amenities that the college housed.

The campus observatory, colloquially known as “Star Barn,” was first established in 1864. When it was demolished in 1914 to make room for Colton Chapel, its equipment was moved to a bluff along High Street and served as the campus’s first temporary ROTC headquarters.

“[The observatory] had the problems associated with a fifty-year-old building… [campus buildings] represent a certain time period… a college can’t be stuck in the past, it needs modern facilities,” Lannon said when discussing the reasons for the observatory’s closure.

In 1901, just over a decade before the observatory’s demolition, the building that is now Hogg Hall was built under the name Brainerd Hall. Originally home to the college’s student union, their focus was on Protestant-based community outreach. As the main hub of social and recreational services, the union organized a variety of campus events. The building’s basement also housed a pool table and a bowling alley.

“[It was] a time in America where Protestantism dominated an intellectual milieu, and one of those intellectual milieus was higher education in Easton, Pennsylvania,” Lannon said of the student union’s prominent relationship to broader social and cultural trends.

The building was originally devised as a space for community engagement and the gathering of diverse students–although the definition of “diversity” at the time was different from what it is today. Lafayette only admitted men until 1970, and at this time its student body was predominantly white. There were no Black students enrolled for 100 years between 1847 and 1947.

“It doesn’t read like how we think of diversity now, but it was trying to be an ecumenical place, where anyone could go… it was neutral space,” Lannon said.

According to Lannon, the space was intended for any member of a fraternity or sports team.

By the mid-20th century, these amenities in Hogg Hall’s basement, much like the observatory, had fallen out of date. Lannon described the bowling alley as being only four lanes wide.

“By the nineteen-fifties, bowling alleys have moved on and have become much bigger places, and there’s no way that space could be a bowling alley, in the modern sense,” he said.

However, since bowling was a popular recreational activity, new alleys were built in replacement. North Hall, which used to surround the area of Anderson Courtyard, was built during World War I and existed until the 1970s. The home of a new bowling alley was also the center for the ROTC presence on campus, with new gun rooms and other facilities for military operations.

Lannon directly correlated Lafayette’s historical relationship with ROTC to the larger history of America’s military in the 20th century. During both world wars, Lafayette resembled an “armed encampment,” according to Lannon. Military drills and demonstrations were frequent, gun training was overseen by the ROTC and military science was taught as a field of study during the 1960s.

From around 1955 to 1975, the attitude towards this culture underwent major changes. The civil unrest sparked by the Vietnam War and Equal Rights Movements provoked students at Lafayette to organize protests against the school’s predominant militaristic culture.

The movements were partially successful. ROTC is no longer a requirement for all students, gun rooms on campus were removed years ago and military demonstrations on the quad have ceased.

With this shift, however, the school’s observatory and bowling alley were removed. Whether or not they will ever make a return to campus may have to do with shifting social movements in the future—only time will tell.