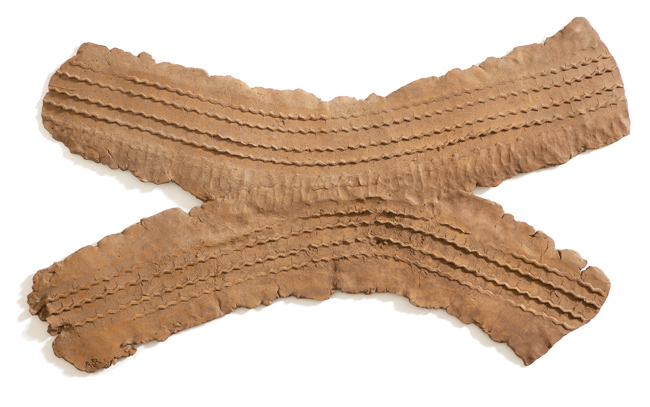 Professor-curated exhibit paves a new trail in New York City
A track mark is both a moment frozen in time and a symbol of movement, both static and dynamic.

“Making Tracks,” an exhibit curated by Professor of Art at Lafayette College Robert Mattison, is presently being shown at Jim Kempner Fine Art in New York City. The exhibit spotlights original works by American painter and graphic artist Robert Rauschenberg. It will also feature an illustrated catalog Mattison created for the event, as well as an interview he conducted with Rauschenberg’s collaborator Alan Ecker.

Rauschenberg, a forerunner to the pop art movement, is renowned for his innovative work with non-traditional materials. The collection featured within “Making Tracks” highlights the line of work he created in 1976, known as “Made in Tampa Clay Pieces.”

In order to create these pieces, Rauschenberg pressed tire tracks against clay, and assembled the impressions into different shapes.

“Rauschenberg was interested in capturing ‘the moment,’ and wanted to capture moments of life within his work,” Mattison said.

The track marks of the artist’s pieces serve as a testament not only toward the concept of time captured within a moment, but also the idea of mobility.

“To Rauschenberg, the tires reflected the change and progress within modern society,” Mattison said. “Using differently-sized tires, the way he created these pieces was like a dance or a performative piece.”

Within his essay, Mattison focuses on Rauschenberg’s hands-on process. The artist’s tactile process gave an organic feel to his work. Each piece of “Made in Tampa Clay Pieces,” in essence, has its own character.

“Rauschenberg saw things in an interesting way—he had the type of mind that saw everything at once,” Mattison said. “He was trying to draw the whole world through his art, and made the world part of his art.”

Jim Kempner Fine Art, situated in Chelsea, serves as an especially relevant section of the city to exhibit Rauschenberg’s inspired pieces capturing of “the moment.” Mattison said he is especially enthusiastic about the exhibit’s placement, because it takes advantage of New York City, which holds a plethora of artistic opportunities.

“The art world is centralized around the city,” Mattison said. “It is advantageous for Lafayette to be located so closely to New York City.”

Several student interns helped Mattison curate the exhibit over this past summer. The professor aims to continue extending outreach between the city and Lafayette College.

The exhibit will close on Nov. 8.