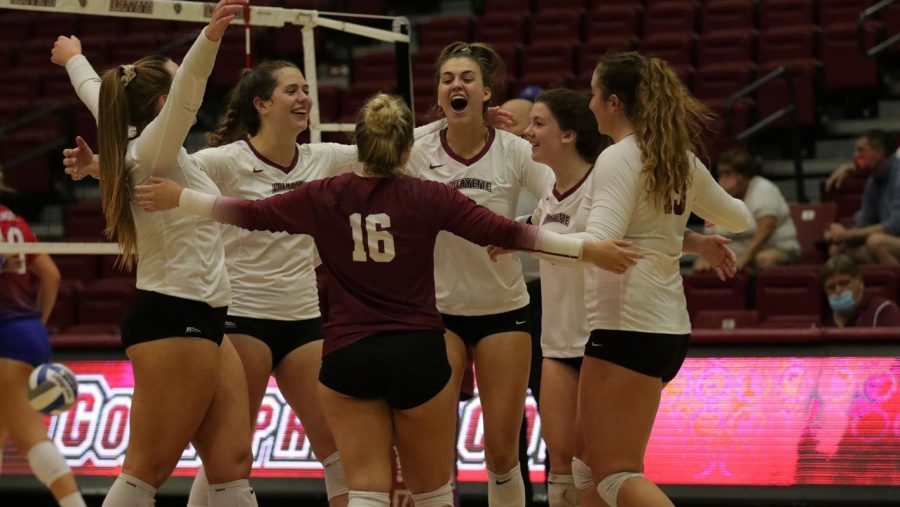 The Lafayette volleyball team is off to a red hot start in Patriot League play after a rocky start to the season. The team wrapped up non-conference play with a record of 3-5, but it has been on a tear since to bring its record to 6-6.

This past week, the Leopards secured two wins over Patriot League opponents Bucknell on Sept. 24 and rival Lehigh the following day. Lafayette dominated both matches by scores of 3-0 and 3-1, respectively.

Senior outside hitter Leanna Deegan notched her thousandth kill in the match against Lehigh, cementing her name in Lafayette’s record books.

“I actually had no clue I was near the thousand kill mark,” Deegan said. “My friend texted me before the Bucknell game asking how many more kills I need to reach a thousand and I had no idea, I had to look it up. In the Lehigh game, I didn’t know which kill was my one-thousandth kill until after the game. I have never been overly into statistics but it is a cool achievement to have. That being said, I could not have gotten the kills without my teammates so I do look at it as a team achievement.”

The team has faced tougher non-conference opponents in order to prepare for the Patriot League.

Playing in her first full season as a Leopard, Gibson notched two kills against Bucknell.

“It is exciting knowing we get to play each team twice,” Gibson said. “It was also nice having tournaments which allowed us to warm up prior to Patriot League competition and get an idea of the kind of team we were going to be. We had more time to figure ourselves out this year and I think we did a good job of that and it contributed to our good start in conference play.”

The Leopards received crucial contributions across the roster in their match against Bucknell, with freshman outside hitter Abby Nieporte adding seven kills in the winning effort.

Although the Leopards swept Bucknell in three sets, the match was not a walk in the park. After going down early in the first set, they had to claw their way back into the game.

“One of the things we have worked on a lot in practice is our energy,” Deegan said. “When we were trailing we focused on keeping a positive energy and taking each point one at a time. In the beginning, we were not passing well and once we started passing well everything came together.”

Deegan has been on a tear this season. She took home Patriot League Player of the Week honors two weeks ago and won the award again this week while notching 25 kills against Bucknell.

After falling behind 8-1 in the first set, the Leopards went on 6-0 run and traded points with Bucknell, taking a 16-13 lead. The Maroon and White closed out the first set 25-19 and carried the momentum with them for the rest of the match. The Leopards took the second and third sets 25-21 and 25-17, respectively, to complete the sweep.

Lafayette was back in action the next day against Lehigh. The Leopards showed no signs of fatigue as they handled Lehigh for their third consecutive Patriot League win.

“It was really fun, especially since we did not have any fans present at our matches in the spring,” Gibson said. “Being at Lehigh we had a lot of people cheering against us but our team really likes the atmosphere of cheering fans, even if they are cheering against us, we thrive on that energy. Even though the fans were cheering for Lehigh, it definitely motivated us to play better so we could beat them.”

The Leopards defeated Lehigh 3-1, with no sets coming easy. Lafayette dropped the first set with the teams trading points until Lehigh eventually climbed ahead. The second set was similar, with the Leopards and Mountain Hawks tied at 21 before two straight kills by Deegan propelling the Leopards to a 25-21 victory.

“I definitely went into the match against Lehigh with the mentality to be more aggressive,” Gibson said. “Being aggressive and making myself available to get the ball was something I focused on.”

The Leopards found themselves down once again in the third set 22-19 but battled back to take a 23-22 lead before eventually taking the set 27-25. The team’s mentality and leadership shone through in the tough win against Lehigh.

“I try to lead by example,” Deegan said. “We do not have captains but as a senior, I have a lot more responsibility. I try to be a role model and someone for the younger players to look up to. Now I am playing all six positions so I need to be conscious of my play, my mood, and energy because I see how it affects the team.”

“We have some really tough matches ahead of us which I think will determine which direction we go from here,” Gibson said. “But we are focusing on keeping up our hard work in practice because we recognize we have a chance to go to the Patriot League tournament which is something Lafayette has not done in a very long time. Making the Patriot League tournament is one of the big goals and it keeps us motivated, especially since we are off to such a good start in [Patriot League] play.”