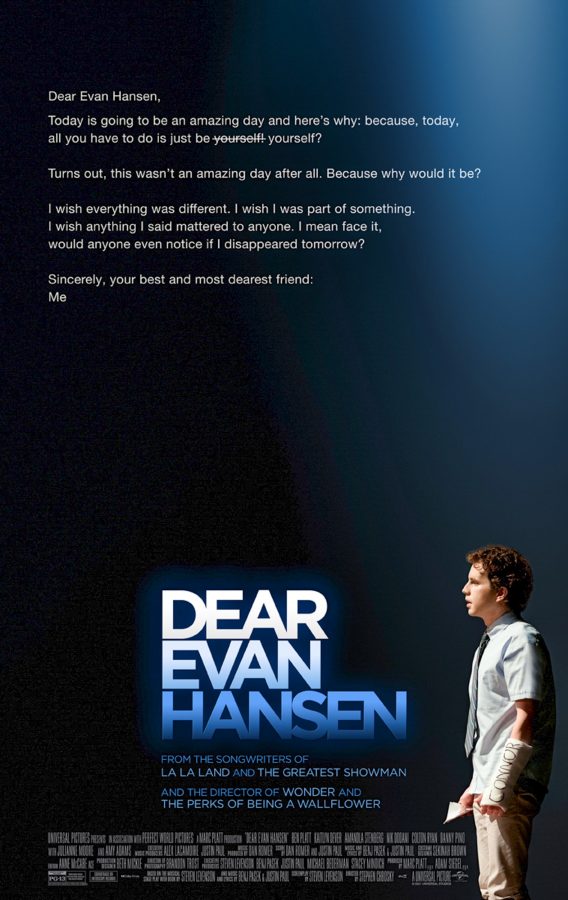 While transferring a Broadway play to the big screen may seem like a simple exercise, it can easily be done without care.

“Dear Evan Hansen” (2021), adapted from the musical of the same name, is a perfect example of the most common mistakes that occur with remakes. Even though it is not a horrible film, it’s a shame that with its $28 million budget, the 2021 release is a total downgrade of the original Broadway play in every single aspect.

The story follows a teenager named Evan Hansen (Ben Platt) who is mistaken as a friend of a delinquent classmate who has just taken his own life, Connor Murphy (Colton Ryan). Hoping to gain acceptance with his peers and Murphy’s family, he fabricates stories about his relationship with the deceased student. When his social status skyrockets, Hansen is forced to deal with the consequences of his lie.

The film relies heavily on the original play’s structure, most popular musical numbers and impactful message. However, that is not enough, as the movie lacked the boldness and courage that was displayed in the on-stage production.

I remember seeing “Dear Evan Hansen” on Broadway in 2016 when it was widely unknown and admiring the risks its creators took in telling this coming-of-age story. The musical touches on issues such as the ethics of social media and the under-recognition of psychological trauma, and also balances those serious topics with humor and energy. This could have made for a dangerous or even offensive mix, but the play overcomes this challenge successfully, making these uncomfortable subjects reachable to the average viewer.

The film adaptation, in sharp contrast, eliminates almost all of the jokes in the play, which makes the story feel very unsettling to watch. For instance, Evan Hansen is supposed to be very fast-talking and awkward, giving space for laughable scenarios. Inexplicably, Platt chose to give a slow and drawn-out performance of Hansen that completely overplays the instability and anxiety of the character. While this depiction is more realistic, it also produces melodrama that presents people with mental illness in an overly bleak light.

Another missed opportunity is the utilization of film techniques to enhance the story. The onstage production cleverly combines simple sets with magnificent projections and intricate lighting to create a very eye-catching experience that seems to fill the whole theater. Unfortunately, in the film version, the sets and the cinematography are extremely lackluster. The filmmakers seem to think that viewers will not notice how half of the song sequences revolve around a bland high school hallway. The creators could have elevated the story by taking advantage of the medium of film to show more elaborate settings or perhaps by using well-placed camera angles to provide a new way to view the story.

Additionally, shots of the singers are highly uninventive. They always seem to alternate between two angles: close-up and medium. These bland stylistic choices, juxtaposed with an upbeat soundtrack that was mostly retained from the original play, make scenes feel extremely static and awkward.

Furthermore, the close-ups on Ben Platt feel particularly strange. His character has a very awkward haircut that becomes distorted in the poor lighting of the film, despite the fact that he’s a good-looking actor.

Though the soundtrack from the original play is better, the one song that I felt was done well in the movie was “Reinvention.” This song works because it is the one time that the filmmakers decided to shoot in locations that are not possible on stage, like in an arcade and go-cart arena. I just wish that a more varied approach was taken with the other scenes.

There are also other technical aspects of the film that I feel are really inexcusable. I kid you not, a grating microphone static noise was audible many times for the duration of the film. I saw other people reacting to it too, so I knew I wasn’t just hearing things. Mistakes like this give the impression that the post-production crew members were either inexperienced or simply did not care.

Even though I did not like this film very much, there are a few good things I can say about it. Ben Platt’s singing voice is still astounding, and at some moments it makes you forget the film’s drab visual choices. The performances, while mostly unmemorable, work fine. At the very least, the movie makes the story more accessible for those who cannot make their way to a live performance. However, if the filmmakers’ goal was to transfer the story into a more accessible medium, they should have just taped the on-stage production and turned it into a film, like Lin-Manuel Miranda chose to do with “Hamilton” on Disney+.

Those who want to experience “Dear Evan Hansen” in a new form might be disappointed with this remake. If you’re really curious, check it out when it arrives on streaming services, but I think it is definitely better to save your money on this one.