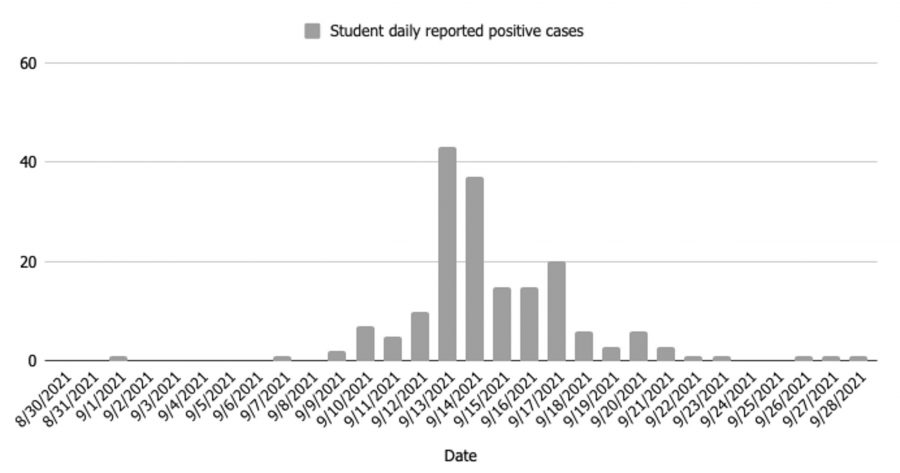 While the administration attributes most of the September surge in cases to Greek Life, fraternity and sorority presidents rejected this claim and criticized the suspension on new-member activities in a letter to the College. (Photo courtesy of Lafayette College COVID-19 Action Group)

The recent spike in COVID-19 cases on campus coincided with Rush Week. All members of the pledge class are a sophomore or above, and only around one percent of cases during September’s surge were among first-year students, according to a statement from Lafayette’s COVID-19 action group. Up to 70% of these cases were attributed to Greek life events by the action group.

As a result, the college has shuttered all new-member activities at fraternities and sororities until at least Oct. 13.

Activities related to Greek recruitment can be ideal for the transmission of covid, Vice President of Campus Life Annette Diorio, a member of the COVID-19 Action Group, said.

“The most salient issue here is that recruitment events mix more broad numbers of students together for multiple nights in a row,” Diorio said of Rush Week. “This is not a criticism of the Greek organizations. They have structured events that introduce students to each organization so the same students move through five or six different settings that are, typically, indoors.”

Diorio went on to clarify at Wednesday’s covid Town Hall that the administration did not intend to blame Greek life for the spike in cases.

Each Greek life organization (GLO) has a set of recommendations from their national counterparts for how these events should be structured in the present covid setting. In addition to abiding by CDC and college guidance, recommendations include installing covid safety officers, holding virtual events whenever possible and limiting the size of in-person events.

Lafayette has had a mask mandate for all in-person events throughout the entire semester. Diorio noted that the college had also asked GLOs to mask and socially distance inside of chapter houses, hold events outside when possible and offer pre-packaged food, at least during the recruitment period. According to Greek Life Advisor Jake Bates, there was no requirement for GLOs to have mitigation strategies prior to the outbreak.

Dr. Jeffrey Goldstein, Lafayette’s director of health services, believes that most infections related to Greek life stem from congregating indoors without masks, a violation of CDC and college guidelines.

Such conclusions by administrators led to a cessation of all recruitment activities, both in-person and virtual until concrete covid mitigation plans are devised, according to an update released on Sept. 23. Bates and Dean of Students Brian Samble wrote in an email to GLO presidents that this suspension was in part due to infected students needing to “catch up after absences” from classes. It went on to recommend that GLOs conduct limited engagement with prospective members virtually and that all mitigation plans were to be approved by Bates himself. Such guidance has been unwelcome by Greek leaders.

One fraternity president who wished to remain anonymous stated that he appreciates Lafayette’s commitment to community health, but feels that “publicly pointing towards Greek life while the school was unprepared is an issue.”

“Whereas it is evident that Greek life did correlate to this surge of cases early in the semester according to the school’s findings, recruitment is no less risky than SHEESH parties, sports teams/events, Milos or College Hill Tavern,” he continued.

A lengthy letter to administrators from Hank Scheffler ‘22, president of the Interfraternity Council and the Delta Kappa Epsilon (DKE) Fraternity, accused Samble and Bates of “patronizing” the Greek community by not including them in the decision to suspend Greek operations through October.

The letter disputed the claim that Greek members were behind on their work, alleged that Greek members may not actually constitute the reported proportion of infections and accused the college of being “cruel ” towards prospective pledges. To that end, it challenged the college to poll prospective members on their attitudes toward the suspension and demanded more data on how and to whom covid tests were given.

All GLO presidents co-signed the letter. With the exception of Nieves, Zeta Psi President Sam Kirby ’22 and Delta Gamma President Kathryn Ward ’22 , no other presidents responded to multiple requests for comment.

As noted in the letter, there was a sense among Greek leaders that widespread vaccination–around 97% of students–would help prevent the spread of COVID. Vaccines have been proven effective against serious illness and most transmission, but the Delta variant is more transmissible, according to the CDC.

“We expected that our high vaccination rate on campus would prevent large numbers of students from becoming infected. Unfortunately, the breakthrough rate of infection was much higher than anticipated,” Goldstein wrote in an email.

Goldstein agreed that “there were specific GLOs that had disproportionately higher rates than others.”

Because of the mobile nature of recruitment, the new guidance applies to all GLOs, no matter the case count. The GLO presidents’ letter, in response, blasts the guidance as a “totalitarian, illogical” penalty for Greek life whose logic would not pass as a class assignment.

Diorio declined to comment on the content of the letter, stating “I don’t want to put more fuel on the fire.”