Faculty frustrated by lack of compensation from pandemic pay cuts 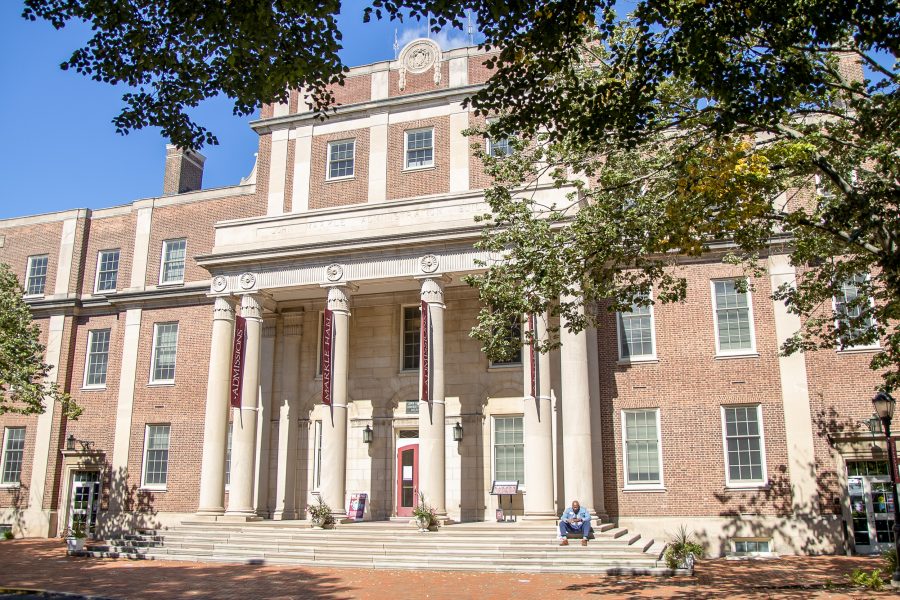 The cut in pay and retirement benefits, all during the challenges of the pandemic, upset many professors, who responded in an email to the administration in summer 2020. (Photo by Kwasi Obeng-Dankwa '23)

Due to the financial strain of the pandemic, faculty experienced a monetary loss to make up for some of the college’s lost funds. On May 28, 2020, the college announced a “progressive pay reduction” and a “suspension of the college’s contribution to the retirement plan” to faculty members in an email.

In response, over 120 professors signed a response email to the administration on July 14, 2020, in which they listed their demands. They called for clearer communication, autonomy for faculty on deciding how to hold classes during the pandemic, a clear response to structural racism on campus as well as numerical benchmarks for salary reinstatement.

The email asked that the college “clarify how the most vulnerable members of our community–staff making less than 50 thousand dollars, untenured faculty–are prioritized and provide information about what reinstated compensation will include. The college should commit publicly to making no further compensation reductions during the COVID-19 crisis except as a last resort.”

Since that email was sent, pay has been restored to what it was prior to the pandemic. Retirement plans have also been reinstated. However, none of the losses have been retroactively paid back, according to the faculty.

Although top officials like the president opted to take a pay cut along with the professors, the faculty expressed their frustration at the administration regarding the situation, specifically that their pay was cut during a pandemic.

“All this ‘monetary sacrifice’ occurred while we were also working harder and longer to convert our courses to remote and to deal with all the fallout from the pandemic,” biology and neuroscience professor Elaine Reynolds wrote in an email. “For some people, the pay cut had dramatic effects. Imagine if you made $50000 and lost any of your salary.”

History professor Joshua Sanborn echoed this statement, noting that at a time when support from the administration was so heavily needed, the pay cuts were difficult to understand.

“Obviously it’s been very stressful for everybody in the world—the last couple of years. And so you kind of want to feel community support at that point, and you definitely want to feel support from the administration and the board more than just saying very nice things about us,” Sanborn said. “There have not really been any of the concrete things that other schools have done and are doing.”

Sanborn also noted that professors were put in an incredibly unprecedented position, facing a lack of monetary recognition while learning how to provide a quality education over Zoom and conduct classes in an entirely new capacity.

“Had a catastrophic financial situation occurred, [the pay cut] seemed reasonable. But when it became clear that the financial impact was substantially less, in large part honestly [due] to the faculty and staff stepping up and doing everything they could to provide a high-quality education to students in the fall despite us being remote, it was incredibly disappointing that the [losses] were never restored,” Sanborn said.

“We really had to pivot partway through a semester to do things that were totally different and unexpected. And basically, everyone stepped up and found ways to sort of adjust,” math professor Ethan Berkove said.

Costs associated with the pandemic, including room and board refunds as well concerns about loss of financial aid as a result of declining enrollment, were used to justify the pay cuts.

Lafayette runs on a shared governance model. This means that the administration, faculty and board of trustees are all supposed to have an equal say in decisions affecting the college. Some professors felt that their voice was not heard within this model and that administrators made the decisions mainly with faculty completely removed.

“Part of the principles of shared governance that a lot of liberal arts colleges have is that faculty are going to be part of the decision-making process, so if we’re part of decisions, like to cut pay, then we have part ownership of it,” Sanborn said. “But it definitely feels like all the decisions are being made in the president’s cabinet or at the board, which is not a transparent process to us. And then the decisions are explained to us and our reactions are managed at that point.”

Anthropology and sociology professor Neha Vora said that the lack of communication results in faculty feeling devalued and not meaningfully appreciated within both Lafayette and the administrative body.

“I see other colleges and universities where the faculty are consulted in a meaningful way, where education is valued more, we don’t seem to have that kind of culture right now. It seems to have gotten much worse over the course of the pandemic,” she said.

For many, seeing the endowment crest one billion dollars while they had pay cuts was upsetting. While the administration described the difference in money for the endowment and money for their salary, many professors expressed frustration.

“It’s hard to avoid the impression that our retirement savings are being used to bolster the college’s endowment, and that’s painful,” Sanborn said. “After all that faculty and staff and others sacrificed over the course of the pandemic to feel like the administration and the board did not commit to us as parts of the community, but they committed more strongly to the endowment.”

Vora continued this sentiment, adding that the growth of the endowment felt like taking money away from the professors.

The way the pay cut was instituted made it so that those getting paid less got a smaller percentage of their income taken away. However, raises are cumulative, so losing even a small amount of money one year–especially early on in a career–can result in large losses over time if the pay is never reinstated.

“If you don’t have one thousand dollars at the beginning of your career, you don’t have that thousand dollars over your entire career and so over 30 years, a difference of a thousand dollars in one year, which doesn’t seem so big actually compounds to be quite a bit larger,” Berkove explained. “And what this means is for folks at the early stages of their career, losing some of the salary can have pretty significant downstream effects if it’s not addressed at some point. I think that’s something that the college needs to address.”

The faculty’s most pressing need is the want to feel valued by having a say in the process and see more communication from the administration.

“We need to have honest engagement and honest engagement in the decision-making process and all the structures are there,” Sanborn said. “It’s just that there needs to be more good faith effort taken by the administration and the board than was present during the pandemic.”