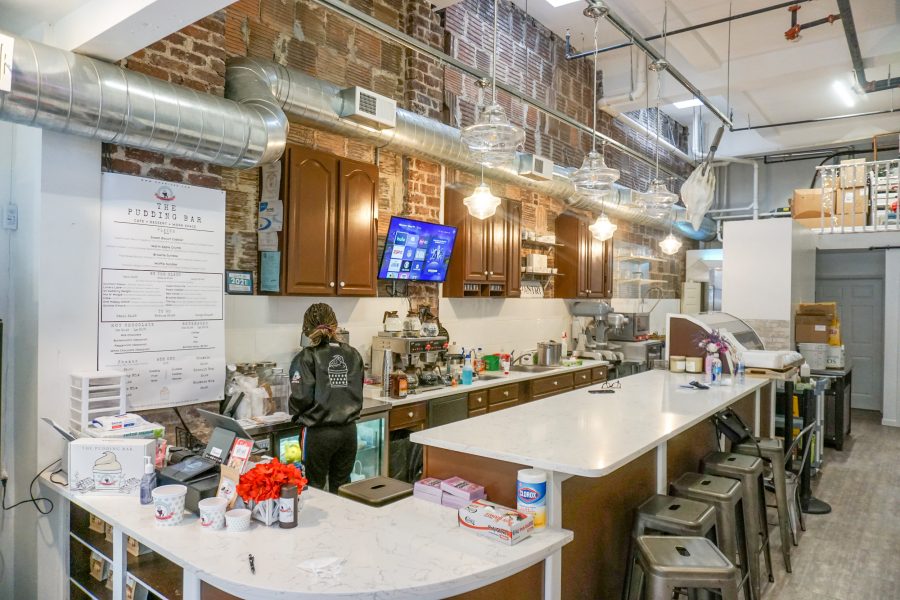 For Khanisa and Sean Darby, the married co-owners of Khanisa’s Pudding Bar, making pudding has always been a family affair.

“Banana pudding is a big dessert for us in New Jersey. If you’re having a barbecue or a family gathering, someone in your family usually makes banana pudding,” Khanisa, the shop’s head baker, said.

Khanisa explained that when she first made pudding for a family function, “everybody raved over it.” Sean, the business’s current marketing director, who was working in copy machine sales and marketing at the time, suggested they start a business page for the pudding to gauge interest.

Orders started coming in after Khanisa posted a photo of the pudding on her personal Facebook page. The picture received nearly 100 comments.

From there, Khanisa and Sean used their combined experience to start Khanisa’s Pudding Bar, which first opened at the Lehigh Valley Mall in June 2016.

The store’s early menu included the classic banana pudding, as well as three additional flavors and seasonal holiday flavors. As time went on, the pair continued to add drinks, waffles and brownie sundaes to the menu.

“We wanted to add some traditional desserts that would pair well with pudding,” Khanisa said.

Their menu now features 13 pudding options alongside other dessert plates, milkshakes and hot drinks like tea and coffee.

The Pudding Bar opened at its current location of 118 Northampton St in August 2019. Soon after opening, however, the COVID-19 pandemic broke out, and the Darbys had to get innovative.

“We basically barricaded the front of the store with a big desk so people couldn’t come in, and then they were only able to order at the door, like a drive-through kind of alternative,” Sean said. “We were able to stay afloat that way.”

Throughout the pandemic, Khanisa’s Pudding Bar has been selling dry mixes, which are pudding, brownie and waffle mixes that customers can make at home. The Pudding Bar also offers a catering option for larger events, which Khanisa said has been popular among guests.

“We love catering because you get to showcase the desserts in a different way,” Khanisa said.

During the pandemic, the business has catered events ranging from birthday parties to weddings.

“We had one couple that got married, but they used pudding in their photos instead of a cake. Because it was pandemic times, they did it at home, but it was beautiful, and the pictures are beautiful,” Khanisa said.

The Darbys hope the store will be a welcoming space for the Lafayette community.

“We love Lafayette,” Sean said. “Before the pandemic, it was really cool because sometimes the sports teams would come down, so we would have a lot of students at once.”

“Students can come here just to hang out,” Sean continued.  “If you wanna get away from school and go off grounds, just to chill and do some studying, our doors are always open for that.”

Both students and staff of the college receive a 10% discount at Khanisa’s Pudding Bar.

Although the shop was forced to temporarily close in June 2021 due to water damage from a nearby tenant, it will host its grand re-opening tomorrow, Oct. 9.