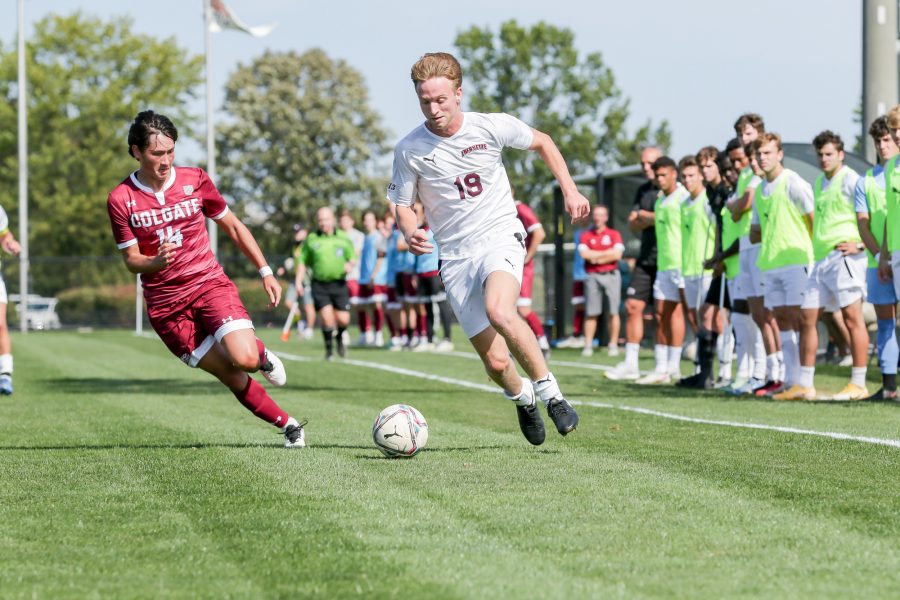 Sophomore Carter Houlihan handles the ball as the Leopards dominate in the battle against Colgate, holding them to just two shots on goal. (Photo courtesy of Athletic Communications)

The Lafayette men’s soccer team (6-4-1 overall) defeated the Colgate Raiders 1-0 at home on Saturday afternoon. With this win, they improve to a 2-1-1 record in Patriot League play this season.

The game’s only goal came in the 26th minute from junior midfielder David Mizrahi, who headed the ball into the far left corner after a free-kick by senior defender Andrew Venezia.

Both teams came out to play a strong defensive game, evidenced by the lack of scoring on the day.

Lafayette had a chance in the second half to increase the lead to two off a shot from junior midfielder Yiannis Panayides, but the Raiders’ goalkeeper was able to make the save.

Mizrahi, Panayides, and senior forward Marcos Kitromilides led the way for the Leopards in shots.

“As a center defensive-midfielder, scoring opportunities are rare for me, so off free kicks or corners kicks, I always try to capitalize on chances,” Mizrahi said. “I am an aggressive player out of the air and we have scored on free kicks before, so I was confident and ready to attack the ball.”

“[Venezia] provided a great ball into the box with a ton of pace, so I knew if I just directed it towards the goal it had a great chance of going in,” Mizrahi said.

Lafayette dominated throughout the game, outshooting Colgate 9 to 2, with two of those shots being on target. They also had more corner kicks and controlled the majority of possessions as well.

The Raiders did produce a shot on target, but senior goalkeeper Alex Sutton made the save to earn another clean sheet. Having played three Patriot League home games so far this season, Sutton has yet to be beaten.

“Personally, I am proud of us and think we had a great team performance. Working as a unit, we implemented certain tactics that we talked about before the game and executed our game plan effectively,” Mizrahi said. “We’ve been taking games one at a time and focusing on not only our individual performances but specifically what we each can do to contribute to the entire team effort.”

With Lafayette moving to fourth in the Patriot League standings after this win, they now improve to a positive record after a defeat midweek to Navy.

“With a winning record so far, obviously we are feeling very confident, but we are not satisfied yet,” Mizrahi said. “We have had some big important wins, but there is always room for improvement.”

“Each week, we focus on the next game ahead of us and we’re hoping that if we keep working we can come back for redemption in the Patriot League championship this year,” Mizrahi added.

The Leopards will be traveling to Loyola Maryland on Saturday, Oct. 9 for a game at 5 p.m.