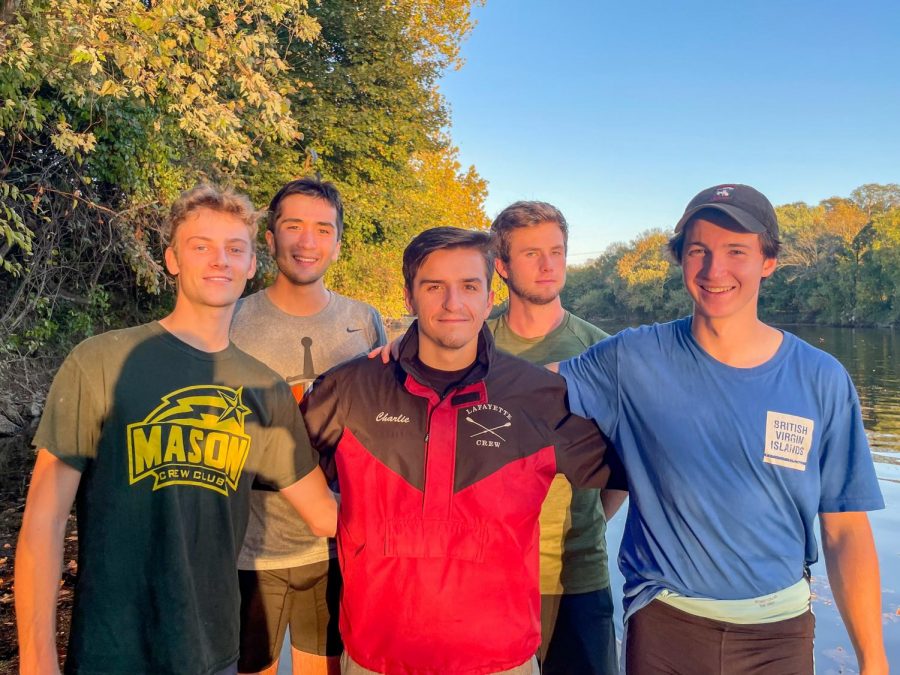 The Lafayette crew team medaled in every event they participated in on Sunday at the Overpeck Fall Classic in Leonia, NJ, dominating in both the men's and women's Collegiate 4+ and Collegiate 8+ events. (Photo courtesy of Abby Hammel '23)

The Lafayette crew team spent Sunday at the Overpeck Fall Classic in Leonia, NJ, where they won medals in all events in which the team was entered.

The women’s collegiate 4+ beat Manhattan by 37 seconds. The boat was coxed by senior Erika Nally and included seniors Haley Simpson and Elizabeth Good and juniors Abby Hammel and Lauren Salbinski.

Ames sat in the stroke seat for the varsity men’s 4+ and 8+ events, which is an important position for setting the pace of the boat.

“My coach looks for someone really consistent at stroke, and I like to think that I’m able to kind of push the rest of my boat to be aggressive, instead of getting sloppy or slow,” Ames said.

Ames expressed that being at stroke makes him feel like he’s having an impact on the boat as a whole.

“I absolutely love sitting in that position. It’s very difficult for one person to have a huge impact on the feel of the boat, but if I set a rhythm, I can hopefully set the boat up to be in a position where everyone can can pull their hardest,” he said.

Lastly, the Lafayette men’s collegiate 8+ won its event by more than a minute.

“We did well ‘staying in our own boat’, which is a term we use. We were very confident in our ability to win, and we ended up winning by over a minute. That’s unheard of in rowing, that’s very much of a landslide,” Ames said.

This boat was coxed by Scorsone once again, and included Ames, Finlay, Flint, Grote, sophomores Eliot Rusk and Alan Jones, Mina, and Dubischar.

“We function as a boat, so it’s very difficult to have highlights, but this season, [Grote] has really stepped up and has been making a lot of changes and adjusting,” Ames said. “He was kind of put in the boat at the last minute and has the least experience in the boat by a lot. [Flint], [Finlay], [Scorsone] and I have been rowing all throughout high school and college, so we have years of experience. It’s been nice because we met him in the middle but we’ve really pulled him up to our level.”

Ames also commemorated Finlay, who sits in the bow seat.

“Finlay has been rowing at a really competitive level since he was a junior in high school. He’s done a lot of the pulling teammates up to speed. Having him in the bow where he can see everybody, he almost acts as a second coach,” Ames said. “At the end of the practice, he can tell us what we’ve been doing, which has been helpful.”

The crew team has been preparing for next weekend’s trip to Boston to compete at the prestigious Head of the Charles Regatta.

Ames explained that in order to perform well at this kind of regatta, they have to be “comfortable with chaos.”

“The Charles is a race where you’ve got these massive turns, and it’s always windy because of the architecture of Boston being right next to the city. It’s also always choppy because of the river and the way it flows, and it’s hectic with the level of competition and how there’s going to be two thousand and five hundred boats there,” Ames said.

While the team usually practices on a straight, calmer section of the river for a lot of the season, they are now shifting gears in preparation for the Head of the Charles.

“This week we’re shifting to the part of the river that runs under two bridges and turns about forty-five degrees. The water flows weird, and there’s sticks floating in it. We’ve been using that at more of a race pace, so it’s less calm and controlled,” he said. “We’re spending this week practicing that chaos.”