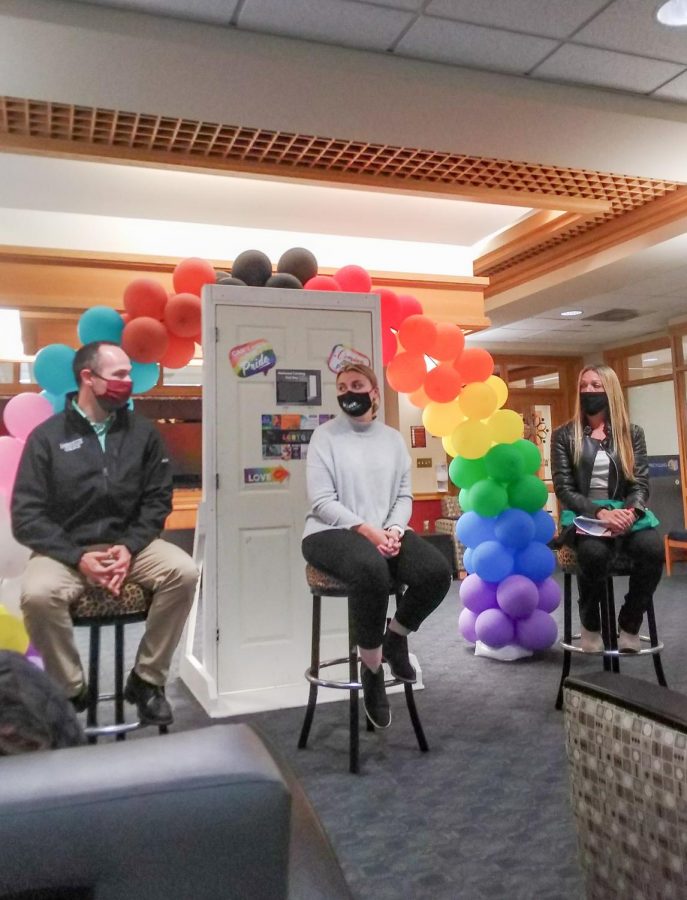 Dean of Students Brian Samble, Title IX Coordinator Amanda Haninck and Student Advocacy & Prevention Coordinator Kate Bednarsky (left to right) discussed the frequency of sexual assault on campus and their efforts to prevent it to a group of about 15 students. (Photo by Gilad Evans '24)

On Monday, a small group of students gathered in the Farinon atrium for a panel led by Dean of Students Brian Samble, Director of Educational Equity Amanda Hanincik and Student Advocacy & Prevention Coordinator Kate Bednarsky. The group discussed the “Red Zone,” a time on college campuses spanning from the beginning months of the fall semester to Thanksgiving break during which most of all campus sexual assaults are statistically found to occur.

Illustrating the severity of this problem, Hanincik shared that her office received 13 reports of sexual assault, stalking and other forms of harassment since July 1.

Both Hanincik and Samble spoke to the importance of students intervening when a situation becomes dangerous. Stopping sexual assault at a party, for example, can come down to “pulling [a friend] aside to see if they need to go home early in the night [when faced with a potential threat],” according to Samble.

Samble joined the Lafayette community on April 1. Prior to this, Samble was the assistant dean of student affairs and Title IX coordinator at Franklin & Marshall.

He also highlighted the importance of having conversations surrounding topics like consent.

Echoing these comments, Vice President of Campus Life Annette Diorio spoke to the effectiveness of bystanders intervening to prevent instances of sexual assault. In particular, she answered questions about bystander syndrome, the tendency for individuals not to help a victim when others are present. Diorio emphasized the benefits of intervening even when around other people.

One question from the audience focused on Greek Life, which has been accused of having played a role in facilitating sexual assault on campus. Samble stated that reporting cases of sexual assaults enable him and his team to find distinct trends and patterns that could be emerging. He also emphasized the importance of reaching out to all groups to educate them about sexual assault so they can help stop it.

“It’s been reaching out to chapters and different teams that have smaller associations. [We] really do a lot of outreach in those groups on ground level,” Samble said. “There will be more coming on approaches we’ll take towards alcohol, expectations we’ll have, but also rewards for having responsible parties and gatherings.”

Samble emphasized the importance of working together with chapters and educating their members to create a safe environment on campus. When asked about what could be done in the event of a hypothetical cover-up by a group such as Greek Life, Samble explained that the ability to intervene in an event comes down to the report they are given. However, he cited elements of their conduct code which state that those who fail to comply with reports could be punished.

“I think there are other avenues to address someone obstructing the process virtually or intimidating witnesses. I think there’s plenty of avenues within our ethic code and conduct codes we’ve established,” Samble said.

One member of the audience asked what circumstances could get the police involved. Bednarsky noted that victims have a right to go to the police to have a criminal investigation into the matter or they could come to the college officers to handle the case.

“They can do both simultaneously, but it’s really up to the victims themselves to make that decision,” she said.