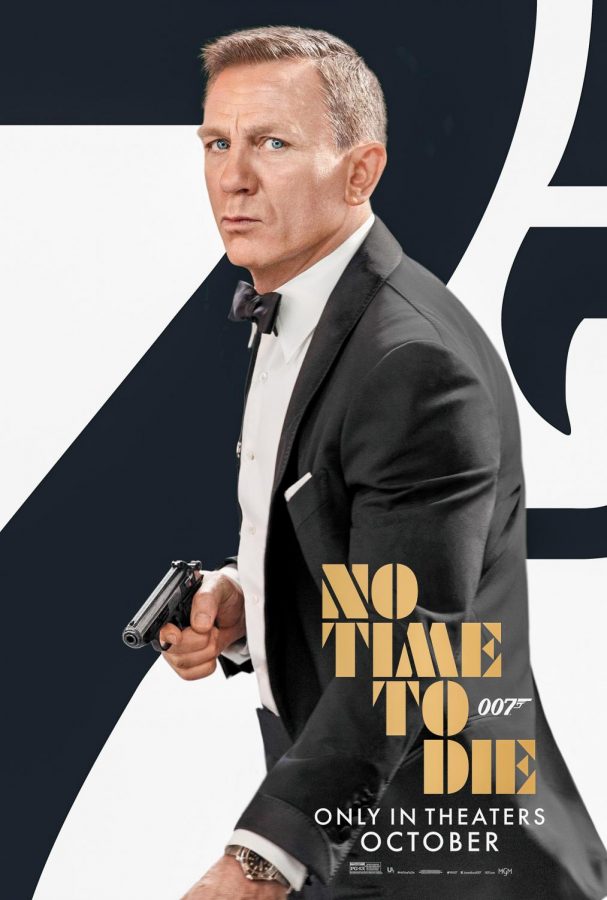 Everyone coming into “No Time to Die” (2021), the last of Daniel Craig’s portrayal of MI6 agent James Bond, is asking one question: where does Bond go from here?

It’s not the smoothest journey getting there, but this movie does deliver an answer. This time, Bond comes out of retirement to rescue a kidnapped scientist and save millions from a lethal bioweapon. While on his mission, he must also navigate difficult circumstances with love interest Dr. Madeleine Swann (Léa Seydoux), who shares a complicated past with villains Blofeld (Christoph Waltz) and Lyutsifer Safin (Rami Malek).

Overall, many moments are impressively shot and choreographed, and the action scenes are entertaining. Despite this, several scenes drag on. Midway through my viewing of the film, I thought to myself that this was a very average Bond experience. However, one element propels the journey to the next level. Quite intelligently, the pieces of this picture come together with a very unexpected twist. There are moments that make the three-hour runtime worth sitting through, though I dare not spoil them here.

It’s nice to know that a 60-year-old series can still pull out a few surprises.

What really makes this adventure stand out is Bond’s personal life, specifically his relationships with women. Viewers will be surprised that he’s not the sleazy alpha male of the past but a loyal, monogamous man who comes to respect his female coworkers.

Bond’s characterization is also enhanced by the film’s worthy antagonist, Lyutsifer Safin. While the “taking over the world” premise has been done countless times, Safin keeps the plot intriguing to watch. His dialogue is mostly well-written and his backstory is teased in a way that keeps the viewer guessing.

Unfortunately, not all of the film’s villains are well portrayed. Blofeld and the kidnapped scientist are not worth their screen time. Both are stereotypical, needless plot devices that the film exploits for predictable twists and one-liners. They are not embarrassing, but they are also not necessary.

One consequence of these extraneous characters is that the movie didn’t focus enough on characters that deserved more attention. For example, the film begins with a dramatic flashback that showcases Madeleine’s backstory. It is later revealed that she is a psychotherapist. Both elements add distinctive qualities to the film and I wish they had been further explored. However, as the plot thickens, moments of Madeleine’s characterization decrease. Eventually, she becomes merely another pawn in service of the plot.

In its defense, the film features a number of other female side characters with diverse nationalities who are capable fighters with distinctive personalities. Moneypenny (Naomie Harris) is gentle and welcoming. Nomi (Lashana Lynch) is gritty and serious. My personal favorite was Ana de Armas’s portrayal of CIA agent Paloma, who brings a charming sense of humor to the film’s action scenes.

Going forward, I’m excited to see how the James Bond franchise plans to continue its moves toward equality and equity. It’s clear from this increasingly diverse cast that filmmakers are conscious of present-day audience members who are more scrupulous towards issues of inclusivity, race and gender. However, if these gestures truly hold any weight, I believe a person of color must be chosen to replace Craig as the next James Bond.

While my favorite Bond films are still “Casino Royale” (2006) and “Skyfall” (2012), “No Time to Die” stands firmly alongside those two. Longtime fans will adore this film for the homages to previous Bond films which are littered throughout, and I believe they will also enjoy some of the more modern touches.