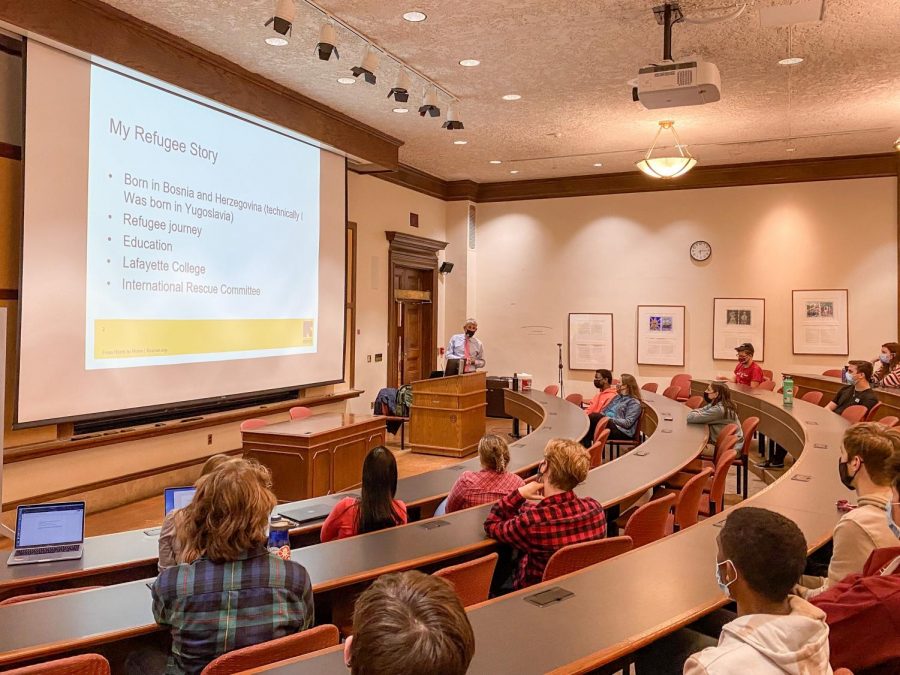 Jas Verem spoke about his work with the Elizabeth, New Jersey brach of the International Rescue Committee, inviting students to volunteer. (Photo by Caroline Burns '22)

This Wednesday, Jas Verem ‘00 described his turbulent upbringing and his work with the New Jersey office of the International Rescue Committee (IRC) at Refugee Action’s keynote event.

Born into a Muslim family in what is now Bosnia and Herzegovina, Verem faced difficult experiences growing up because of ethnic conflict that marked the Balkans in the 1990s. He noted that his father was imprisoned in a concentration camp for two years, that Verem learned English from working at a library in a refugee camp and that UN soldiers were tasked with guarding the tent.

Amid this difficulty, Verem was accepted to United World College, an organization that allowed him to attend school in Wales. Following his studies, he applied–and to his surprise–was accepted to Lafayette.

“My essay was due on January fourth, and I spent the whole night on January third writing it. There was no typing, no computer. I sent it in, and Lafayette was the only school that accepted me,” Verem said. “ They gave me a full-ride, which without it I would have never made it.”

Verem then described the origins and work done by the IRC. The committee was founded in 1933 by scientist Albert Einstein and has expanded to have offices in 40 countries and 25 U.S. cities. Verem noted that the number of employees varied between American cities with an IRC office, from 25 in his office in Elizabethtown, New Jersey, to 100 in the office located in San Diego, California.

Verem emphasized the large impact of the IRC in delivering help to refugees and asylum seekers in hostile situations through refugee camps.

“So refugee camps primarily deliver relief, providing education in different contexts,” Verem said. “IRC also acts as a refugee settlement processing center where refugees who are trying to really go anywhere in the Western world go to the IRC as a kind of processing center facility.”

Verem discussed how the refugees handled by the non-profit organization are guided through their transition to their new location.

“So we have an integration department, obviously, you can have anything from employment authorization cards, green cards, choosing locations, things like that. They cover all that and we have services,” Verem said. “Once we accept the refugee, we’re going to try to find housing, enroll in school, provide English as a second language classes, and find a job.”

Verem also took time to highlight the difficulties refugees face in moving to the United States and the amount of resources it expends.

“To become a refugee, it takes years to come to the United States. That’s one of the big misperceptions, that refugees come overnight. It takes years,” Verem said.

He also added that the majority of refugees come from war-torn areas such as Syria and Afghanistan. However, with the hard stance against refugees taken by the Trump administration, refugee numbers have plummeted in recent years as organizations lost significant funding.

“President Trump and his administration had done everything they could to slow down and effectively stop refugee settlement,” Verem said.

Verem concluded by stating that the IRC relies heavily on volunteers and interns, inviting those interested to apply to the IRC to aid refugees and get experience.