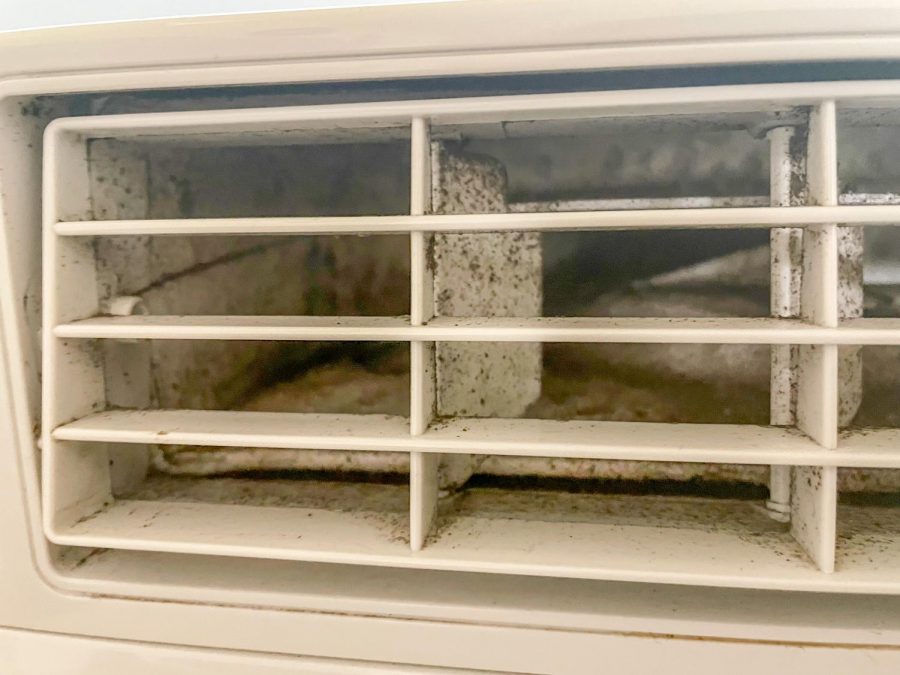 A photo of back mold in an air conditioning in Pi Phi. (Photo courtesy of Devin Croake '22)

Over the past few weeks, students living in McKeen Hall, March Hall, the Pi Beta Phi house and Easton Hall have experienced cases of mold in their residential areas.

Caroline McParland ‘23, who lives in the Pi Phi house, noted that many of the girls living in the house with her noticed mold near the beginning of the semester. She said that the mold seemed to be concentrated in the basement, the air conditioning units and on the blinds.

“The mold was definitely a concern in our house because for about a month, almost everyone in the house was experiencing cold symptoms which we thought was in relation to the mold,” McParland said.

Several of the girls, including McParland, who had experienced these symptoms started to feel relief after facilities came, cleaned the area, and changed the air conditioning units.

“I…have felt better after the mold was scrubbed off my blinds and a new AC unit was put in by facilities,” McParland said.

According to The CDC, exposure to molds can cause illnesses including upper respiratory tract infections, asthma-like symptoms and increased intensity of allergies. These symptoms are greatly increased for individuals who have pre-existing conditions like autoimmune disorders or asthma. For those who are at an increased risk, the CDC recommends the use of dehumidifiers in cold months in order to combat the spread of mold.

Several of the students exposed to mold went to Bailey’s Health Center after becoming sick. The nurses there said they had treated a handful of students who claimed to have been affected by the mold from either their dorms and explained that these symptoms could very well be linked to their exposure to mold.

Residence Advisors from March Hall and McKeen Hall did not respond to a request for comment.

This isn’t the first time College Hill has experienced mold problems. In October of 2018, The Lafayette reported on instances of mold in March and Ramer Halls. While the issue was quickly taken care of, it has returned three years later on a larger scale.

According to Tim Hugo ’22, the director of student services for student government, his committee recently had a meeting with Residence Life and Facilities to address the issue and create an action plan.