Lafayette’s castle on the hill: A look at the Chateau 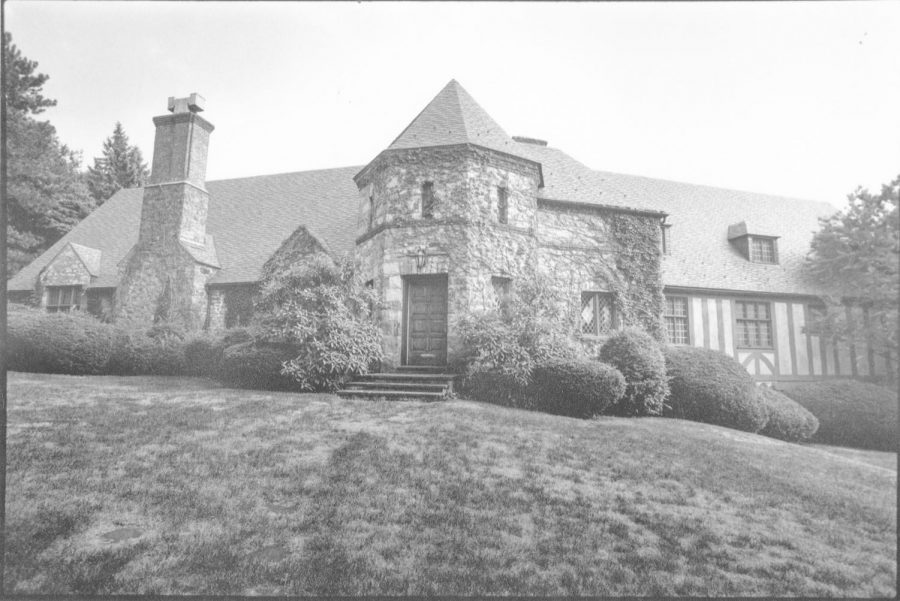 The Chateau was owned by the Kirby family until 1983 when it was donated to the college. Photo taken in 1983. (Photo courtesy of Lafayette College Special Collections)

Before football games could be broadcast on national television, Lafayette alumni sat on the patio of the Chateau, the college’s large Norman French-style house on College Hill, and watched every home football game.

The Chateau is a grand residence located on Paxinosa Ridge, complete with a great hall, many bedrooms and conference areas, a large kitchen and dining area and even an apartment for a live-in caretaker. With its wood-coal stove, secret bar and art collection rivaling any found on campus, the Chateau aims to live up to its namesake, the birthplace of Marquis de Lafayette in Clermont-Ferrand, France.

The house has deep roots in the Kirby family legacy. Allan P. Kirby, a member of Lafayette’s class of 1915 and a Trustee beginning in 1937, built the house after being inspired by a trip to France. Designed by Pennsylvania architect Donald Innes, the house’s construction was completed in 1935.

Especially at the time of its completion, the Chateau’s hilltop location allowed for beautiful views of the nearby mountains and valley, according to Thomas Lannon, director of special collections and college archives.

To Kirby, however, the house’s most important view was likely of Fisher Stadium. Kirby frequently entertained alumni guests at the Chateau, where they could watch the football team’s home games in comfort. And the Chateau’s dormitory-style bedroom on the upper floor reportedly housed the football team the night before important home games.

“[The Chateau] was something like a field house before there was a field house,” Lannon said, emphasizing Kirby’s belief in the combination of athletics and scholarship.

Kirby also hosted guests for the Board of Trustees and other business meetings and for class reunions. One alum wrote in Lafayette’s alumni magazine in 1937 that thanks to their summer retreat, “We no longer envy the class of ‘15 in the Kirby Chateau.”

Kirby passed away in 1973. In August 1983, the Chateau was endowed and donated to the college by Kirby’s children, who at the time were the directors of the F. M. Kirby Foundation.

A 1983 press release from Lafayette’s public information and community relations office stated that the Chateau was to be used for “purposes relating to the college’s educational mission.” An internal memo specified the four ways the Chateau was meant to be used: for meetings and retreats where “separation from the campus routine and activities is desirable,” for meetings of the Board of Trustees and the Alumni Association, to accommodate overnight guests such as visiting lecturers and to entertain guests “under special circumstances.”

The Chateau was never meant to host large groups. According to the memo, occupancy in the Chateau must not exceed 50 people, and there are only 9 available parking spots.

The F. M. Kirby Foundation established a $500,000 sustaining endowment for the maintenance of the Chateau, according to a 1984 article in the Lafayette Alumni Quarterly. The article also estimates the gift of the building and its care to be worth $1.25 million.

Caretakers once lived in the house’s live-in apartment on the lower floor. Anna and Wilhelm Ferraretto were caretakers of the home for many decades, according to a 2014 note left by their daughter, Silvia, who lived in the home from 1954-the mid-70s. Wilhelm passed away in 1976, and Anna stayed at the estate until 1983 when it was given to the college. In her note, Silvia wrote that she was returning to Easton to put her mother to rest and leave some of her remains on the grounds of the Chateau.

“Marie [Enea, former assistant to the president] was kind enough to give us a brief tour and it brought back many fond memories. ‘I know this place, I know it well ~ every sound and every smell. This was home to me,’” Silvia wrote.

Scott Kennedy, director of facilities operations, could not recall the last time a live-in-caretaker lived in the house. The property is now maintained by the college’s grounds crew and cleaned regularly by facilities, especially before a big event, he explained.

The Chateau’s unique style, however, leaves some questions unanswered. Lannon explained that although it was built in the 20th century, its gothic architectural features are more associated with 19th-century building styles.

“I would use the word anachronistic. It has an anachronistic style in that it’s both medieval and modern, it’s a residence but it’s grand…It has a really wonderful art collection, but it’s a private residence,” Lannon said. “So it does have this kind of curious character that makes it special and not exactly clear, is it a public space or is it a private space? Is it historical or is it contemporary? And it blends these spaces and makes it more like something you have to experience.”

Kirby’s interest in art related to the Marquis de Lafayette is evident by looking around the Chateau. Lannon explained that Lafayette was important for American independence, which was important for business people such as the Kirbys in the twentieth century, as they saw their role as inheriting a civilization they wanted to protect.

“Kirby saw Lafayette as a friend of American independence and want[ed] to be associated with that history because it’s that history that has allowed him and his family to flourish,” Lannon said. He elaborated that the philanthropic acts of the Kirby family overall are tied to a spirit of ensuring democracy is possible through education.

One decoration on the wall may be of particular interest to students: a $10 tuition bill from 1855.

Since the Chateau was gifted to the college 38 years ago, it has hosted events such as music performances, student government ceremonies, honors convocations, and receptions, according to reports in The Lafayette. Since at least the early 1990s, tours of the Chateau have been offered at Family Weekend, most recently conducted this year by Lannon.

Today, however, only a handful of students have been to the Chateau, including those who attended student government gavel passing ceremonies in 2019 and 2021.

One of these students, Lauren Ameruoso ’22, said that “Aside from being super beautiful, there’s so much history to [the Chateau], and it’s just underutilized—and a lot of students just don’t even know that it exists.”

President Nicole Hurd said that while she has been to the Chateau once for her interview, she hopes it will continue to be used as a community space.

So although the Chateau no longer hosts riveting home game-viewing parties, it still represents the history of the college as something sacred and uplifting, right here on the hill where so many Lafayette alums have lived, learned and returned.