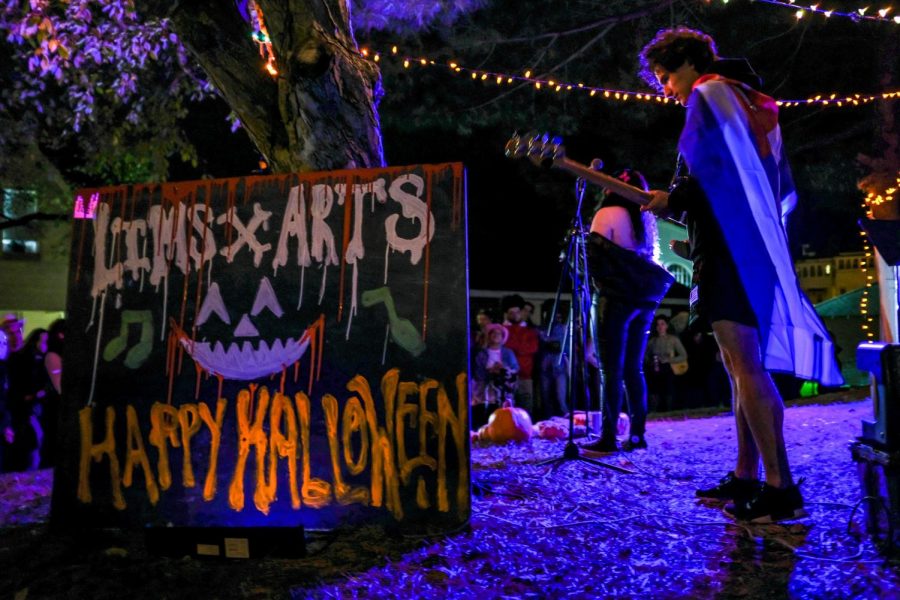 The stage at 643 Parsons Street was filled with pumpkins, lights and a sign made by Ava Gaulkin '22 for the concert organized by the Lafayette Interdisciplinary Music Society. (Photo by Caroline Burns '22)

As dusk settled on College Hill this Halloween, the 643 Parsons Street Backyard was filled with ghosts, ghouls and other costumed attendees for “A Parsons Street Halloween Show.” Cosponsored by the Arts Society and the Lafayette Interdisciplinary Music Society (LIMS), the show began at 7 p.m., kicking off an evening filled with music and fundraising for the Arts Society’s music scholarship fund.

Headliners for the show were Lafayette’s musical acts Suspiria, Abi Olofin ’22, Will Shelton ’23 and Lizard Lady. In between sets of garage punk, Afrobeats, R&B, alternative rap and indie grunge, host Lizzie Gumala ‘22 kept the air buzzing with energy, rivaled only by the echoes of the audience singing along with performers once they began.

Working behind the scenes of the show was Cole Raymond ‘22, a founder of LIMS.

Live music has always been important to Raymond. He couldn’t get enough of the concert scene in high school, attending and playing in shows throughout his four years. Once arriving at Lafayette, however, Raymond attended only one live music event during his freshman year: a Dolly Spartans concert hosted by the college radio station, WJRH. It was there that he met Calvin Sharp ’21 and Kosta Voiklis ’21, who shared his sentiment of wanting more live music events on campus, according to Raymond.

The three students knew there had to be on-campus artists who also needed a space to perform. From there, LIMS was born.

“I love giving people a space to try it out and see if [performing for others as their own artist] is something they really like… and they fall in love with it. That’s the best thing, that I can bring that to people,” Raymond said.

The importance of having a space for live music was not lost on the show’s performers. “While we were practicing, we each had a moment where we realized how much energy we were bringing to the table and we couldn’t wait to share it,” headliner Shelton said.

“Live music is the best way to experience that art form. It’s very improvisatory and in the moment, there’s such an exchanging of energy between artist and audience. Most importantly, the experience is going to end. You have to enjoy it before it’s over,” Shelton said.

For Téo ‘24, a guest rapper during Shelton’s set, live music is important because “you get a connection with the audience and it is, overall, a different atmosphere when you are performing live.”

While Raymond plays a part in the success of these shows, he expressed that his biggest goal and the overall purpose of the club is to get more students involved in the live music scene and to introduce them to the idea that they “don’t have to be signed by a management company or know some special people to play live…they can do it on their own.”

“Seeing others become passionate at the end of each show and asking to get involved in the next one is the best thing,” he said.

Alongside throwing LIMS-coordinated concerts and collaborating with various student organizations, LIMS also hosts a Free Agents list where Lafayette students looking to start or join a band can get connected with other artists across campus. To be added to the Free Agents list, students can email Cole at [email protected]. To stay up to date with LIMS, students can follow their Instagram page, @limsorg.

The next LIMS event in collaboration with WJRH will be held on Nov. 19. It will be headlined by the New Jersey band Mojohand.

Raymond urged students to face the anxiety of performing live.