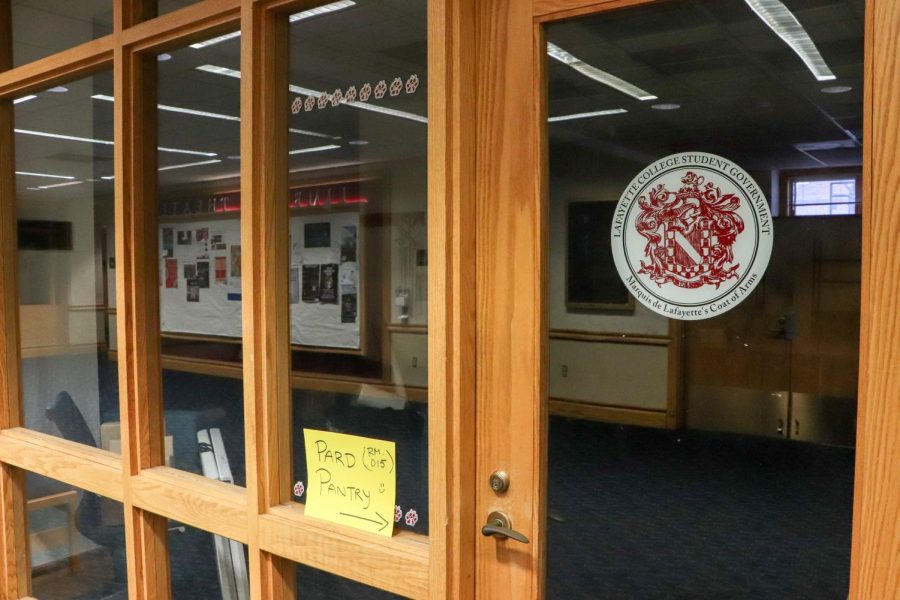 Student Government is considering consolidating the budget applications into semester or quarterly requests instead having both annual and as-needed requests. (Photo by Baris Yazici '25)

Lafayette’s Student Government recently sent out an email to all student organizations urging them to use their annual budget before asking for additional funding. The email emphasized that the budget committee will start being more conservative when delegating supplementary funds.

Student government allocated $1.1 million to all clubs so far this semester and $50,000 has been used.

“There’s clearly a lot of this money that’s still floating around out there and we think it would be best if clubs can work with us to see where that can be redirected to,” Student Government Treasurer Michael Butler ‘22 said. “We just want to encourage clubs to spend the money that they’ve already been given because we only have so much money.”

President of Student Government, Flor De Maria Caceres Godoy ‘22, noted that it is important for them to prioritize continual funding of clubs that didn’t get an annual budget over clubs that received money at the beginning of the semester.

“We’re trying to prioritize funding, at least for clubs that haven’t asked us for money yet, to make sure that we have enough money for them and their events as well,” Caceres said. “We are asking other clubs to be mindful of not spending too much to take into account that there are other organizations besides just their own that will need this money for whatever reason.”

Butler explained that the way Lafayette Student Government apportions funding for clubs is unique and can become messy easily. While many other institutions do either an annual budget or funding on an as-needed basis, Lafayette does both. This results in confusion regarding what money is dedicated to which aspects of an organization.

“I think we’re kind of running into a natural point where it’s getting a bit tougher to balance than it has been in the past,” Butler said.

Looking ahead, both Butler and Caceres expressed the possibility of changing this model, possibly consolidating budget applications into semester or quarterly requests instead of having both annual and as-needed requests.

“We had talked about potentially moving to a model where groups would request money ahead of time,” Butler said. “So kind of like an annual budget, but not once a year, more than that, just to have clubs sort of plan ahead for what they’re doing and to be able to sort of allocate that money and not have this back and forth of some clubs who have planned out their entire schedule for the entire year.”

Echoing Butler, Caceres noted that the switch to a shorter budget that is still planned ahead of time would allow both clubs and Student Government to stay within budget.

“We’re in the process of seeing if we can revamp that process of asking for money, maybe semesterly rather than annually, because I think that’ll at least lift up part of the burden that organizations have in terms of not knowing how much an annual budget would actually be,” Caceres said.

However, in spite of the difficulties and incredible increase of spending this academic year, Student Government is not out of money. There is a reserve into which the budget committee is able to dip, despite this not being ideal.

“We do have a reserve in case things like this happen and we still have plenty of money there, but this is more than we’ve spent in the past,” Butler said.

“We haven’t exactly run out of money; maybe we will if we keep spending too much money,” Caceres said. “So we’re…asking clubs to reevaluate their own expenses and then get back to us to make sure that we still have enough money for them for the Spring semester.”

In terms of the cause for the excess of spending this year, Butler and Caceres both attributed it to the COVID-19 pandemic. The pandemic stopped many in-person events, so organizations did not have to go through the process of requesting nearly as many funds. Many of the club’s executive boards have never had experience requesting money from Student Government.

“I think that new club treasurer’s that are coming in don’t know one hundred percent how to request the funds because the transfer of knowledge from previous treasurers to current treasurers has been a little bit rockier,” Butler said.

Furthermore, the pandemic starved many students of their usual social interaction, so when clubs and organizations were able to resume in-person programming, they overestimated the funds needed due to their excitement at being back.

“People were virtual or hybrid, so there weren’t many events happening in-person, and if there were, they had to meet certain mitigation plans through the school,” Caceres said. “Now we’re trying to assume this new normal where we’re still under the same pandemic and anything could change any time, so that’s why I think clubs are smart enough to take advantage of doing certain things.”

Caceres noted that clubs being more conservative now will only help them in the long run when they need more funds in the future.

“We’re happy about funding, but we’re asking people to not [request money] too much…we need that support from different clubs and organizations to make sure that we still have money in our budget so that we can support them in the long run,” Caceres said.