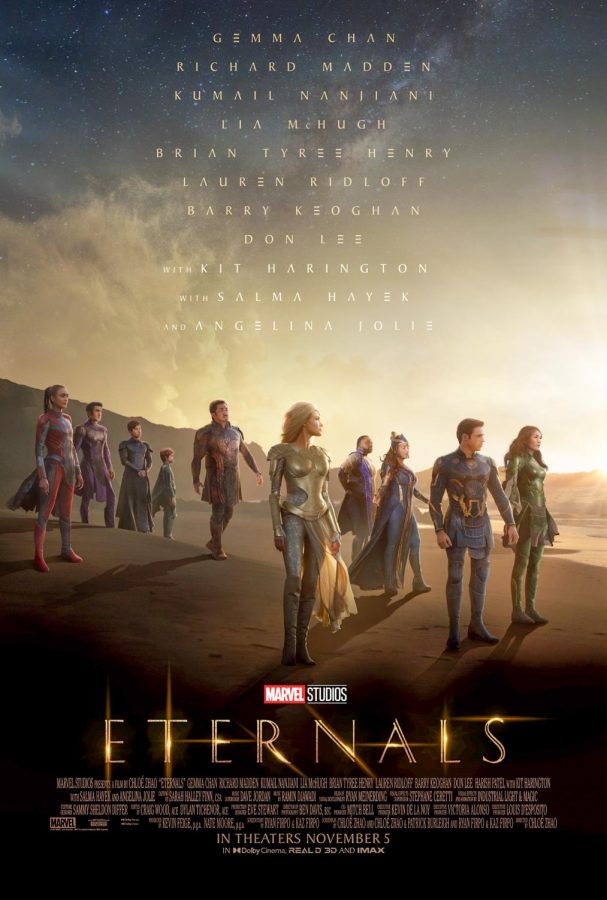 'Eternals' tells the story of a group of superheroes who have secretly resided on Earth and must come out of hiding to preserve mankind. (Photo courtesy of IMDb)

“Eternals” is a perfect example of what it looks like to tell a story externally rather than internally. It doesn’t matter how well a scene is filmed, how nice the sets look or how many famous cast members are put on the screen if the audience leaves the theater feeling absolutely empty inside, completely disconnected from what they just saw. While “Eternals” has a creative premise on paper, it is ultimately a poorly paced concoction of superhero clichés that offers little to keep the viewer invested.

The Eternals are a group of superheroes who have secretly resided on Earth for thousands of years but have chosen not to interfere with the progression of mankind. This changes when a being called Arishem proclaims to the Eternals’ leader, Sersi (Gemma Chan), that it is time to destroy Earth so that a celestial being can finally emerge. Called to action, the Eternals must come out of hiding to preserve humankind.

The problem with Eternals is not its premise, but its lack of characterization. There are so many heroes introduced in the movie, but we know little to nothing about any of them. The movie doesn’t even fully explain what powers each of them has. The most clearly defined character is Ikaris (Richard Madden), but he is a blatant copycat of Superman, flying across the screen without any charm whatsoever. I was shocked by this movie because cast members like Angelina Jolie, Richard Madden and Kit Harrington, who are some of the most likable actors working in Hollywood, are all boring in this film because they don’t have any interesting dialogue or hero archetypes to work with.

The other aspect that doesn’t work with this film is its editing. The film constantly cuts back between past and present in an incoherent fashion that makes the story very difficult to comprehend. You really have to pay attention to understand what’s going on, but the film is so unengaging that you constantly don’t want to. It baffles me that many films these days don’t have the confidence to tell a story without unnecessary flashbacks and flash-forwards.

By contrast, “Eternals” has 12 main characters that share similar amounts of screen time. Even with its lengthy two hour and 38 minutes run time, it’s just very difficult to tell a story with that many people.

Ultimately, the problems of this film make for a painfully average and lackluster experience and one of the most disappointing films of the year. My recommendation: pay the same price to see hundreds of better superhero films on Disney + or watch “My Hero Academia: World Heroes’ Mission” in theaters instead.