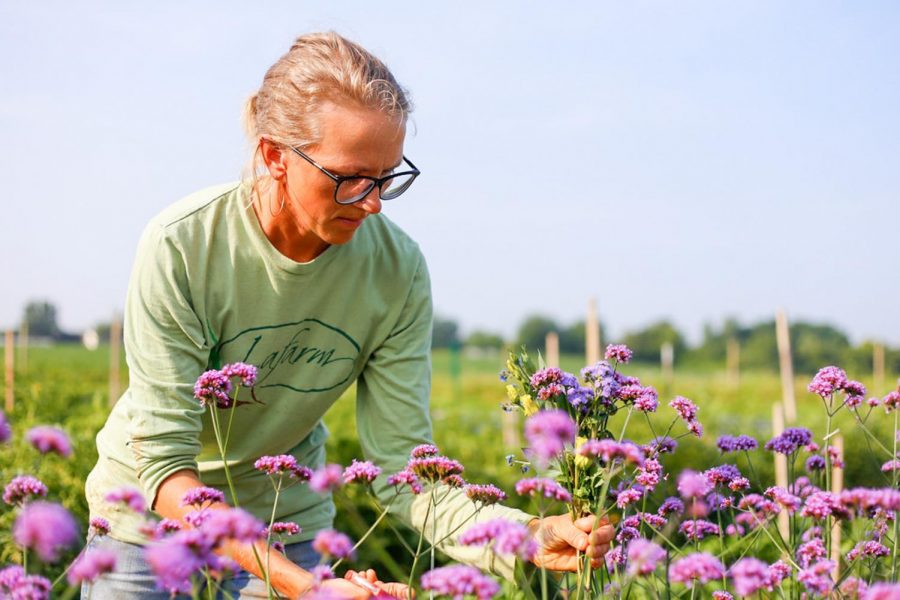 Miskelly is leaving LaFarm for a position with the Pennsylvania Association of Sustainable Agriculture. (Photo courtesy of Lafayette College Flickr)

The Lafayette community will be saying goodbye to a key figure in the college’s sustainable food and dining program as Lisa Miskelly, the assistant director of Food & Farm, recently announced her departure from the LaFarm program.

Miskelly’s next step will be working for the Pennsylvania Association of Sustainable Agriculture as a coordinator for heir statewide pre-apprenticeship programs at colleges and high schools across Pennsylvania. She will work in communication with educational-based farms similar to LaFarm.

“I’ll be working with these programs to help them gain the skills they need to be successful farmers and getting a lot of these educational farms that want to be in the apprenticeship program on the same page,” Miskelly said.

Under Miskelly, LaFarm has grown from a grassroots organization to a fully-fledged farm with dedicated staff and students.

Founded in 2009 by a group of faculty and a graduating member of the senior class, LaFarm is an integral contributor to Lafayette’s food supply, while also distributing goods to other venues throughout the Lehigh Valley area. LaFarm has been the launching pad for many sustainability initiatives and environmental programs on campus, including the creation of the Office of Sustainability.

While Lafayette students may visit LaFarm for a class project, field trip or volunteer requirement, many student volunteers work with LaFarm on a regular basis, helping with food production, delivery and farm upkeep. Miskelly attributes LaFarm’s existence and success to Lafayette students.

“Students are Lafarm,” Miskelly said. “If there wasn’t student passion and interest in farming, the farm could not exist.”

Students who volunteer at LaFarm engage in a mutually beneficial experience. While they help keep the farm functioning, they also learn vital information about local food production, land management, composting and the origin of the food that we eat.

“For students who participate, the farm brings to light what goes into food production. You see in this very direct way how a bean, a beet, or a carrot gets to your plate, and all the pieces are that are involved in it,” Miskelly said.

While LaFarm has flourished over the years, this growth has not been without its challenges. The farm’s composting bins, known as Earth Tubs, have been in use since 2009. However, they are no longer being manufactured, as the composting system has faced numerous complications. LaFarm had to pause their composting program for a few years, during which the tumblers sat unused in the sun.

“We have ongoing problems with the Earth Tubs,” Miskelly said. “Currently, we have one Earth Tub that isn’t working at all. That could potentially change as early as next week, but it could also be a longer-standing problem.”

Transportation and making the farm easily accessible for all students has also been an ongoing hurdle for LaFarm, which is located a few miles off campus and requires a long walk to get to. A shuttle funded through the Athletic Department provides transportation to Metzgar, the stop closest to LaFarm. However, the shuttle is primarily for student athletes.

“The LaFarm timeline doesn’t always line up with the shuttle times, and there isn’t a shuttle that goes to LaFarm,” Miskelly explained.

“There’s a constant conversation happening between myself, faculty, students and the administration looking for support for the farm, and transportation is one of those pieces, and trying to figure out how we make it work.”

All in all, Miskelly was proud of the work done at LaFarm.

“You have all contributed in incredible ways to LaFarm, as a place, as a program, and as a group of humans doing meaningful work together in this strange world that can sometimes be hard to be a loving human within. And you have also helped me to grow in this role and as a being in such a myriad of beautiful and challenging ways,” Miskelly wrote in a departure email to the LaFarm team. “Thank you for all you have offered me over some portion of the last four years here, and thank you for caring about soil, caring about people having access to culturally relevant and nutritious food, and cultivating a culture of care with me at LaFarm.”