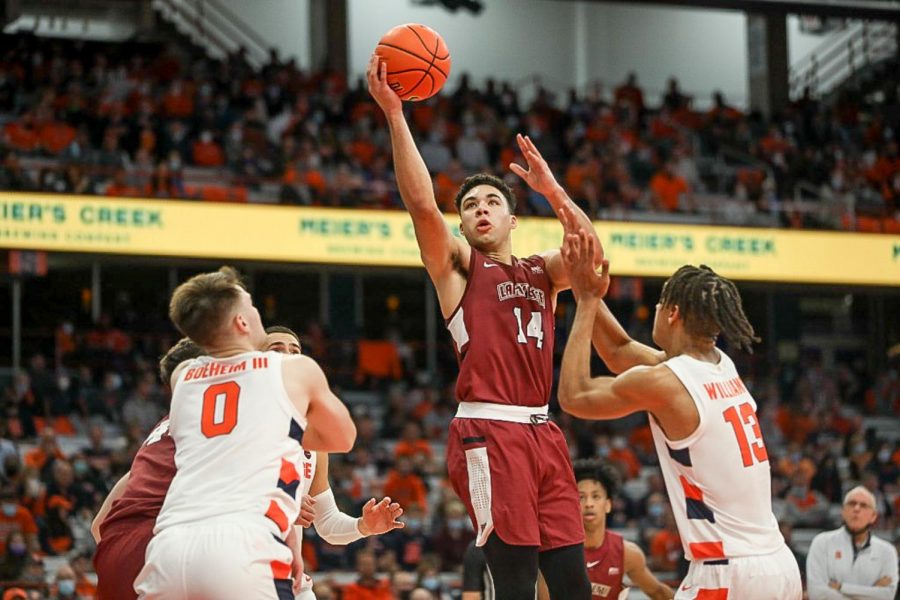 The Lafayette men’s basketball team played their first non-league game of the season this past Tuesday in Syracuse, N.Y. The Leopards fell to Syracuse 97-63.

“Not only were they in a different league, but they’re a much bigger school,” senior captain and guard Jay Vaughan said. “They’re one of the top five leagues in the nation.”

Lafayette successfully won the opening tip, and junior forward Leo O’Boyle kicked the game off with a three-pointer, giving the Leopards their only lead of the game.

O’Boyle was one of the three Leopards to make double figures on the day, tying for the team-high of 14 points.

“He made some big shots that kept us going early,” Vaughan said.

The Orange proceeded with an 11-1 run and then another 13-0 outburst midway through the first half. Jenkins scored a triple to put an end to Syracuse’s run.

Toward the end of the first half, Perry scored five straight points, and freshman guard Devin Hines also made one of his two successful threes during an 8-3 run for Lafayette.

“[Hines] came in off the bench and gave us nine points and a lot of good energy,” Vaughan said. “I think [Perry] played really well, he had a couple of nice shots and really pushed the ball well.”

Syracuse started the second half strong with a 10-2 run.

“I think something that we could do better would be continuing to worry about ourselves and not the other team, and focusing on getting better as a team individually as well as collectively, in order to win games in the coming weeks,” Vaughan said.

Lafayette’s final outburst included a three from sophomore guard Eric Sondberg and a transition layup from Jenkins which forced the home team into a timeout.

Syracuse ended the game up by 34 points and shot over 50% from the field as a team.

“Overall, I think everybody made the right plays when they could and we competed pretty hard,” Vaughan said.

All 14 Leopards saw playing time and every freshman made their collegiate debuts.

Despite the outcome of the game, the team enjoyed being able to play in the Carrier Dome.

“It was really cool to play in a big gym with a nice atmosphere. It was kind of different from what we’re used to in Kirby Sports Center, so it was a really cool experience going up to Syracuse,” Vaughan said.

The Leopards now look towards their home opener tonight at 7:30 p.m. against Cornell in the Kirby Sports Center.

“We need to improve this week and fine-tune some things that were wrong from the last game,” Vaughan said. “It’ll be a good test for us.”