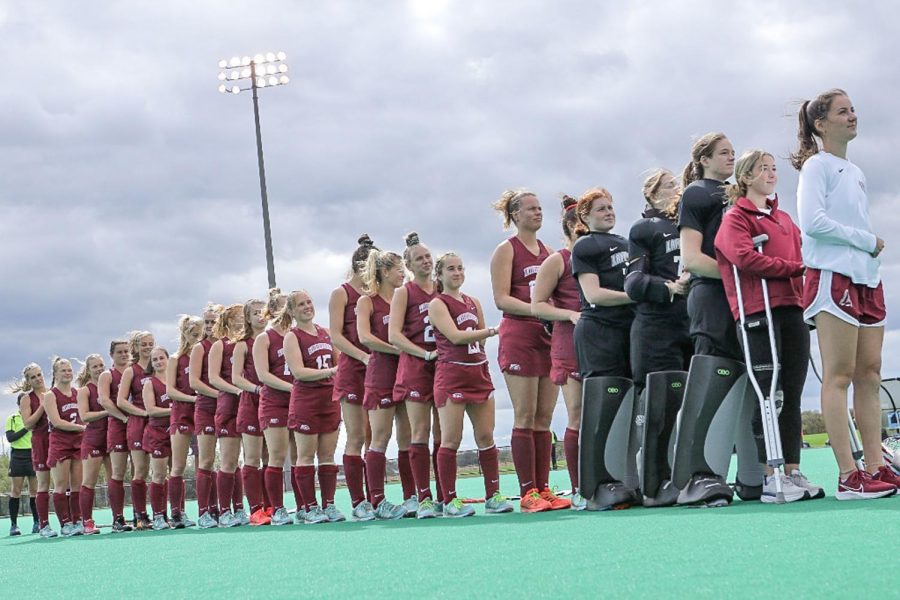 Lafayette field hockey put up a good fight against No. 1 seed American in Patriot League Championship in Washington D.C. but are unable to clinch the win. (Photo courtesy of GoLeopards.com)

Lafayette field hockey (14-6 overall, 4-2 Patriot League) made it to Patriot League Championship after a thrilling win against Bucknell 4-3 in the semi-finals on Nov. 2. However, the Leopards fell to No. 1 seed American 2-1 in the championship game on Nov. 6.

In 2019, the Leopards were in the same position, as they faced the Bison in D.C. for the semi-final game.

Head coach Jennifer Stone expressed that although it was a similar situation that they had already been in, focusing on the present is important, as well as making sure they walk off the field, “feeling really confident and comfortable with a strong performance.”

“It was obviously super exciting, it’s been a lot of work put into this but the team is a huge contributor,” Sawers said.

“[Spaans] came in and made an immediate impact. She’s so fun to watch and so fun to play with,” Sawers said. “It’s so awesome to see the program going in that kind of direction.”

Although these awards were individual, Stone echoed Sawers in emphasizing the role of the whole team in achieving them.

“I’m really proud of both of them,” Stone said. “It is incredibly well deserved and it’s certainly nice for them to be recognized. It’s a testament to the team since you can’t earn individual awards without the success of the team.”

Senior captain Molly McAndrew scored the first goal on Thursday early in the first quarter. The Bison answered back minutes later to bring the score to 1-1.

Neither team found the net for the rest of the first half, but Bucknell managed a goal in the third quarter to gain the lead.

Spaans balanced the score at 2-2 with 11:35 left to play in the final quarter of regulation.

Before thoughts of overtime, Bucknell managed to convert a penalty corner past senior goalkeeper Hailey Abbott with just under seven minutes left to play.

The Leopards answered as Spaans ran the ball down to gain a last final scoring opportunity. Lafayette’s corner was successful, extending the semifinals into sudden death overtime.

Lafayette ended Bucknell’s season in less than three minutes of overtime with another corner shot. Sawers was credited for her second overtime game-winner versus Bucknell in the past week alone.

Lafayette then went on to face No. 1 seed American on Saturday, in which both teams put up a strong showing.

The Leopards came out strong in the first quarter with successful outlet passing and sharp communication. While Lafayette continuously commanded possession of the ball, it was American who was able to score first with just 30 seconds left in the first half.

American scored again in the third quarter, but Lafayette was not ready to quit. Junior forward Felicitas Hannes was able to sweep the ball over American’s goalkeeper in the third quarter, but it was not enough. This was the only goal of the day for the Maroon and White, leaving the score at 2-1 to conclude their final game of the season, finishing as Patriot League Runners Up.