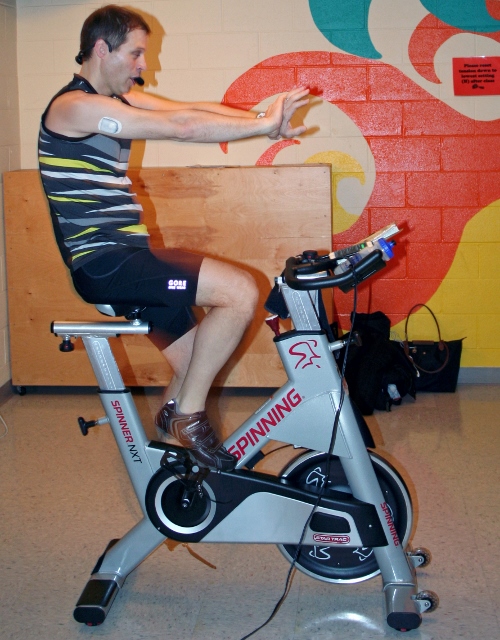 The overhead lights were off, a disco ball was spinning, and Dean of Students Paul McLoughlin II was singing along to Katy Perry’s “California Girls.” It was not a party, but McLoughlin’s cycling class, which he teaches Monday nights in between his job as an administrator at the college and as an advisor to Student Government.

According to Assistant Director for Fitness Programs Karen Howell, McLoughlin’s class is one of six Group Fit programs offered weekly at the Allan P. Kirby Sports Center at Lafayette. The classes, the most popular of which are Zumba, Body Pump, and Cycling, are free for students. Although some classes are taught by outside trainers, the most popular ones are taught by administrators, staff, and students at the college.

Attendance at Group Fit classes has grown steadily over the past three semesters, Howell wrote in an email. Students can reserve a spot in each of the Group Fit classes up to 24 hours before the start of the class and classes sometimes fill up in under an hour, she wrote.

If students do not get a spot in the class, they can get a FIT ticket to place themselves on the waitlist, in case a spot opens up.

McLoughlin, who has been spinning since graduate school when it was just becoming a craze, said that when he started at Lafayette, he wanted to bring cycling with him. He proposed the idea to Howell, who had already been considering starting a program at the college. Today, there are four cycling classes a week at Lafayette.

At one point, McLoughlin, who is also scuba certified and has run several triathlons, taught cycling multiple days a week, but now he sticks to one class every Monday.

Monday nights, McLoughlin said, are particularly challenging due to low energy levels among the people who take his class. To remedy this, McLoughlin said he puts a significant amount of time into creating a playlist for the class, which includes mostly electronic dance music.

This tough love shined through during his workout on Monday.

“I know that some of you who are new may wonder why the fan’s not on,” McLoughlin said. “You have to work for the fan.”

Students in the class did work. As the tempo of the music increased, so did the pace of the workout. Following McLoughlin’s lead, students increased and decreased resistance and shifted between sitting and standing.

According to McLoughlin, the first time cycling is the hardest.

“I have said to people please come back four times,” McLoughlin said. “If at four times you say, I still can’t, I do not like it, I will believe you, I will wish you well. But I think after four times, then the kinks have been worked out, you’ve built some muscles. You’re not confused. And then I think the real joy comes.”

For McLoughlin, the joy of cycling is met by an additional joy of instructing a class. He said that teaching cycling allows him to find a balance with his job as Dean of Students.

“There are some days when I feel like my job, that whole day, has been to tell students ‘no’ or to deliver bad news,” McLoughlin said. “That’s never the fun part of the job, but it’s a requirement of it. And I think the nice thing about spinning is that it’s all positive. From minute one to minute 45, I’ll always know that I’ll have 45 minutes of positive energy [and] interactions.”

“I think in a way, it makes me a better dean of students,” he added, saying that because of cycling, he is able to be seen by some students as more accessible.

But McLoughlin is not the only group fit instructor to note interactions with students as one of the most rewarding elements of teaching Group Fit.

Library Assistant Karen Haduck, who has taught group fitness at Lafayette before she became a full-time employee of the college, said that her Body Pump class is an opportunity for her to engage with students in a “completely non-academic way.”

She added that she has taught group fitness for 23 years in places ranging from California to Japan, and that group fitness is the “one constant” in her life.

Alleyah Miner ‘16 has also made group fitness a constant in her life and hopes to make it part of her future.

Miner has been teaching Zumba on and off since she was 15, when she became a certified Zumba instructor. But her most consistent job has been at Lafayette, where she currently teaches two times a week, to packed rooms. Miner, whose classes fill up in 60 seconds, said her ultimate dream is to create her own brand of dance fitness.

As for now, she makes her Zumba class a priority, because she knows her students are counting on her.