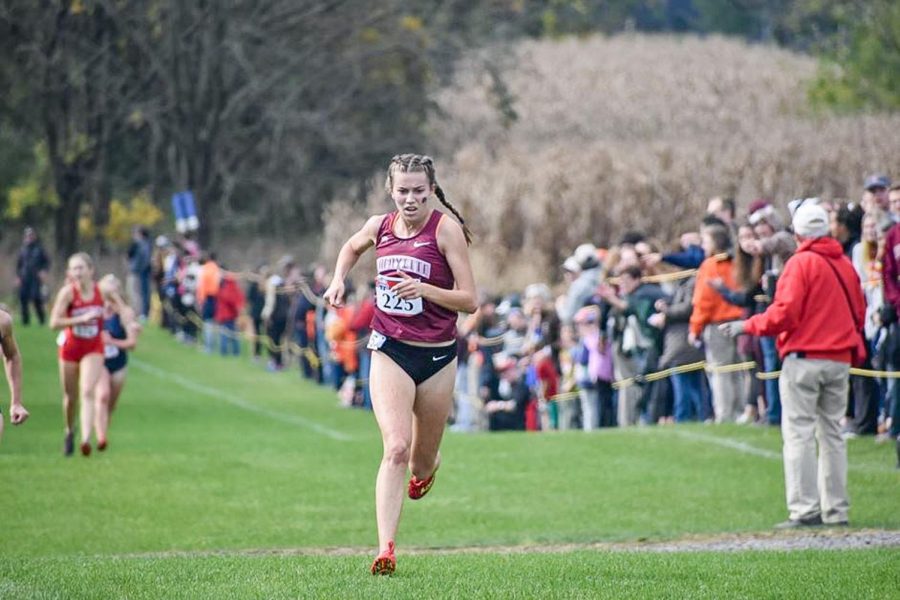 “Before the race, everyone gets pre-race jitters, but something about the start of this race was emotional,” senior Cassandra Wilk said.

“Their race went from an 8k at our Patriot League meet to a 10k, so it added over a mile,” Wilk said, “They did really well, I was really happy for them.”

“During the men’s race, there was a pack in the front of the top runners and then a couple guys in between and then some of our top runners all really close together,” Wilk said.

Princeton set the pace for the men’s race, finishing first over Georgetown by just nine points.

“[Sands] had a goal of being in the top fifty, so she was really happy and excited about that,” Wilk said.

Junior Becky Hartman was behind Sands in 98th place overall with a time of 22:49.1.

“I had tunnel vision for the last eight hundred meters of the race,” Wilk said. “I was thinking this is my last one, I just need to go as fast as I can to the finish line.”

“[Sands] and I were standing at the finish line, and we hugged and she said, ‘I’m so happy that we got to be teammates for four years, I’m gonna miss racing cross country with you,'” Wilk added.

Georgetown set the pace on the women’s side, winning the meet and scoring only 43 points. West Virginia finished second and joined Georgetown as the only teams scoring under 100 points.

“We made little goal sheets at the beginning of the year and we put them in our bags. My personal goal was just to have fun and find something happy about every run because running for me over the past ten years has very much been a love-hate relationship,” Wilk explained. “Even if we were stuck in thirty-degree weather and it was raining, I tried to find something fun about that run and that made the whole season much better.”