Football falls in heartbreaker to Colgate on senior day 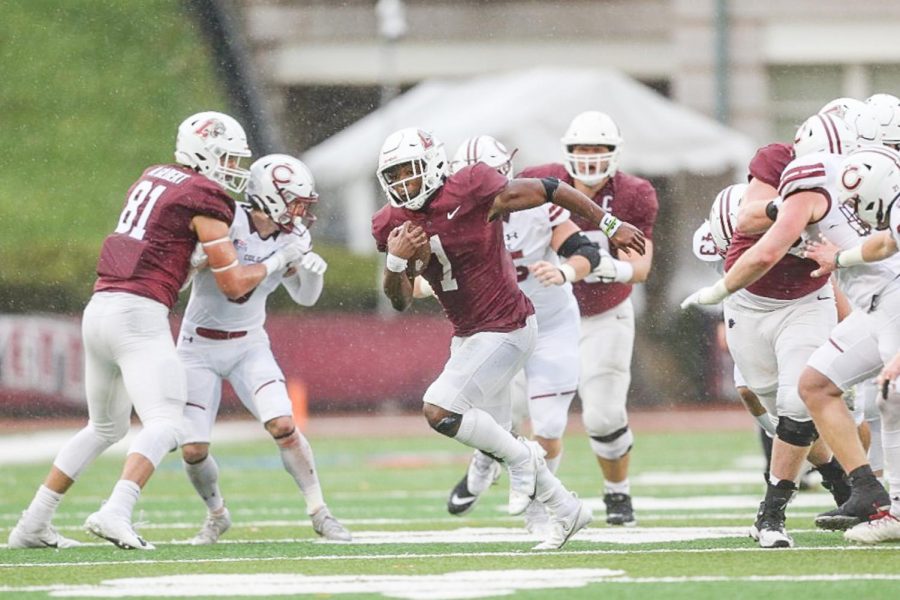 Junior Jaden Sutton (pictured) splitting the defense during his 140-yard performance on Saturday in loss against Colgate. (Photo courtesy of GoLeopards).

The Lafayette football team (3-7 overall, 2-3 Patriot League) fell to the Colgate Raiders (4-6 overall, 4-1 Patriot League) on senior day 20-13 this past Saturday. The Leopards could not overcome the poor weather conditions and missed an opportunity to gain momentum going into the Lehigh rivalry game.

Coming off a 25-point loss to the three-time consecutive Patriot League champions, Holy Cross, in Worcester last week, the Leopards were looking to make a comeback against Colgate but failed to secure it.

Lafayette has struggled during their three-week road stint going 1-2, losing big to Harvard and the Crusaders, and only barely squeaking out a one-point victory against Georgetown.

“We encourage [our players] to embrace the challenges and always respond the right way when faced with anything, whether it is a positive or a negative,” head coach John Garrett said.

The game had a rough start for the Maroon and White as Colgate’s freshman quarterback Michael Brescia broke out for the first score of the game during the Raiders’ first play, taking it 64 yards for the touchdown.

Making his third career start, Brescia ran for 178 yards and threw for an additional 144, earning Patriot League Rookie of the Week for the second consecutive week.

The other player on the field to have earned that honor twice this year, Lafayette’s freshman quarterback Ah-Shaun Davis was not as successful in this game. Battling the rain-soaked ball and 40-degree temperatures, the quarterback could not get anything going through the air for the vast majority of the game.

However, the run game led by junior running back Jaden Sutton picked up the slack as he ran for 113 yards, with 105 coming in the first half.

Lafayette responded to Colgate’s quick scoring drive using a season-high 18 plays to score their first touchdown of the afternoon.

The pinnacle of the drive came on the Colgate 33 yard line on a pivotal 4th-and-1. Sutton put his head down and ran for a three-yard gain, giving the Leopards another chance to score. Senior running back Selwyn Simpson carried the ball in from two yards out to bring the score to 7-6, but a botched snap during the extra point kept the Raiders in the lead by one.

After the defense held Colgate on the next drive to a three-and-out, the running game for Lafayette continued to work as Sutton ate up yards. Sitting on the Colgate 40-yard line, Sutton took the snap on an outside zone breaking down the sideline for a Lafayette touchdown. This time, the Leopard’s special teams converted the extra point to make the score 13-7 with 2:57 left in the half.

Colgate continued to apply pressure just before the half, as Brescia ran for 59 yards to get down to the Lafayette 15. The Leopard’s defense managed to prevent another touchdown but allowed a 25-yard field goal, leaving Lafayette in the lead 13-10 at halftime.

The third quarter began with a similar play as the Colgate offense marched down the field and kicked a field goal to tie it up. From there, the defenses took over the game.

Lafayette was not able to get anything on the offense in the second half, crossing the Colgate 50-yard line one time before the last play of a drive.

Colgate also struggled to move the ball, with their only trip to the red zone was incomplete thanks to an end-zone interception by senior defensive back Jordan Anderson.

With just six minutes left in the game, Colgate took over on its own 21-yard line. Lafayette looked to have bottled them up on multiple occasions during the drive, but a 43-yard pass from Brescia set up Colgate for a touchdown, leaving the score at 20-13 with just 1:27 to go.

The Leopards responded with a two-minute drive that looked promising as they moved the ball across midfield with plenty of time. The drive was stalled at Colgate’s 28-yard line with three seconds left.

Davis threw a Hail Mary pass to the end zone that was batted around, and almost landed in junior wide receiver Julius Young’s hands before hitting the turf.

“We had a hard fight versus Colgate. Two good well-coached teams, they just made one more play than us,” Garrett said. “It came right down to the end, our guys fought hard and they played competitively.”

The Leopard’s will now turn their attention to the most anticipated game of the season, the 157th rivalry game between the Lafayette Leopards and the Lehigh Mountain Hawks (2-8 overall, 2-3 conference).

“Playing in the rivalry game is something special. It is the only rivalry game referred to by the consecutive number that the game has been played, and everyone knows what it is referencing in the Lafayette-Lehigh community,” Garrett said. “I’ve been involved in a lot of rivalries in all my years of coaching, pro-football and major college football. This rivalry is different.”