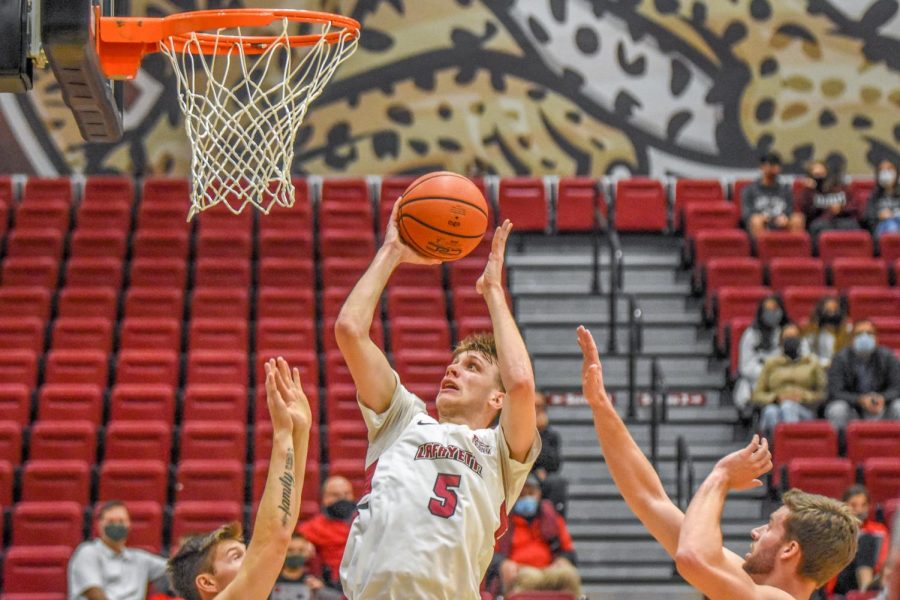 Sophomore Eric Sondberg (pictured) shooting for a layup at Lafayette's first home game of the season against Colgate. (Photo by Cole Jacobson '24)

The Lafayette men’s basketball team (0-3 overall) opened their first home game against Cornell last Friday in the Kirby Sports Center. The back-and-forth matchup was highlighted by a career-high 25 points from senior guard Tyrone Perry, but the Leopards ultimately fell 90-85. Days later the team struggled against the University of Pennsylvania, losing 85-57.

The Leopards started their home game hot, leading in the early minutes 11-5. Their lead was soon contested when Cornell matched the score and pulled ahead by eight points by the end of the first period.

Perry kept the Leopards in the game early with two four-point plays, after he was fouled on two successful three-point attempts and made both of his free throws. The four-point play is incredibly rare in basketball, and it showcases Perry’s shooting ability and composure.

Storing contributions from junior forwards Neal Quinn and Leo O’Boyle as well as sophomore forward Kyle Jenkins allowed the Leopards to compete up until the final seconds of the game.

Jenkins and Perry gave the Leopards momentum entering the second period as they connected on back-to-back three-pointers early in the half. Jenkins recorded 14 points and seven rebounds in the outing. O’Boyle racked in another 19 points for the Leopards as well as five rebounds.

With just over ten minutes left in regulation, Quinn helped Lafayette edge out Cornell in a 10-1 scoring run, bringing the score to 62-59. Quinn recorded a double-double with 19 points and a career-high 13 rebounds as well as five assists.

Cornell was not satisfied, getting a second burst to lead by eight. That tally was soon contested by the Leopards as freshman guard CJ Fulton asserted himself with five straight points, including a three-pointer which cut Cornell’s lead to four.

Saturday’s final minutes were promising, thanks to big buckets from Jenkins and Quinn. The crowd was on the edge of their seats as the Leopards came within two points twice in the final two minutes of the game.

Ultimately, Cornell’s three-pointer following a timeout late in the game was the final play. While Lafayette outscored the Big Reds 43-40 in the second period and shot 13-of-14 from the free-throw line, it was not enough to capture the win.

The heartbreaker in Kirby Sports Center was followed by a 85-57 loss to the University of Pennsylvania in the Quaker’s home opener on Tuesday, Nov. 16.

Penn led the game early 9-0 until sophomore guard Jon Brantley ended the Quaker’s unanswered points with six of his own early in the first period. Brantley reached double figures for the first time in his career with 11 points.

Quinn hit his second career triple to keep the Leopards in the game. Quinn scored 14 points on the day with six rebounds and four assists. The first period ended with the Quakers on top, 40-26.

Early into the second half, Lafayette forced Penn into a timeout after five straight points from Quinn and Perry. Perry had eight points and three rebounds, while Jenkins reached double figures for the third consecutive game with 12 points.

The Leopards continue their road games against No.7 Duke tonight, Nov. 19 at 8 p.m.